the Southerner Online • May 7, 2019 • https://thesoutherneronline.com/71708/sports/quinaliza-draws-on-experience-to-guide-jumpers/ 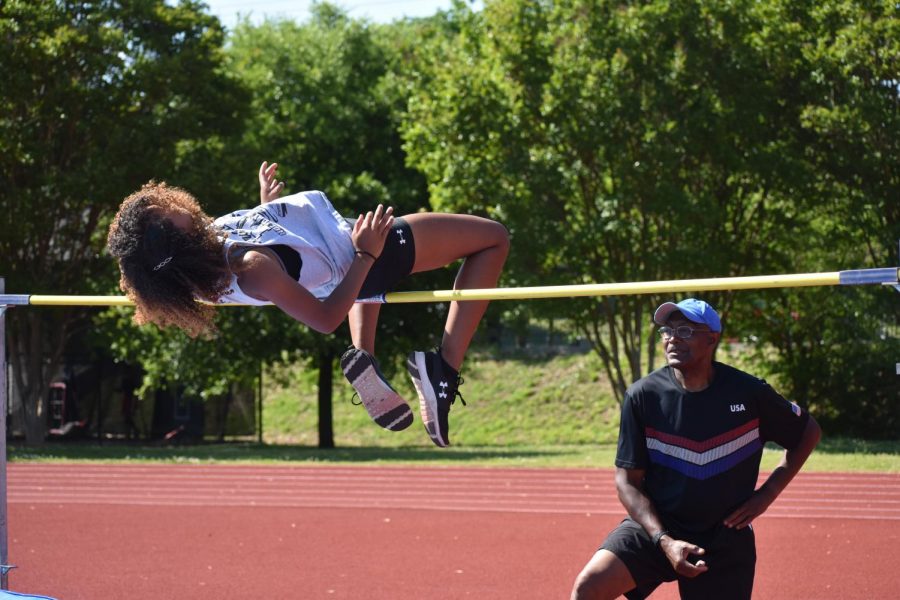 The sun blazes down on the crimson rubber beneath his feet as he sprints down the 1.22 meter wide lane preparing his motions: a hop, a step and a jump. The mark is 16 meters 47 centimeters or 54-0.425 feet, a personal best for him in the triple jump.

The athlete is 57 year-old Ecuadorian, triple jump Olympian and Grady track and field jumps coach Jose Quinaliza. Quinaliza competed in the 1988 Summer Olympics, the 1987 Pan American Games and in over 27 other international triple jump competitions. His most recent was the World Masters Athletic Championships in Poland in March where he placed first in the triple jump for his age group, jumping nearly 41 feet.

He was introduced to the triple jump event late, around the age 18. However, Quinaliza’s determination and athleticism allowed him to quickly rise to high levels. Shortly after completing high school, he competed in the Pan-American Games in Indianapolis in 1987 and the 1988 Olympics in Seoul, South Korea. These events turned out to be his two biggest athletic accomplishments, as well as his numerous competitions in World Championships.

Competing in the Olympics is any athlete’s holy grail and even though Quinaliza finished 25th out of 45 athletes, he considered the Olympics as indescribable and a great learning opportunity.

Quinaliza moved to the United States in 2001 and to Georgia in 2003 where he taught Spanish at Turner Middle School (now Kipp Atlanta Collegiate). It was there that he met current boys head track coach Delbert Ellerton, who was a first-year teacher at Turner at the time.

“The main thing was his level of experience and knowing that I’m trying to start a new program — you want to surround yourself with the best possible people, and he was right there working in the same building with me,” Ellerton said.

Quinaliza has been coaching at Grady since 2004, and has achieved numerous successes.

“I put my jumpers in the state championships every year,” Quinaliza said. “So, they have about 60 athletes [in Class 5A], and I want my jumpers to finish in the top eight.”

Ellerton appreciates the consistency of Quinaliza, and knows it benefits the team every season.

“It [his success in coaching] is impressive, especially when it’s done consistently, and a cornerstone of our program is to try and have consistency from year to year,” Ellerton said. “Year after year, he has been able to bring out of kids things that they didn’t know they had [in] themselves when they first came out here, and that is a testament to just being able to reach and being able to touch and being able to motivate and inspire them, and that’s really what coaching is about.”

His successes lay with his high jump, triple jump and long jump athletes who also credit him with much of their success.

“When I first came here, I didn’t triple jump, and when I got here, my first triple jump was like 40 foot, and from then on he, worked me up to like 6 more feet, so l’m at 46 now, and we still got two weeks left [until sectionals] and I’m expecting to PR [personal record] and get better marks,” senior track and field athlete Dekairi Brown said.

As for his coaching style, Quinaliza draws mainly on his experiences and likes to experiment with new ways to coach.

“He’s very personable, and he does a lot of original things,” Ellerton said. “He doesn’t necessarily go by textbooks or how you’re ‘supposed’ to teach jumps. A lot of things that he’s doing, he’s doing from trial-and-error and just from his own experiences, and he applies it to the kids, so he’s very original in what he does.”

Additionally, it’s helpful that Quinaliza is able to demonstrate and practice the jump movements with his athletes.

“The thing about him is that he can get out here and do[the jumps],” Brown said. “Most coaches can’t get out there and do it themselves.”

It is not just Quinaliza’s coaching and accomplishments that make him stand out, but his ability to work with his athletes.

“He helped me grow as a person,” sophomore high jumper Ethan Pickett said. “He makes me mature and take things seriously in life because I’m not going to just high jump my whole life, I need to get a job, work, business, stuff like that.”

Quinaliza’s ability to work with his athletes can be attributed to his discipline and  his easy-going personality.

“You can relate with him,” freshman long jumper Omari Bien-Aime said. “He’s easy to talk to. Over the past couple of months, I have grown kind of close to him. He’s a cool coach.”

Bien-Aime has also improved his jump since he started working with Quinaliza, adding 2 feet 8 inches to his long jump this year, and qualifying for the sectionals meet as a freshman. Quinaliza’s unique coaching style was at the core of the improvement.

“He just does his own thing, and it seems to work, and year after year, we have jumpers,” Ellerton said. “Some kids come out here who haven’t jumped before, and every year, by the end of the year, we have quality jumpers that are going to be competitive, and it’s been like that every year since he’s been here.”

Beyond coaching at Grady and competing at a high level himself, Quinaliza also helped as head track and field coach for the Special Olympics in Anchorage, Alaska from 2010-2012.

With his wide range of accomplishments in track and field, Quinaliza aims to continue to coach and compete as long as he can.