the Southerner Online • May 3, 2019 • https://thesoutherneronline.com/71672/lifestyle/school-related-meme-pages-entertain-students/ 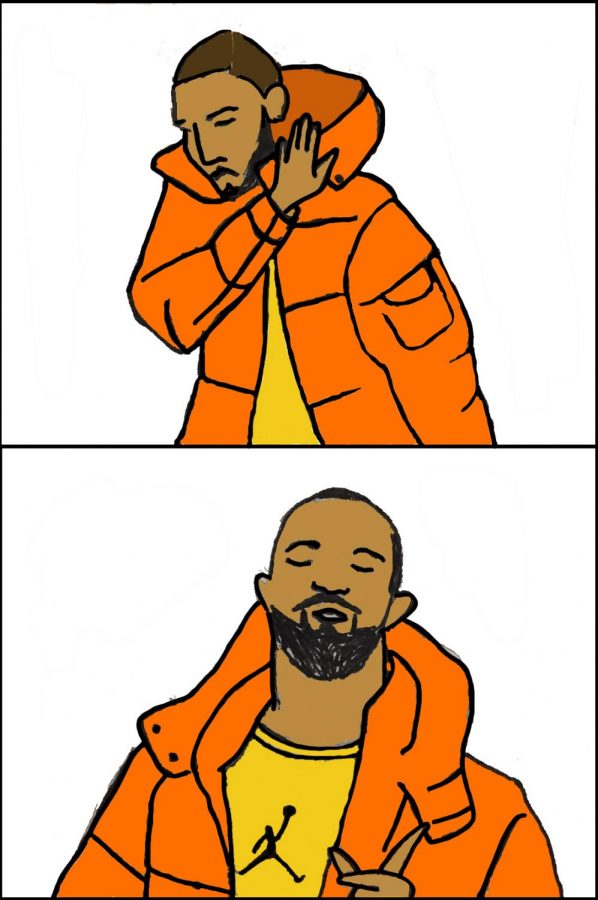 POP CULTURE: Meme formats, such as one of rapper Drake from the music video for his song "Hotline Bling," are popular on meme pages.

From knock-knock jokes with corny punchlines, to late-night, televised comedic sketches, to stand-up comedy, humor is inevitably intertwined with pop culture. One of the latest and most popular forms of comedy among teenagers are memes — online pictures or videos with funny captions.

Helen Roberts* is the creator of meme page “@memeingfulmemes” on Instagram. The account has a cult following of over 250 Grady students who share, like and comment on these memes centered around life at Grady. The page is constructed of memes about classes, high school struggles and school events.

Sophomore Sam Rose followed Robert’s account when he heard about it from a friend at school. He thinks it is entertaining to see parts of Grady culture made into memes online.

“Seeing certain teachers or certain things that are going on around the school made into memes makes them more relatable,” Rose said.

Roberts says the account started with her making memes about school to send to her friends, but it transformed when she decided that she would make a public account of her own that all Grady students could follow.

“[The memes are] about stuff that people are going through, so I guess it’s appealing to see things about it,” Roberts said.

She says memes are a way to bond with peers. Roberts feels like having a meme page that Grady students can relate to creates a community.

Different from Robert’s page, the account is a meme page made specifically for mock trial students. She says the memes are inspired from inside jokes among team members and funny pictures of teammates.

Snyder says that memes are a new platform for communication. They are meant to be shared with others and often create small communities.
“They’re the new generation’s way of making jokes,” Snyder said. “Sure, we still make jokes in person, but memes have become a way of kind of forming a community.”
Snyder says that the mock trial memes help bring fun to the team. When describing the trial process, the mock trial team’s unofficial motto is “hard but fun.” Snyder thinks that the meme account is a way of incorporating fun into the club, which she admits is stressful at times.

She says memes have transformed from “The original O.G ‘memer’ top and bottom text circa 2008/2009 that were being shared on Tumblr and Reddit.” These early 2000s memes used a basic template to make and were shared on platforms that are not as popular with contemporary teenagers. Snyder discusses the “ancient” Bad-Luck Brian memes and the famous frowning cat “Grumpy Cat” memes that have since evolved to more niche memes, with a less obvious sense of humor.

Now, teenagers oftentimes take news events, pictures or videos and turn them into memes, making light of situations that would otherwise blend into the seemingly monotonous days of a high school student.

Snyder  acknowledges that comedians have been using a similar comedic angle, but memes accomplish the same thing in a newer, trendier way that resonates specifically with a younger audience.

“I also think it’s cool how we can connect events happening to pop culture …  and have it be in a trendy meme format,” Snyder said. “I feel like it’s the new comedy — making situations funny that aren’t funny.”

*Name has been changed to protect identity