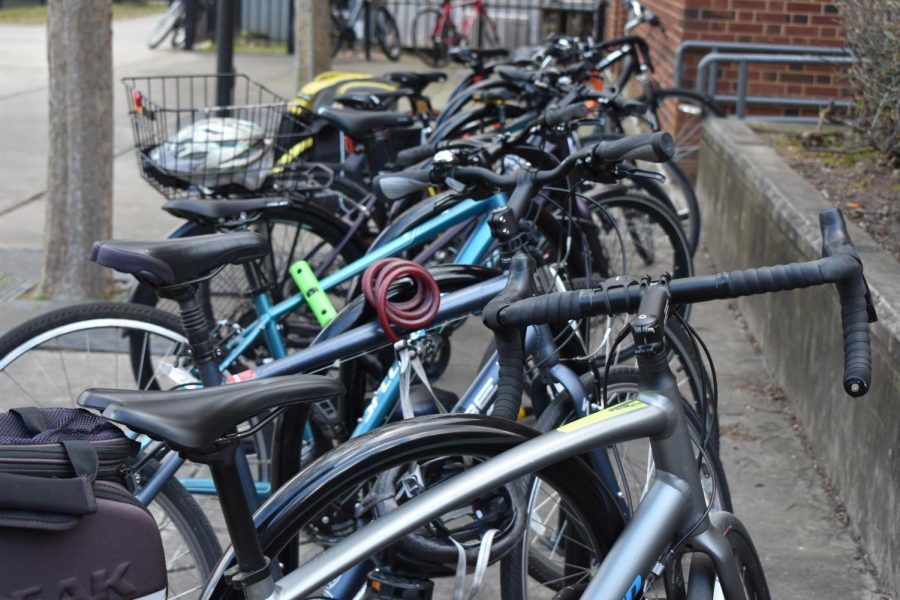 Several bikes crowd the racks near the courtyard.

Junior Charlie Robinson frequently bikes to school. For him, it’s convenient because it means he doesn’t have to rely on the bus or frantically find transportation home after school hours. Biking takes advantage of temperate Atlanta weather and the two-mile Atlanta BeltLine Eastside Trail.

But riding to Grady is not perfect.

For one thing, students, including freshmen Nora Ball and Sullivan Jones, had their bikes stolen. Freshman Brody Weiss’s bike was stripped of all except its frame. Other students have noticed items stolen from bikes, such as lights, seats and other belongings. Security around the bike racks are minimal.

“The worst part is, there’s cameras over there, but they don’t point at the bikes; so, right now, there’s nothing watching it,” said junior Sam Castellano, whose jacket was stolen from his bike while locked near the courtyard. “If anyone decided to take my bike, they could, and no one would catch them.”

Castellano recommends repositioning the nearby camera at the Black Box Theater or buying a new one.

Media specialist Brian Montero lives near Grady and occasionally bikes to school but parks his bike inside his office, something students cannot do. Citing inadequate racks, he prefers not to park it outside.

“I know they’re kind of loose, and I just don’t trust [them],” Montero said.

The bike racks next to the tennis courts, closest to the 10th Street entrance, can be lifted completely out of the ground, meaning someone could free a locked bike. An additional problem is the lack of bike racks, leading many students to lock theirs to school fences instead, a less secure alternative.

However, not all bikers think this is the biggest problem. Robinson claims the most dangerous part of biking to Grady is its location.

Three years ago, freshman Alexia Hyneman died in a car crash while biking across 10th Street and Monroe Drive from a school event. Both streets, which border Grady, are on the city’s high injury network.

“I’ve seen multiple accidents with my own eyes at that exact intersection,” Robinson said.

Bria Brown, who founded the Grady Pedestrian Safety Coalition to improve safety at the intersection, said the area around Grady is convenient for biking because of the BeltLine, which is smoothly paved and connects several neighborhoods. But she is frustrated with the dangers posed by the adjacent streets, which many students cross often.

Montero would like to see more bike lanes in the area. Current lanes exist, such as one on 10th, but only extend to certain parts of Midtown, making it dangerous to reach other areas via streets like Monroe and Ponce de Leon Avenue. Car traffic around the lanes also makes them dangerous. He wants a “renewed sense of the fact that we’re all kind of in this together — bike riders, car riders, pedestrians.”

“That spirit is not really existent now,” Montero said.

However, some improvements have been made in favor of bikers. The Atlanta Bike Coalition worked with the safety council to install bike tuning stations at Grady with tools to pump up tires or fix a flat. Robinson used a similar station located near the location of the old Kroger off the BeltLine near Ponce City Market in the past, and says he’s happy to see more around Atlanta.

“If I go flat, and I’m close to Grady, I know what to do now,” Robinson said.

With the arrival of spring, more students are likely to bike to school, Robinson noted. Brown thinks it’s time to reevaluate Grady’s biking situation to best serve those students on wheels.

“We should definitely invest in more bike racks around Grady,” Brown said. “There is a potential for people [who] want to ride bikes.”