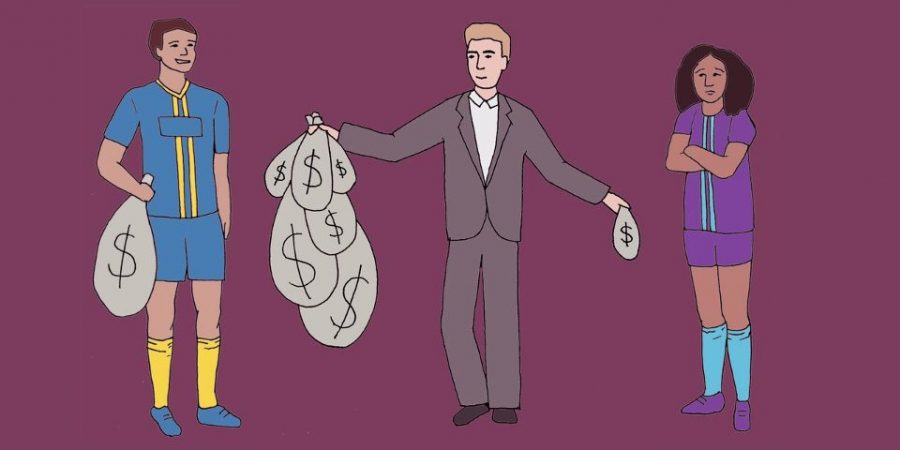 The United States Women's National Team filed a lawsuit with the U.S. Soccer Federation on March 8 for gender discrimination. Despite producing more revenue than the men's team in 2015, a wage gap still persisted.

One of the main constants still found in the world in 2019 is gender discrimination. While much has improved for the rights of women, discrimination still persists.

The United States Women’s National Soccer Team decided enough was enough and took a stand. Arguably the best women’s soccer team of all time, this group of athletes filed a lawsuit against their boss, the U.S. Soccer Federation (USSF) for “institutionalized gender discrimination.”

The timing of this lawsuit only further exemplifies its importance. The team announced the lawsuit on International Women’s Day (Coincidence? I think not) and just three months prior to the Women’s World Cup in France, where the team is hoping to defend its championship title.

The discrimination the team is referring to is not only affecting players’ paychecks but where they play, how often they play, how they train, medical treatment and coaching they receive as well as their travel arrangements.

The men’s team has not advanced past the quarterfinal round of the World Cup since 1930 and continues to draw fewer crowds and audiences than the women, who have previously broken record television audiences in the U.S. In 2011, the women’s world cup final ranked as the second-most viewed daytime program in the history of cable television (at that time), drawing 7.4 United State’s rating and 13.458 million viewers world-wide. Then in 2015, the viewership of the Women’s World Cup Final between the United States and Japan was 16 million at the start of the match and increased to nearly 23 million by the end. It is USSF’s responsibility to decide how the money is split and clearly the federation is not doing a very good job.

The numbers clearly point out the problem regarding pay. A top-notch women’s player would be earning only 38 percent of the compensation of a similar player on the men’s national team.

While important, none of this is new, and gender discrimination against women is continuously seen across sports. The women’s national team T has been thrust forward into a broader fight for equality regarding women in sports. Other teams have reached out to join the team in the fight.

For example, the United States Women’s National Hockey Team recently won the gold medal in the 2018 Pyeongchang Winter Olympics, but nobody is talking about them. The Women’s National Basketball Association (WNBA) players continue to fight for equal negotiations and support from the NBA. The Canadian Women’s National Soccer team has also reached out to the united states women’s national team with regards to winning similar fights in pay equity and equal working conditions.

This lawsuit has been on the surface for years. In 2016, five members of the women’s national team filed a similar gender discrimination complaint against USSF with the Equal Employment Opportunity Commission, a federal agency that administers and enforces civil rights laws against workplace discrimination. The filing referenced that, regardless of the women’s team generating about $20 million more in 2015 than the men’s team, the women were paid nearly a quarter of what the men earn.

The 2016 filing initiated the women’s team’s fight for a new five-year collective bargaining agreement with the USSF in 2017. The negotiations resulted in a raise of 30 percent in base pay plus increased bonuses, travel improvements and control over marketing deals. This is part of the reason why USSF President Carlos Cordeiro said the governing body was “surprised” by the team’s March 8 lawsuit.

I am a proud supporter of the U.S. Women’s National Team and its persistence over the issue of gender discrimination, and I hope that this creates even more strides in the fight for equality for women both in and out of sports. Being a female athlete, it is only right that I fight for what I believe in. Sports cannot be an exemption from the rules of gender equality.