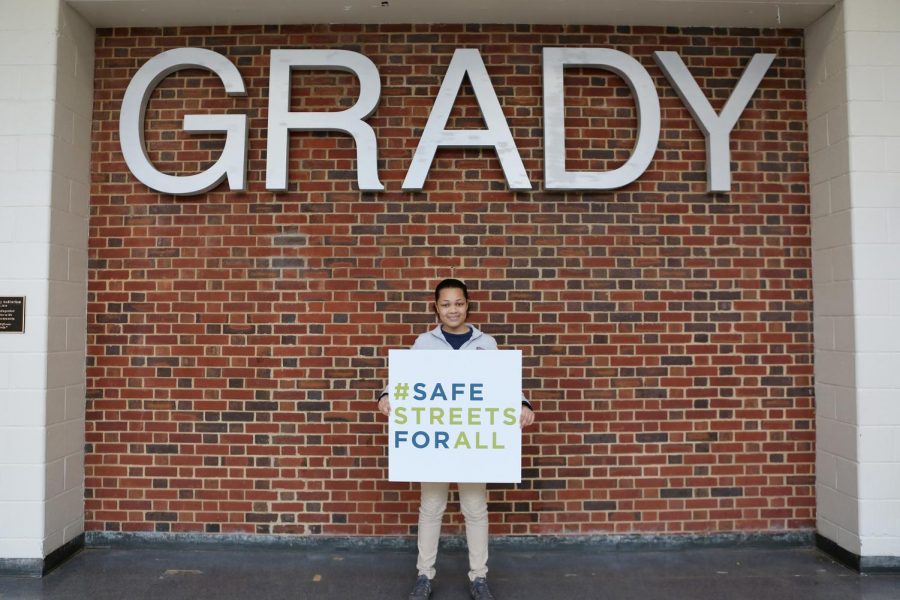 Grady freshman Alexia Hyneman died three years ago after crossing the intersection of 10th Street and Monroe Drive on her bike at night. Three years later, the seeds of safety improvement still struggle to sprout.

“After we lost Alexia, there have been some incremental fixes,” said Bria Brown, founder of the Grady Pedestrian Safety Coalition (GPSC). “But my question to you is ‘does it feel any safer to cross Monroe Drive?’”

A few months ago, Brown started GPSC to encourage the improvement of the intersection. She was writing an article about city plans for the intersection when she was motivated by Ben Foster, policy and campaign manager of the Atlanta Bike Coalition, to get involved.

“If we really care about Grady students and the students within our cluster and across our city, then we have to at least start building safer streets,” Brown said.

Before officially starting the club, Brown brought freshman Nora Ball to a City Hall meeting led by the Transportation Committee. Brown was moved by a man who spoke of his severe accident at 10th Street and Monroe Drive, which nearly took his ability to walk.

“That’s how the first [City Hall] meeting went, and it was certainly shocking,” Brown said.

Soon after, Brown recruited more students, and the coalition grew to include 20 total, with six leading members.

About once a month, during school hours, the group travels to City Hall and speaks at meetings in front of councilmembers. Atlanta City Councilwoman Jennifer Ide, who represents Grady’s district, supports the group.

“As the City makes decisions about how to spend infrastructure dollars, it is very important to hear from young people about what they want their city to look like and what issues are important to them,” Ide said.

The Atlanta Bike Coalition has also advocated for change with its #SafeStreetsForAll campaign and provided the idea for a press conference organized by GPSC on Feb. 12 in the Vincent Murray Auditorium. Brown said Principal Dr. Betsy Bockman was their “biggest ally,” and that they gained a lot from working with Alexia’s father, Thomas Hyneman, who has advocated for change at the intersection since his daughter’s death.

“It is 100 percent the students showing up at City Hall that has caused this stir,” Hyneman said.

Plans to improve the intersection remain somewhat ambiguous, according to Thorpe and Brown.

“What they’re doing is great,” Thorpe said. “It’s just taking a very long time, we’re not getting clear deadlines, timelines, anything like that.”

That’s been frustrating, according to Thorpe, but their work is important, nevertheless.

“I think it gives everyone a sense of fulfillment to actually say that you’re making a change in the community,” Thorpe said.