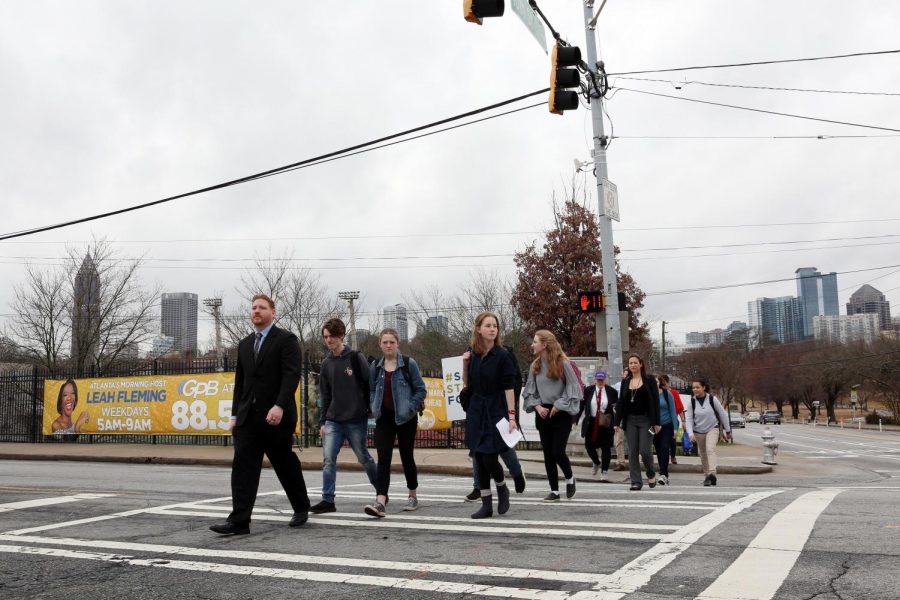 ORIGIN STORY: Thomas Hyneman and Grady Pedestrian Safety Coalition members cross 10th Street to visit a memorial for Hyneman’s daughter, Alexia, who was killed at the intersection in February 2016.

Leaving a chorus concert in February 2016, Principal Dr. Betsy Bockman and her daughter, then freshman Elizabeth, waited for the light at the intersection of 10th Street and Monroe Drive. They spotted a student, a peer of Elizabeth’s, waiting to cross on her bike.

Dr. Bockman, then principal of Inman Middle School, remembers thinking it looked unsafe for the girl, Alexia Hyneman, to cross the “very dangerous intersection” at 9:30 p.m.

“And then I drove home,” Dr. Bockman said.

Two days later, at the same intersection, a car hit Hyneman, who was crossing again on her bike. She died the next day.

“She was one of our own, and she would have been a senior this year,” junior Bria Brown said. “For three years, we have waited for safety improvements at the intersections up and down Monroe Drive.”

Ide, who represents Grady’s district, said improving the intersection is her “absolute number one priority.”

“I   am   the  mother of four girls,” Ide said. “As a family, we have crossed that intersection hundreds of times, so it hits very close to home. As a parent, I cannot imagine losing a child.”

According to Ide, changes have already been made since Alexia’s death, including lengthened cross times, motion sensors which detect crossers and audio announcements to signal when to cross. She said her office will add additional speed signage on Monroe Drive within the next few weeks.

RenewATL, funded by a Transportation Special Purpose Local Option Sales Tax (TSPLOST), is leading plans to improve the intersection. The organization claimed to share the final plans for the 10th st. and Monroe Dr. intersection on March 7. The meeting also served as a platform for citizens to voice their concerns. According to Brown, many supported change for the intersection and also wanted their neighborhood streets to be safer. Ide claimed for 10th and Monroe intersection to be fully funded at that meeting but it is unclear at this moment whether that was done.

However, Hyneman and GPSC have encountered difficulty with the city. Since 2016, operations have moved “Zootopia slow,” according to Brown, when referring to the movement of sloths in the Disney movie.

“The problem is bureaucracy,” Hyneman said. “It boils down to politicians.”

After Alexia’s death, RenewATL drafted plans for rehabilitating the intersection. According to Hyneman, three years later, the design has not changed.

GPSC, which had meetings with RenewATL, was told the city would likely not start construction until 2024.

“It does feel like they’re making things up and that they’re not addressing our immediate needs by finding random ways to say it can’t be done,” Brown said.

GPSC advocates for change sooner rather than later, considering the high fatality rate on 10th Street and Monroe Drive. Both streets are part of the high-injury network. According to Hyneman, 8 percent of Atlanta’s streets, which account for 88 percent of fatalities, are part of the network.

“These dangerous conditions are not isolated to Monroe Drive,” Brown said. “There are 10th and Monroes all around the city.”

According to Ide, Atlanta is considering a city-wide transportation plan which focuses on safety. It recommends adopting Vision Zero, which was started in Sweden more than 20 years ago and has since been adopted by 46 American cities. The non profit Vision Zero Network aims to eliminate traffic fatalities and serious injuries by reconstructing roads and adding more technology to make streets safer.

GPSC and Hyneman are still not convinced the city is dedicated to making a change soon. Brown cited a lack of transparency, and Hyneman has concerns about councilmembers’ commitment. Both aim to keep their politicians accountable and push them to see improvements.

“At the end of the day, we spend our time, and we spend our money on the things that are close to our heart,” Hyneman said. “So what I have to ask of the city council and the Mayor Keisha Lance Bottoms is ‘What is close to your heart?’”