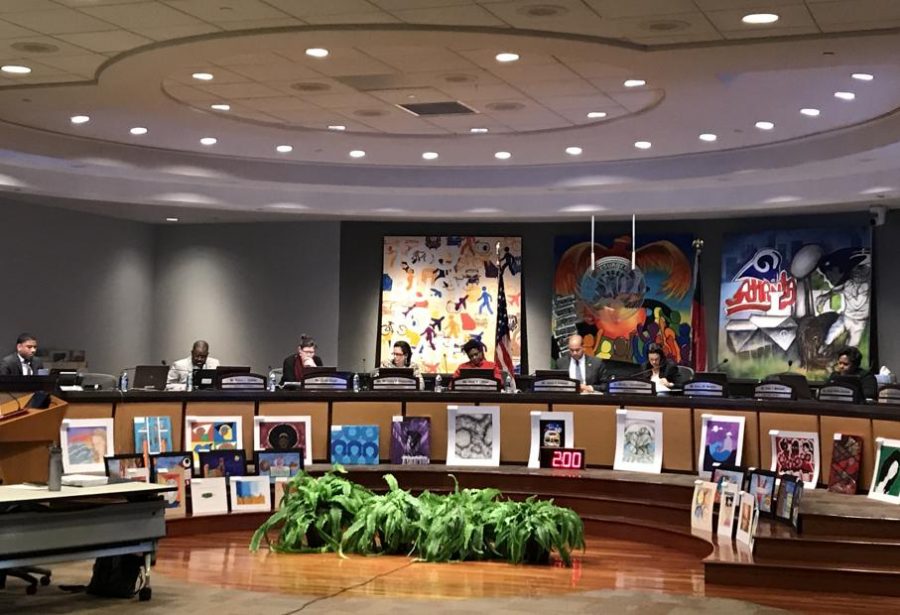 Courtesy of the Atlanta Journal Constitution

The school board voted 5-3 on Mar. 4, giving partial approval of its "Excellent Schools Project" after breaking up the plan's vote into several meeting. Dates for voting on the rest of the plan, which includes a rating system for schools, are undecided

Atlanta Public School’s controversial initiative to implement the “Excellent Schools Project” faces impassioned opposition as well as support from advocacy groups and parents from across the school district.

As the school board continues voting on segments of the plan, which has a goal “of creating a comprehensive strategy to increase the number of quality schools in the District,” the board will have to navigate strong opposition to the plan’s implementation.

“There’s been a lot of misleading information about the framework, and we thought the best way to combat that was by breaking it up,” said Jason Esteves, school board chairman.

The project’s main criticism stems from the plan’s proposed creation of a rating system that would rank schools based on performance and “excellence” as determined by a new budget allocating funding based on statistical analysis.

“We need stability,” said one community member speaking during the public comment section of the meeting. “Why not invest [the rating system’s budget] into Crim [High School], and make it a state-of-the art school. Shouldn’t those children deserve to grow with development instead of being pushed out? We see that too many times in our community.” Crim has operated as an alternative school since closing as a traditional, comprehensive high school a decade and a half ago.

Opponents are concerned over what exactly a “creation of excellence” would entail for lower ranking schools. At the board meeting, many parents and community members expressed confusion about the effects the plan could have on communities

“All parents want good schools for their [children], but however with such an important decision that will have lasting consequences, there are too many unanswered questions,” said another community member. “Too many people do not know how this will impact their communities.”

Despite criticisms, many parents and advocacy groups expressed approval for the plan, including the Latino Association for Parent of Public Schools (LAPPS).

“We want to make sure resources are allocated to minority students and to those in ESOL services,” said one LAPPS member. “I’m here because I want the best for latino students.”

“We support the draft of excellence and equity in school policy,” said one Atlanta Thrives member said during the comment section of meeting. “We represent parents. Parent from Toomer [Elementary School], John Lewis, Thomasville Heights, Kipp Metro, King, Young, Mays, Douglass, Washington, Hollis, Coretta, BEST, Jones, Kendezi, and Carver. Our children are the ones falling through the cracks, the ones directly affected by the impact [of the initiative].”

Still, some are frustrated with a lack of communication with the community from the district concerning its plans for the affected schools.

“I think we should wait and hold this vote until we actually have a conversation,” said another community member. “To sell an idea without answers is not the right thing to do.”

One speaker spoke about the APS cheating scandal that broke in 2014, using it as a platform to point out issues in the system’s attitude toward educational pacing.

“I know that labs were set up to help children who were with the cheating scandal that laid empty,” said Linda Smith, as she addressed the board. “They didn’t do what they are supposed to do, and now you are going to bring a stranger [demographer/statistician] in … Education is a moving target; there’s not a way for you to say ‘A student’s going to be here today, and I’m going to teach this today,’ because it’s always evolving.”

The scandal involved APS employees who altered student scores on standardized tests to avoid “failing school” label. Some community members are concerned that the ranking system outlined by the new initiative could spark another incident of score-seeking policies.

Much of the community is asking for more discussion over the initiative, with concerns stemming over turnaround implementation in the past.

“The excellence model [of the initiative] is great,” said one speaker. “I definitely think we need it, but we fall into this turnaround strategy. What happens to the turnaround strategy? I’ve watched over the last two years, things that were supposed to happen not happen … I’m concerned that we take the essence and talk about community and family engagement, but nothing that shows in practice [is there].”