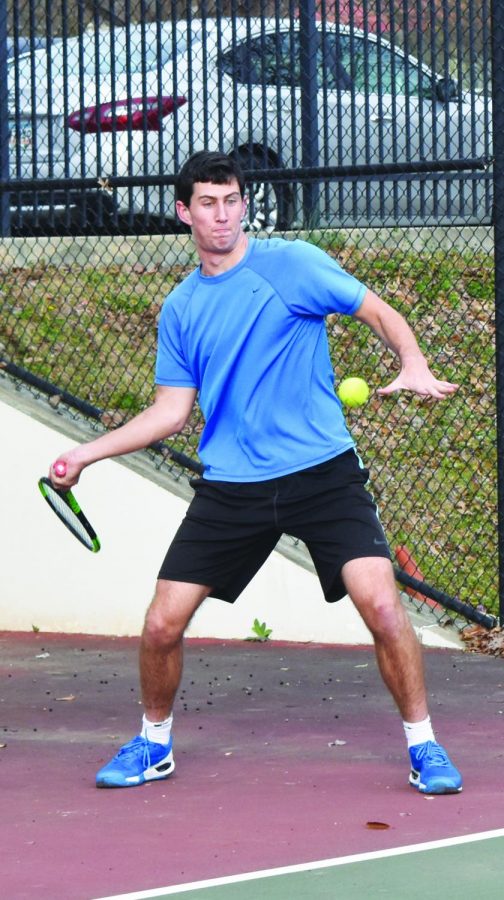 NOT YOUR AVERAGE WOLFE: Senior Josh Wolfe strikes a forehand during tennis practice on Feb. 23. He is signed to attend Lafayette College next fall to play tennis.

As Josh Wolfe entered his final season at Buckhead Baseball in Frankie Allen Park, he couldn’t help but constantly stare at the lit-up public tennis courts adjacent to the baseball stadium. Consequently, the 12-year-old made the full-time commitment to focus solely on tennis.

“When I was looking at those courts, I kept telling my parents ‘It’s like playing under the lights in the U.S. Open,’” Wolfe said. “I originally played baseball, and I was pretty decent and took a lot of lessons, but both my parents and myself knew I should make the full-time switch to tennis. The fact I am the one who takes accountability for my mistakes is something I really like about tennis and has helped me with my life as well.”

Wolfe’s goal was always to play tennis at the highest level, and he wanted to continue to do so in college.

“I love to hang out with my friends sometimes, but it’s been my dream to play tennis at the highest level I can go, so I had to sacrifice a lot of free time with my friends to practice or travel to tennis tournaments,” Wolfe said. “Being able to represent my school playing a sport I love is something really special to me.”

His dream came true Oct. 14 when Wolfe verbally committed to play Division I tennis at Lafayette College in Easton, PA.

“It [Lafayette] will be a great school for him,” Taylor said. “He is going to have to work his tail off. These people are very good players, and he will fit right in. He may even make the starting lineup.”

Lafayette College is a small liberal arts school and a member of the Patriot League, a conference which holds high academic and integrity standards for its student-athletes.

“Lafayette is a really good size for me, and I absolutely love the campus,” Wolfe said. “I wanted a strong liberal arts education, but I also wanted to be able to have the chance to work my way in the daily starting lineup. I love the traditions and campus spirit Lafayette has, and the team has been getting better each year, so I really wanted to be a part of the team and culture.”

Wolfe didn’t play in his first United States Tennis Association (USTA) tournament until age 13, later than most competitive tennis players. Because of his late start, he knew he needed to put in plenty of work to achieve his dream and catch up to his competitors.

“Josh has always been at the top of the skill on the team, but it really started to show in middle school when he started to work really hard at the Universal Tennis Academy at Piedmont Park,” senior teammate and friend Jack Stegelman said. “He has continued to train at UTA in high school, either staying late or getting up early before school to get a workout in. The work started to show off in our high school matches with Josh rarely ever losing a match.”

Josh is currently the 20th best senior tennis player in Georgia, according to tennisrecruiting.net. He helped Grady advance to the Elite 8 of the State 5A tournament his freshman and sophomore years and has a combined 46-6 record at the number 1 singles position throughout his high school tennis career.

“Having a player of Josh’s caliber is a coach’s dream,” said former Grady tennis coach Scott Stephens, who coached Wolfe during his freshman and sophomore seasons. “Besides his obvious athletic ability, Josh set a high example for his fellow team members with his competitive drive and his keen sense of fair play.”

Wolfe attributes the majority of his success and work ethic to his family and longtime private coach Tory Martin. He has been working with Martin for six years and has never thought about switching coaches.

“He is one of the best people I know,” Wolfe said of Martin. “He is not only an incredible tennis coach and helped establish my style of play, but he has helped me so much in life as well. Tory is someone I can always go to and talk to about anything, and I’m definitely going to stay in contact with him when I’m in college. He deserves so much credit for getting me to where I am today.”

Before he was a coach, Martin earned a scholarship to play tennis at Division II Morehouse College where he was captain for three years and graduated in 2011. He wanted to be a coach, guide, and friend to Wolfe through his development as a tennis player. Wolfe is Martin’s first Division 1 athlete.

“My favorite saying to him is ‘the person you are on court is the person you are off court,’” Martin said. “Meaning if you’re not disciplined, confident, focused, or lazy at times on the court, then that means you are the same off the court. Overall though, he is a pretty disciplined kid with a very strong work ethic, that is very caring and selfless. He is a gentle giant that gives everyone the same amount of respect. I knew I had a winner.”