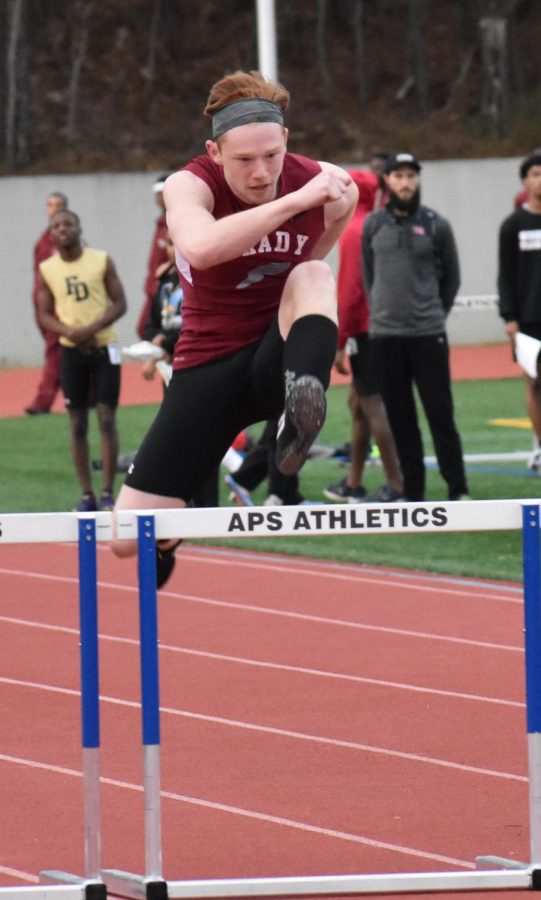 Sophomore Jackson Sexton jumps over a hurdle in the 300m hurdle race in the Grady Opener on Feb. 26. Sexton also runs the 400m dash in 50.2 seconds.

After its fourth consecutive region championship last year, the boys track team has set its goals high for the 2019 season.

“I think we are going to be on the same level [this year] as last year,” sophomore sprinter Jackson Sexton said. “We, as a team, won region [last year] so I think we can get back there.”

Since the region meet is not until April, it is still too early to tell how the team will fare against strong region competition.

“We don’t know what their performances are going to be because you can gauge based on what you think people will have coming back, but you don’t know until you actually start seeing real results and what your results look like in comparison to theirs,” coach Delbert Ellerton said. “The only thing that I can say is that we expect to be competitive. We have been historically competitive, and we don’t expect that to really change.”

Although nothing is set in stone, Region 6AAAAA teams Maynard Jackson, North Springs, Decatur and Banneker are expected to provide the most competition this year.

“North Springs last year looked like they were the team that was going to win it, and we ended up winning region basically because they had some miscues, things didn’t go their way, and we just got really lucky last year,” Ellerton said.

“I kind of have my eyes on Banneker this year,” junior thrower Amari Little said. “They have a pretty good, decent football team, and their football team goes straight to track.”

Similar to swimming, the track season is composed of a region meet that qualifies athletes and teams into the sectional meet and ultimately the state meet.

“The only meet coaches are focusing on is region and anything after that,” Ellerton said. “Everything before is a chess game to have all your pieces in place for that meet.”

While region and state are important, jumps coach and former 1988 Olympian Jose Quiñaliza has an even higher goal for his athletes.

Early on in the season, the team looks to be strongest in distance events.

“I don’t necessarily look at it as strongest events, I mean as far as the running events, right off, it appears anything from the 800 meters up, we will be fairly strong because we have two or three of the kids from cross country, including two of the fastest cross country runners, Bram [Mansbach] and Elias [Podber],” Ellerton said.

“Our distance program looks good this year, and I think we’ll be successful as long as everyone on the team runs what they’re capable of,” Podber said.

Ellerton does not assign captains for the team but expects his athletes to look up to those who put in the work and contribute to the main goal of the team: to be competitive and score points.

“Leadership is coming in all forms this year,” Mansbach said. “With a lack of upperclassmen, we are trying to get newer runners used to the sport and the level of competition. Everyone understands that there’s something to learn from your teammate, no matter what event.”

The team will face a disadvantage this year: the school track is deemed unsafe to run on due to bubbles in the track. This is set to be fixed toward  the end of the season, but it has caused all Grady home meets to be moved to Lakewood Stadium.

“We can’t control the allocation of money to fix the track,” Ellerton said. “A track is still a track. There is only going to be an inconvenience of dealing with the bus schedule and getting over and trying to be there on time to host a meet.”

Hopes remain high despite the problems with the trac,k and it still being early in the season.

“I think that if we all come out and put forth our best foot and just execute and do what we are supposed to do, then we will be successful,” junior hurdler and pole vaulter Elijah Whigham said.