Sons of Pitches Football Club unites players of all ages 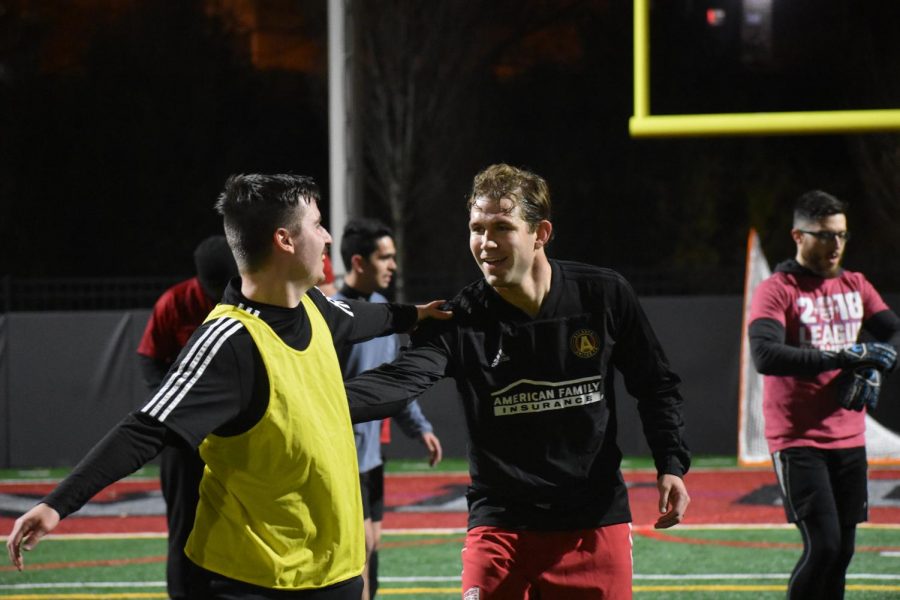 Players from Sons of Pitches' adult league shake hands as they congratulate each other on a game well played.

Soccer players dash across the pitches, sprinting to take possession of the ball, as several games play out across the Walden Athletic Complex. Players of all ages can be spotted passing in every game with smiles and looks of encouragement.  Sons of Pitches Football Club (SOPFC), a soccer organization in Atlanta, is bringing the community together one soccer game at a time.

The club was originally founded by three friends Chris Wedge, Alex Henry and Court Sullivan, who wanted to create a safe gathering place in town for a fun game of soccer. Throughout college, the organizers played on any space available in Atlanta.

“Back in the day, we’d play on basketball courts,” said SOPFC president and co-founder Wedge. “We’d play on baseball fields. We’d play anywhere and everywhere. A lot of times it was really [risky], like my business partner has seen someone murdered. I had a guy tell me if we were still playing soccer on their basketball court they would come back and shoot us. It was a bad seed.”

With this goal in mind, they searched for a safe, reliable space to play soccer and eventually establish a league. In 2014, SOPFC created different adult leagues that split teams into different divisions based on skill level. League participation is available for ages 18 and up,  while pick up games are offered for ages 16 and up. The pick up games offer a way to play for players who can’t commit to a team or want to play with friends of different skill levels. The club offers free family pick up games at Maynard Jackson High school’s field on Sundays as well.

“All that it [free Sunday pick-up] is is adults and kids coming together to play a game of soccer,” Wedge said. “The ages range from as young as 5 out there, and they go all the way up to 15. And that’s great because everyone kind of understands everyone’s at a different level of play. Sometimes, we get so many people we are able to break it up where it’s younger kids playing on one field and older kids playing on another field.”

Wedge emphasizes the club’s inclusivity and welcomes any student from Jackson, Carver, Washington and Grady to play in pick up games for free. Not only does the club bring together kids from Atlanta Public Schools, but invites faculty as well. Nikolai Curtis, Grady’s biology and oceanography teacher and former boys soccer coach, works as a site manager for SOPFC and a referee when needed.

“I actually started playing with them first,” Curtis said. “And then they said they were looking for a manager and knew I would be good working with people because I was head coach at the time [of the Grady boys soccer team]. I then mainly got hired as a site manager, where I set up the fields, manage the games and make sure they’re happening. I also work on the side as a referee with them when needed.”

SOPFC utilizes high school soccer fields across Atlanta includingJackson, Washington, Carver and, most recently, Grady’s new Walden facility. The process of gaining credibility and trust with the athletic directors from each school proved difficult and time-consuming. Negotiating with athletic directors from Atlanta Public Schools took up to 6 months to get access to the fields. With the help of Grady Athletic Director John Lambert and Curtis, Walden became an accessible playing space once SOPFC opened.

“In the very beginning, it took a lot, and we gave a lot to show people that we were committed,” said Wedge. “In the beginning, we had to show that we wanted to be partners, and inevitably the athletic director at Maynard says ‘I trust you guys with access.’ So, when our league grew, we’d reach out to another one. Over time, earning a reputation, people saw we deliver what we promise. We care very much about maintaining a relationship with the school.”

Not only does SOPFC make soccer accessible to high school students, but it also makes it available to adults who want to play recreationally at little expense. Costing between $70 and $75 a season, the adult league allows adults who played in college or in high school to keep touches on the ball with co-workers or friends. Because there are different divisions, the league is open to players of varying skill levels and places them on a corresponding team.

Andrea Morris, who has been playing on a team called ‘Game of Throw-ins’ for more than three years, says she loves the friendships that the league has created.

“Our league, the D1 league, has become a soccer community,” said Morris. “My team communicates who is coming to games through GroupMe, but then also we’ll watch Champions League together or the European Premier League. A lot of us are Liverpool fans, Manchester United fans or Arsenal fans, and we’ll talk about all the different leagues and watch. It’s grown into a mini-soccer family, and we’ll do stuff outside of it just because we all like soccer, and we clearly like each other because we play with each other.

Morris says that many of her teammates have been playing alongside her for years.

“As the years have gone by, some people have moved or moved on for life reasons, and we’ve added more people; so, it’s been one continuous growing and contracting family,” she said. “It’s been really cool.”

Wedge is optimistic for the future of SOPFC. Throughout his life, soccer stood as an anchor, helping him keep a positive outlook on life and his future. Through the organization, Wedge strives to create safe playing spaces for people of all ages across the city, where everyone, regardless of background, has a place where they can succeed.

“I had a very violent upbringing as a kid, and I didn’t excel in school at the beginning,” Wedge said. “The one thing I found, especially, once we started traveling to Ecuador and Costa Rica to visit family, was that soccer was a place where I could win. I was losing everywhere else in life but soccer was a place I could go and play on the same field as everybody else. You play with the same ball and the same rules. I could play with my cousins, and there was no violence involved with it besides a few slide tackles here and there. It was truly a lifesaver for me. It’s a dream to be now doing it for a living.”