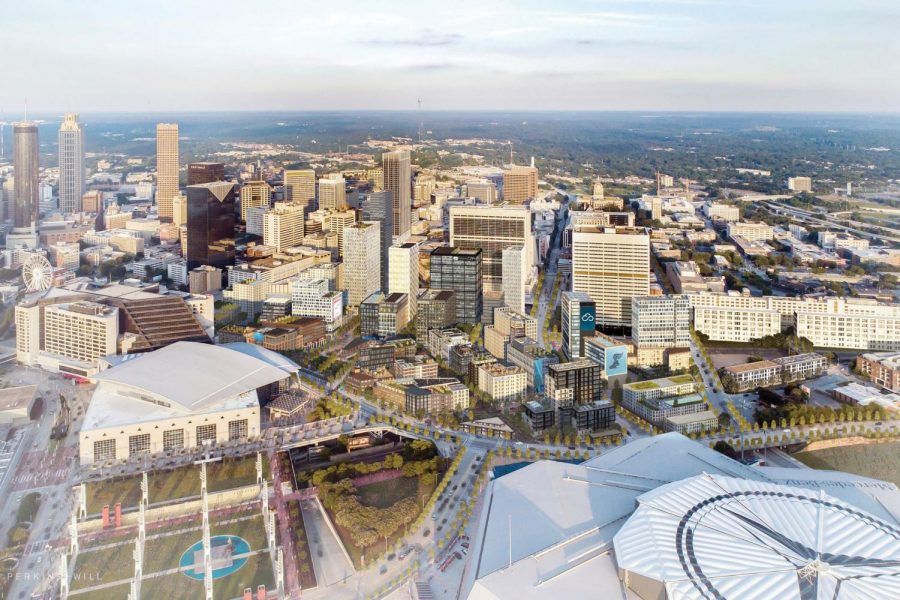 Courtesy of the CIM group

The CIM Group’s proposed development in the Gulch has generated controversy. Some believe that it won’t be worth the loss of taxpayer money that would have gone to schools.

Atlanta Public Schools and the city of Atlanta reached a deal to use more than $300 million in APS school property taxes to fund the Gulch redevelopment. The Gulch, an area in downtown Atlanta, will be developed into a mixed-use complex consisting of office space, residencies, hotel space, and retail space. The development requires a public investment of up to $2 billion.

The agreement “brings the city to the final stages of what truly represents public-private innovation at its finest, revolutionizing economic development in Atlanta for generations to come,” Mayor Keisha Lance Bottoms said in a statement.

According to the deal, APS will wave future property taxes within the Gulch redevelopment through 2038. The Gulch, which is below street level along an old CSX rail line, is located near State Farm Arena, Mercedes Benz Stadium and Centennial Olympic Park.

The city and APS will also continue their partnership in the Westside tax allocation district (TAD) through 2038. This partnership will pay for infrastructure and educational development in the TAD, and the city will reimburse APS $10 million for previously completed projects there.

However, the school system will likely end its involvement in a different redevelopment project, the Eastside TAD, allowing millions of dollars to flow back into APS schools.

“The part that gave me pause was APS no longer participating in the Eastide tax allocation district. But I feel confident that the focus of the remaining funding will be in the highest areas of need. And that that amount of funding will be sufficient to incentivize development in the highest areas of need,” said District 2 City Councilman Amir Farokhi.

According to the pillars of the agreement, APS will agree to participate in four commercial TADs with the City of Atlanta for 30 years. The participation would mean that the TADs, which include the Stadium TAD, Metropolitan Parkway TAD, Campbellton Road TAD, and Hollowell/M.L. King TAD, will receive more financial viability for TAD incentives, which are payments that would stimulate growth in these areas.

“The new terms distribute the impact of the APS increment more evenly over the lives of the TADs,” said Atlanta Board of Education District 3 representative Michelle Olympiadis.

The city also agreed to gradually pay $23 million back to APS through 2023. In exchange for this return, APS would help fund redevelopment in four special taxing districts near the Southside. It’s unclear specifically how much this deal will affect APS financially.

“APS’ focus was on smoothing the impact of TADs, relieving pressure points and windfalls, and creating a more predictable, manageable and sustainable way for APS to support redevelopment within the City,” said Olympiadis.

While the amount of public funding is large, Lance Bottoms has promoted the development as one that would bring economic opportunity to Atlanta.

An earlier version of a deal between APS and the city was criticized by Superintendent Dr.  Meria Carstarphen in October. Dr. Carstarphen asked the Atlanta to either eliminate or renegotiate APS’s participation in the five TADs.

The deal was revised and approved by the City Council in November but drew legal concerns over Gulch bonds from APS in December. This prompted further revision, requiring the school board to consider and consent to school taxes in redevelopment projects on Atlanta’s Westside. Atlanta City Council and the APS School Board both unanimously approved the resolution on Jan. 7.

“I think from an equity side of things, this was the right thing to do,” said Farokhi.

However, the Redlight the Gulch Coalition, a Gulch opposition group, has fought bond validation in court since December. A Gofundme created to pay for expensive legal costs has raised money from 140 Atlanta residents. The next hearing will be in Fulton Superior Court on Feb. 21.

RTGC, a Gulch opposition group, has staunchly opposed the development due to the use of the public taxes for the Gulch rather than for “taking care of school kids, teachers, cops, firefighters, pothole repair, and all the rest.” Julian Bene, a member of RTGC, said that development in the Gulch would ‘cannibalize’ taxable development in the city. The initial developer tax breaks were reduced by $780 million after hundreds of RTGC supporters contacted City Council members and spoke out at City Council meetings in the fall.

With APS’s participation in more TADs and the concession of property taxes, the school system should have a net loss of $520 million over the next 20-30 years, according to RTGC.