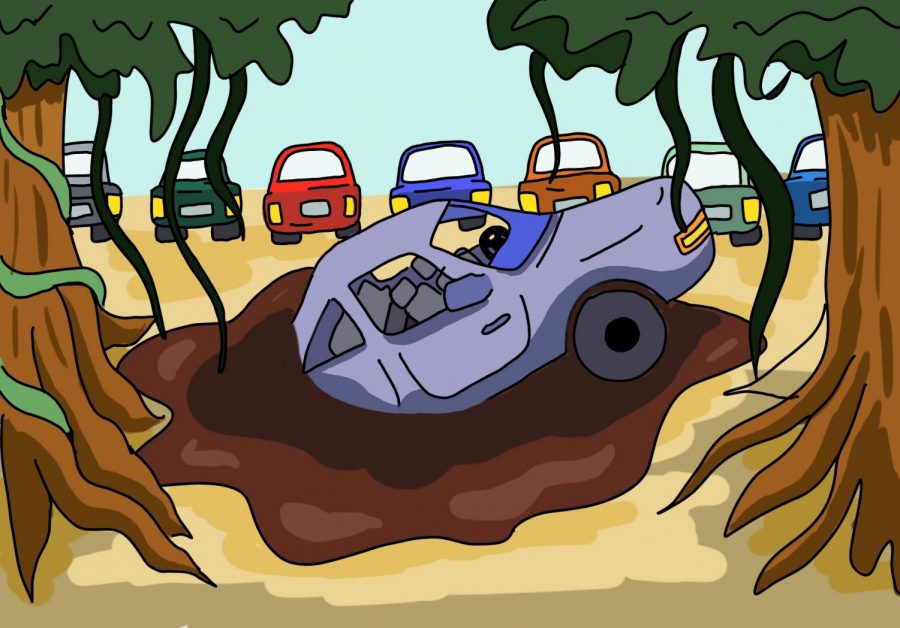 A DUSTY PLAIN: The infamous dirt lot houses student cars as well as the occasional swamp pit and dust bowl.

It is 8 a.m. in Grady’s unpaved student parking area. Drivers begin pulling in to the dusty gates of the dirt lot, awaiting the 8:30 a.m. bell to welcome them to another day at school.

But students have found more than just early-morning music blasting from this dusty plot; some drivers have noticed intense changes in the lot’s landscape, from sinking pits of mud to possums running across the plain.

“The dirt lot has become a sort of natural disaster,” junior Ellen Rader said. “One week, it’s a midwestern drought, the next it’s a swamp jungle of mudslides.”

Some students have used this otherwise unfortunate circumstance into an opportunity for exploration. Senior Rick Murray leads caravans across the rivers of sludge that block the lot’s wire-gated entrance. The waterway is bridged by boards of wood and concrete slabs, but it still takes an expert to navigate safely.

“I’ve seen too many people affected by the dirt lot,” Murray said. “That’s why I became a guide. The climate of the lot is constantly changing; my priority is to get people to their vehicles safely.”

The biome is inhabited by more than just late teenagers and Hondas: a diverse collection of wildlife has come to inhabit this otherwise desolate landscape. Opossums are seen frequently around the mud pits, with the occasional unfortunate marsupial getting sucked down into its bumper-claiming depths.

“Entering the dirt lot is like entering the Outback,” Murray said. “You have to be watching all of your surroundings.”

Murray leads me on an excursion through this new habitat. He explains how the dry, loose soil dug up from the tracks of cars has created the perfect recipe for the region’s frequent mudslides and dust bowls.

“When rain is intense, the risk of slipping into the mud pits is high,” Murray said. “I’ve seen many people lost to the depths of the dirt lot.”

The lot is notorious for its rapid landscape changes. One day, it is a Saharan dust bowl of dry ground kicking up clouds of debris in the paths of moving vehicles; the next day it is an Okefenokee marsh of mud pits and rodent carcasses.

Murray explains that the occurrences in this ecosystem are not always as comical. Frequent driving has led to a steep decline in the abundance of grass and other flora. But the consequences of traffic in this area have done more than just strip plant life. Many students have felt the dangers of the dirt lot physically.

“Last week I slipped into the pit while trying to get into my car,”  junior Lucy Peters said. “The mud was just like quicksand; it sucked me down to my shoulders. I was stuck there for hours.”

Despite landslides and biohazards, many have found the dirt lot amusing. To many social media users, it’s an opportunity to capture the wild occurrences of Grady High School.

“The dirt lot is a sort of community,” Murray said. “From getting to school too late to go into the paved lot, to the tales of bumpers lost in the pits, we all have something in common to share.”