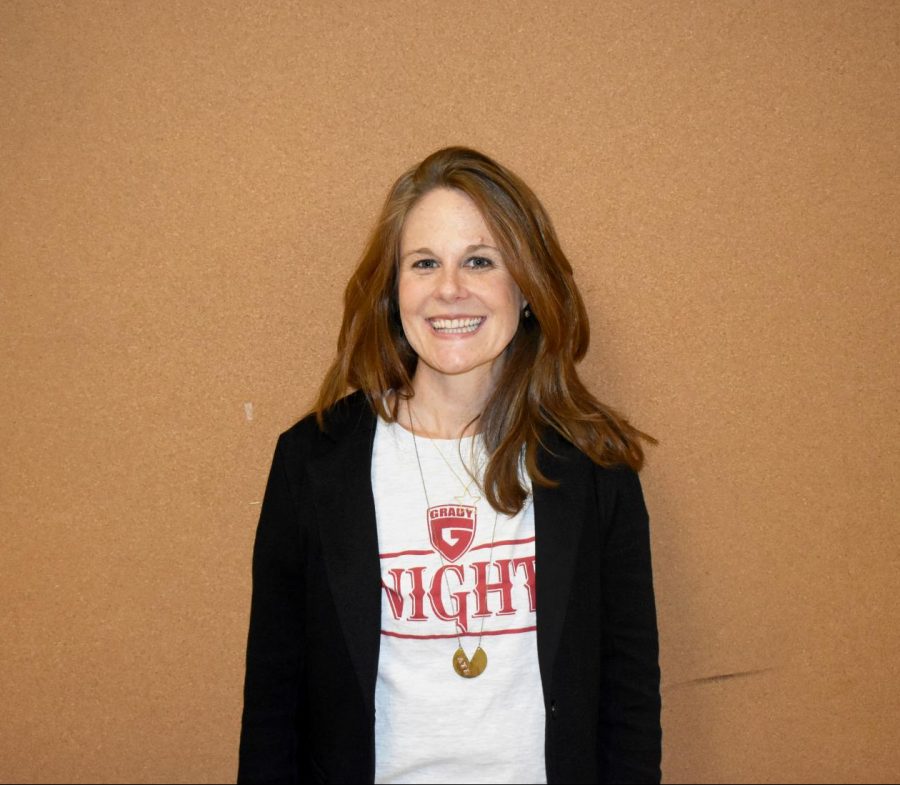 Kate Carter returned to Grady this semester after four and a half years away from teaching.

Kate Carter seems at home walking through the halls of Grady wearing her quirky cowboy boots. She smiles and greets a passing student and stops to talk to her colleagues. You would never guess that she just returned to teaching at the beginning of this semester.

Carter taught at Grady for six years before taking a break from teaching in 2014. During her time away from Grady, she did some incredible things, like work with her husband Jason Carter on his gubernatorial campaign in 2014 and co-found a business, Treehouse Milk. Even though she’s packed a lot of life into the past four and a half years away from teaching, she has returned to the humble halls of Grady because teaching is her passion.

“Through all of this time I missed teaching; I really loved working with teenagers,” Carter said. “I had other jobs, but they weren’t as rewarding as teaching.”

That being said, Carter didn’t always know she wanted to be a teacher. After graduating from Columbia University with a Master’s degree in journalism, Carter returned to the south. Honing her craft, she wrote for newspapers in Georgia, including the Athens Banner-Herald and Atlanta Business Chronicle, of which she was the feature section editor. She didn’t know it then, but her background in journalism would fit right into the Grady culture.

“Grady has so much history,” Carter said. “It’s hard to define what exactly makes Grady so cool. I live in the cluster so I know the reputation it has for everything, including journalism. I’m just glad to be a part of it.”

In 2009, when a job opened up at Grady, Carter jumped on it, eager to use her experience to guide the next generation. She really found her groove as she worked as an advisor to the Southerner. Her friend and business partner Bess Weyandt agrees that teaching suites Carter.

“Kate brings an energy and enthusiasm, and sense of humor, to everything, qualities I’ve seen in many a great teacher,” Weyandt said. “She’s an excellent communicator, and I know she’ll bring out the best writing in her students. Also, she doesn’t miss a beat, so good luck trying to pull a fast one on her.”

In 2014, her personal life became way too hectic when her husband ran for governor to keep up the rigorous schedule of being a teacher. So with many tearful goodbyes, she took a break from her favorite job. She enjoyed helping on her husband’s campaign, but that lifestyle wasn’t for her.

“I don’t love the limelight, so I truly did what I could, but I really concentrated on keeping our lives at home normal for my kids,” Carter said. “Looking back on it, it’s even hard to believe that any of it happened.”

After the campaign ended, Carter was at a crossroads when it came to her career. So was Weyandt, who came up with an interesting idea for a business. Carter decided to team up with Weyandt and take her professional life in yet another different direction. That’s where Treehouse Milk, a nut milk delivery company, was born.

“Kate might be the most reliable person I’ve ever worked with,” Weyandt said. “When she says she’s going to do something she does it, and she does it well.  Where I’m slow to make decisions and overthink things, Kate has a knack for embracing what’s before her. Plus, she’s so wonderfully lovely and charming, which made her great at sales.”

Even though Carter found herself involved in a completely different industry, she always intended to find her way back to teaching. So far she’s been nothing but excited about her return.

“I guess it’s been four and a half years,” Carter said. “But it feels like yesterday. It does not feel like I’ve been gone. It feels like home to me.”