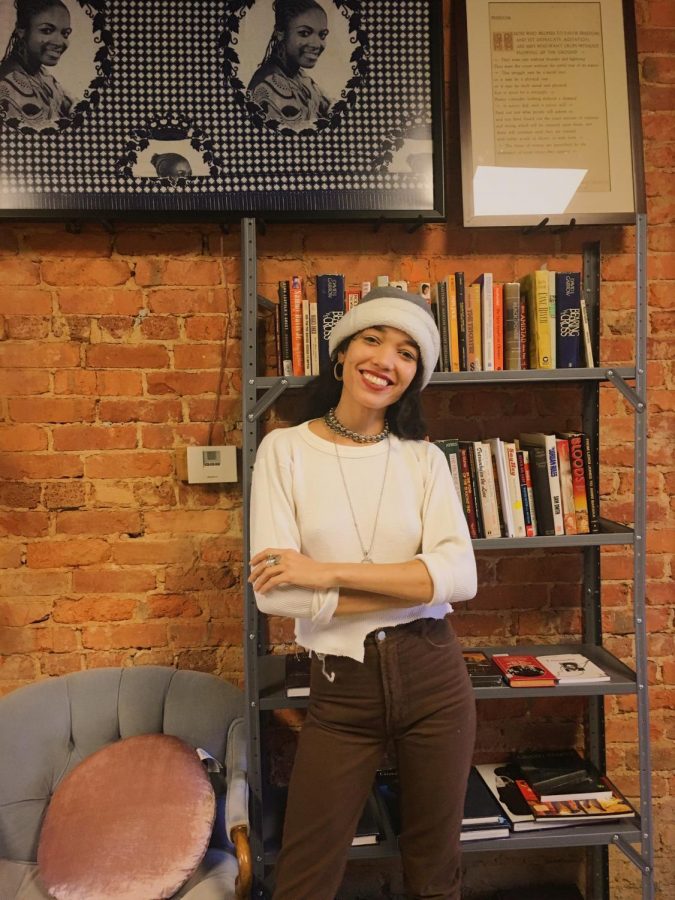 ALL SMILES: Owner of the store Rosa Duffy has been collecting books for the past 10 years.

Not many bookstores have what For Keeps Books on Auburn Avenue has. A small, quaint storefront in the historical heart of the African-American community in Atlanta, For Keeps, sells rare African books.

Owner Rosa Duffy has been collecting books for the past 18 years. What started as a hobby — collecting old ephemera and pamphlets to use for her art projects in college — became a business in November 2018. The road to opening For Keeps was seeded in her projects, as she pursued an art degree at Parsons School of Design in New York.

“It just stemmed from there,” said Duffy, reflecting back to her college days, when she discovered old African literature. “I have a love of reading, and I also have a love for visual art; so, that’s how these two merged together.”

Books in the store seem to float against the walls. Those are ones for sale. In the middle of the shop stands a singular round table that encourages customers to interact with each other or to just take a seat and read. On the round table sit books that aren’t for sale because they are the rarest books in her collection. Usually, these are books that were only printed once or are out of print.

A 7-year-old girl and a 10-year-old boy sit at the round table in the middle of the shop, sifting through the books on the table. Their mother browses through the novels mounted on the wall.

“I want this one,” the little girl said, proudly showing off her newly discovered treasure. Although discouraged that she could not read the title, written in bright blue cursive, she was happy that she was able to find a book with a girl on the cover that looked like her.

But what truly sets For Keeps apart from mainstream bookstores is the unique, specific focus on books the celebrate African-American culture. Duffy’s collection is comprised of books from the African American diaspora or ones that have a lot of information about black lives.

“Not every author is a black author, but it all has to do with our movement or our existence on this planet,” Duffy said.

Duffy feels like For Keeps is able to cater to a large audience because many people don’t know about this type of literature. Customers come into the store curious and leave with a new understanding of a less-frequented genre of literature.

“There are a lot of bookstores, and there are a lot of people who are interested in this kind of stuff,” Duffy said. “But it’s cool to have it all curated in one space where you can go specifically, instead of going to a store where there’s one little section designated for ‘ethnic studies.’ So I wanted there to be a space for people to come, and it would be guaranteed that they could find something about themselves or their history.”

Duffy’s personal history is also woven into the street. Growing up just around the corner from the bookstore, Duffy knows all about the history of Auburn Avenue. From the APEX Museum, to The Royal Peacock, which was pivotal to the music scene in the 1930’s and 40’s and brought famous artists like Ray Charles and Aretha Franklin, she says Auburn is the only street she envisioned her store to be on.
“My whole life since I can remember has been spent on these four blocks, so it has a strong African-American history within the street, but it’s also my history personally; so, it’s been really cool to merge those two things,” Duffy said.
Ife Williams discovered For Keeps in October, when she flew from her hometown in Chicago to Atlanta for the the National Women’s Studies Association conference. Back in Atlanta for another meeting this past January, one of the first things on her checklist was to go to the store before closing time, even if it meant she had to leave her meeting five minutes early.

Williams says she likes that For Keeps  is set up as both a store and a communal space.

“I love that vibe,” Williams said.

She was also surprised to find children’s books for sale at the shop.

“I have a 7-year-old, so I looked through the childrens’ books, and these are totally books that my mom used to read to me when I was little; so, I’m just excited to read them again, ” Williams said, flipping through the pages of Verna Aardema’s “Why Mosquitoes Buzz in People’s Ears: A West African Folk Tale.”

It’s customers like Williams who have inspired Duffy to get into children’s books written by self-published black women.

Duffy says the store has allowed her to develop a lot of cool relationships with her customers, and she’s grateful for each and every one of them.

“It’s supposed to be a community space and also a store, so it’s not just all about making money,” Duffy said. “It’s a lot about people being able to talk to people that they know are on the same page as them. It’s a comfortable space to have conversations with people that you wouldn’t normally have.”