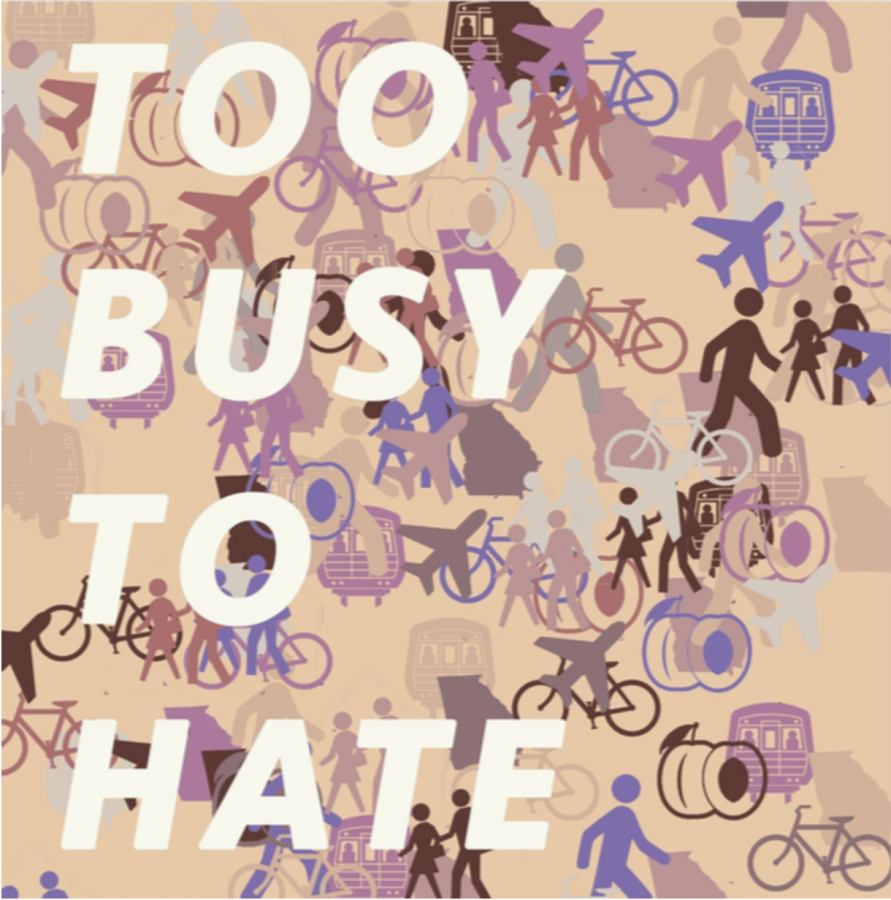 The plan for the mural at the Super Bowl LIVE event features the phrase "Too busy to hate" and various street sign iconography to highlight the importance of Atlanta in transportation. (Photo courtesy of John Brandhorst)

The arts department has been busier than usual this month, as both the Advanced Placement Art class and the Drawing/Painting 2 class were commissioned to paint two separate murals, giving the arts program exposure.

The announcement that Atlanta would host Super Bowl LIII kicked off a flurry of activity for the city. It also initiated something even closer to home, as Advanced Placement Art students designed and painted a mural for the Super Bowl LIVE event on Feb. 1.

A partnership between the Super Bowl and arts organization, Wonderroot, commissioned the art class to paint one side of an 8- foot wide cube over the course of about seven or eight hours at the Super Bowl LIVE event, which is meant to celebrate Atlanta’s culture, in Centennial Park. A team made up of AP Art students Mina Goldsman, Zoe White, Ashley Sasser, Assata Norment, Victoria Hagood, Colleen Miller, and Mackenzie Cotrell participated. Teams from North Atlanta High School and Carver Early College painted two other sides.

“It’s the Super Bowl, and you’ve gotta pay homage to the Super Bowl,” arts department chair John Brandhorst said. “It’s world-wide exposure. We’re a function of a much larger circuit of conversation, and that changes it quite a bit. It’s not just us saying ‘Gee whiz, we wanna play, too.’ They tapped us.”

The AP Art students decided on a design for the mural with the help of Georgia State University student teacher Colm Jenkins, who specializes in mural painting and design. They used spray paint and stencils to make it.

“I think our main goal was just to come up with a nice design that somehow represents Atlanta and looks good on a large surface,” said junior Ashley Sasser, who participated.

The event coordinators also asked that the design incorporates passersby, which is made possible by the spontaneity of the mural’s on-site creation.

“I like to consider it “giving ownership,” because we all share this visual space, and we should all feel like it represents us,” Jenkins said. “If we can incorporate interactiveness we should, so that’s how I wanted to approach it. The people who are visiting Atlanta for that day like it, but the people who have lived in Atlanta over the decades also relate to it.”

The mural presents a major opportunity for students and for the school’s art program due to the publicity surrounding the event.

“I think as a school, we get tons of artistic opportunities, but part of what makes them so important is that they are often public,” Sasser said. “To be viewed by people out of our little educational bubble could mean exposure to what is acceptable and welcomed in a public art world, and validation for students. The Super Bowl is a hugely public opportunity, and I think blurring the lines between school art and regular public art is important in order to transition students into real-world, adult opportunities.”

The Drawing/Painting 2 class also painted a mural on the side of a container on the BeltLine.

The container is one of many “living labs,” as the IoT.ATL website describes them, which are around the BeltLine because of its key role for many of Atlanta’s residents. The containers are part of a project that seeks to inspire improvements in agricultural technology for Atlanta and bring about awareness about the issue of food storage.

Atlanta Public Schools Fine and Performing Arts Coordinator Sarah Womack reached out to arts department chair John Brandhorst and asked if his students could participate. The class painted a container next to Park Tavern.

“I think it’s a very smart thing to give Atlanta,” junior art student Rose Nichols said. “This food production will help keep the city not starving.”

The whole class worked together to discuss concepts for the design, allowing everyone to have an opportunity to lend their voices to the process.

“We have a few designs,” Brandhorst said. “The process boils down to what we’re trying to say. There’s a lot of cells and dendrites and roots turning into circuits, and then there’s the city.”

The combination of cold weather and the difficulty of painting on steel containers presented challenges to the students. However, they pulled through to produce a final product that will stand on the BeltLine for others to see and hopefully appreciate the benefits of innovation.

“These opportunities educate us and allow us to have a bigger part in our communities, which I think is super important,” Nichols said. “This might be a future landmark, and for students to have a part in that is amazing. In the future, kids would have been able to say they made a mark to a positive side of the city.”