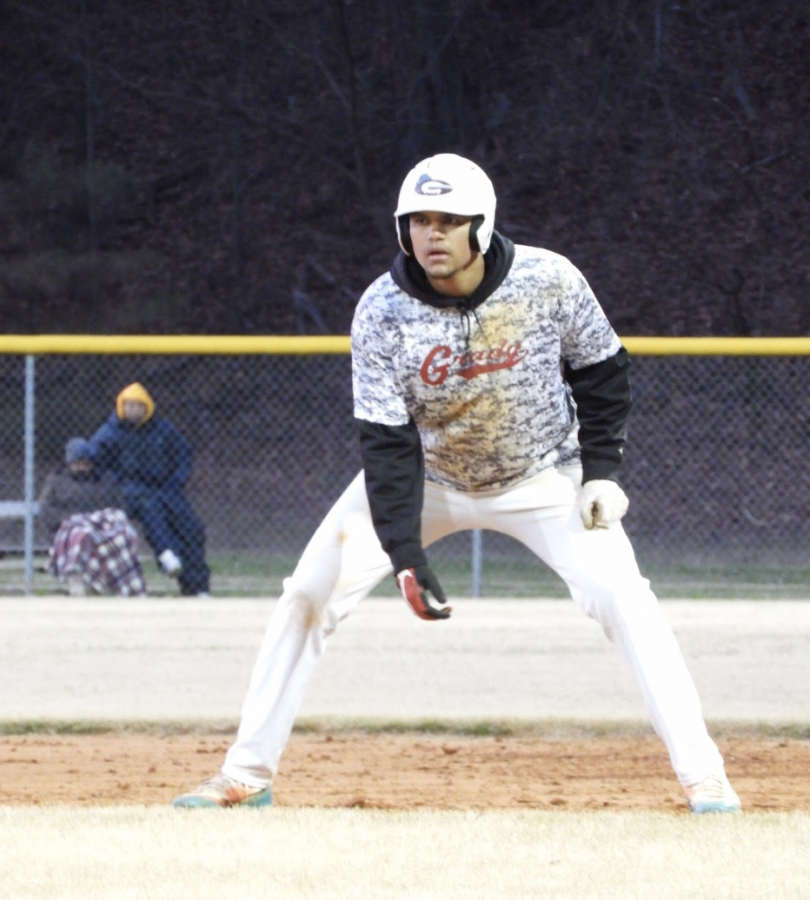 SLIDING INTO BASE: Senior Caleb Maloof committed to Southern University for baseball leads off base preparing to make a steal in a game during the 2018 season.

The baseball team’s season came to an abrupt end last year as the Knights failed to advance to the playoffs. The team ended 11-16 overall but were not so lucky in region play, finishing last in Region 6AAAAA with a 2-12 record.

“Every game we competed in last year, we played hard in and were close,” head coach Darryl Farley said. “I think they [the other teams] just had more talent last year, and this year I think we will be evenly matched.”

The team faces schools such as Decatur, Riverwood, and North Springs in its region. Only the top four region teams advance to the state playoffs.

“The amount of talent that these teams have [makes our region difficult],” Farley said. “Decatur is constantly making the playoffs, and Riverwood and North Springs [as well]. Those three teams are constantly at the top, and there is always a fight for that fourth spot. [This year,] with the additional young players that we have, I feel like we will do pretty well in our region and be in the top half instead of the bottom half like we were last year.”

This year the team gained sophomore Christian Smith, a transfer student from Paideia, who verbally committed to play baseball at Vanderbilt University.

“For Grady, my goals for this season are to make it to the playoffs at least, because I know last year they didn’t, and I think that is the first step to being better a team,” Smith said. “A higher goal for me would be going to state, but we just need to keep it more realistic for right now.”

Vanderbilt is ranked No. 1 in collegiate baseball in the 2019 preseason rankings by the National Collegiate Athletic Association (NCAA).

“[Committing to Vanderbilt] has helped me build my confidence, for sure, because when a big school like that is looking at you, it really makes you think ‘I am doing something right’,” Smith said.

Farley highlights the impact Smith has on the team.

“[Having him] is a tremendous upside,” Farley said. “He is just a great athlete, a great leader, only in the 10th grade. He has a strong bat and a strong arm. We can kind of put him anywhere in the outfield and anywhere in the lineup, and he will do just as well. He will probably be one of the most powerful leaders that we have.”

“I think Christian is a big part of the team,” said senior Ben Lepik, who is committed to play college baseball at Reinhardt University. “He is going to be a leader, even as a tenth grader. He has a lot of experience with all types of baseball situations and scenarios, and he has great game awareness and IQ, and I think he will be a big factor for our team.”

As for other leaders, the team has not named captains, but knows who to look up to.

“We don’t have captains for baseball,” Lepik said. “We have never had captains. We have people on the team that everybody knows as ‘the guy.’”

Farley looks for players who “can run the practice without the coaches being there,” and to him those players are mainly upperclassmen with some exceptions: Lepik, senior Caleb Maloof who committed to Southern University, junior Will McFarland, sophomore Chase Stokes and Smith.

Farley’s main goal is to establish a sense of growth in the players.

Farley and the rest of the coaching staff is big on team bonding and chemistry.

“Chemistry is very important in baseball because when the players are on the field, we are not [out there with them], and so, the players need to be able to communicate and talk amongst each other and figure things out themselves,” Farley said. “[Team bonding is big] because when [the players] are around each other more, they pick up on each other’s tendencies and learn from each other.”

This is Farley’s second year with the team and the players are looking forward to the season.

“[All of our coaches] are all really good,” McFarland said. “They are a lot more strict than our old coaches were, which is good because it keeps us on track and in shape more.”

Farley, a former Tulane University baseball and football player and a Grady alum, tries to establish his practices like a typical collegiate practice.

“I always try to run my practices how practice is run at college,” Farley said. “The things that I tell them and the things that I have prepared are based around college skills, so they will know what to expect when they get to college.”

The coaches and players have high hopes for the season.

“We have a chance every time that we step on the field to win the game, so our chances are high [to make playoffs] if we continue to put in hard work and execute those games,” Farley said.