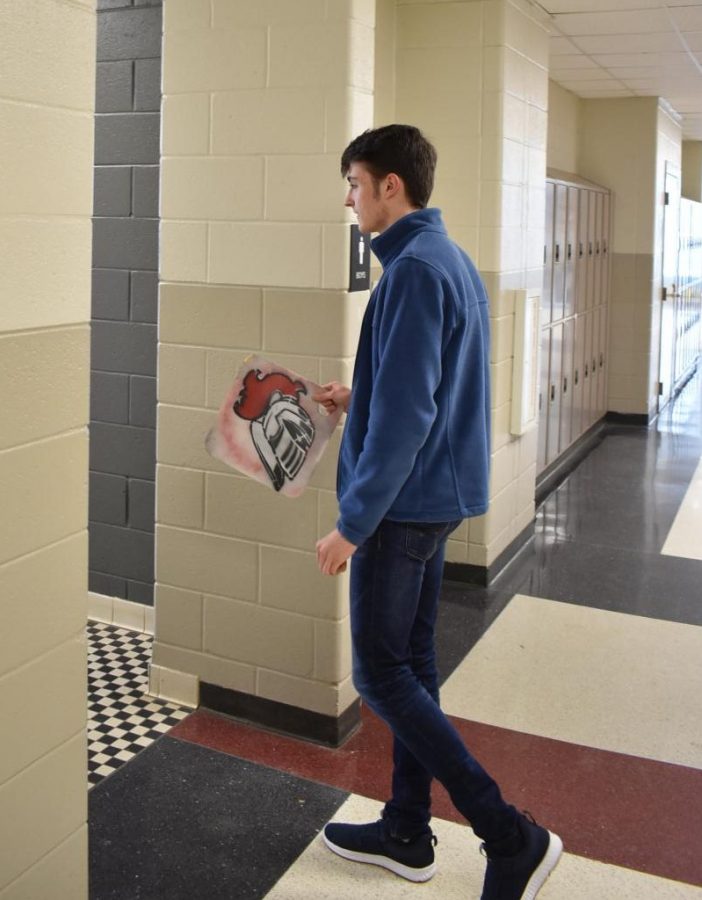 “Anything that goes into a restroom is super dirty, no matter what. I'm completely grossed out about it,” said junior Isaac Turner, shown here carrying the pass into the restroom.

When junior Isaac Turner leaves class to go to the restroom, he remembers to take the bathroom pass, but instead of picking it up with his hands, he awkwardly grapples with his underarm, struggling to keep it from hitting the floor.

“I don’t even touch it with my hands at all,” Turner said. “Anything that goes into a restroom is super dirty, no matter what. I’m completely grossed out about it.”

AP Art students painted most of the rectangular wooden veneer passes. With years of use, many are now worn, with some corners chipped off and their once bright maroon, gray and white paint faded.

Some students avoid using the passes altogether. Sophomore Lindsey Curtis said she feels like teachers do not care enough about the bathroom pass rule to justify her taking it. Junior Clarice Hill agrees.

“I avoid using the bathroom passes,” Hill said. “I don’t necessarily trust the entire public at this school to have good hygiene. I would prefer to wait until after class and use my transition period to use the bathroom.”

Teachers seem to understand students’ reluctance toward taking the passes.

“I don’t touch the bathroom passes because I feel that a lot of the students have poor hand-washing habits, and I do not want those germs from the past to transfer,” World Literature teacher Brooke Ramey said.

It is unclear if the passes are ever cleaned or sanitized.

“I don’t think I have ever seen [anyone cleaning the bathroom passes],” Nikolai Curtis said. “I don’t think we need to live in an aseptic environment, but I don’t think it would be a bad thing to clean it every once in a while.”

Healthcare teacher Leola McNeill recommended the use of hand sanitizer as a solution.

“To me, when you take the pass into the bathroom, and you wash your hands, you are fine to come back in, and you should just use the hand sanitizer, and you should be okay,” McNeill said. “A lot of times, people just don’t do those pieces or for not long enough.”

Some students suggested installing hooks outside of stalls in the bathrooms to hold the passes. Others suggested replacing the wooden passes with disposable paper ones.

“I just think it would be reassuring to know that someone actually wiped down and cleaned the bathroom passes,” junior Vidhya Osinuga said. “That might be the easiest thing to do.”