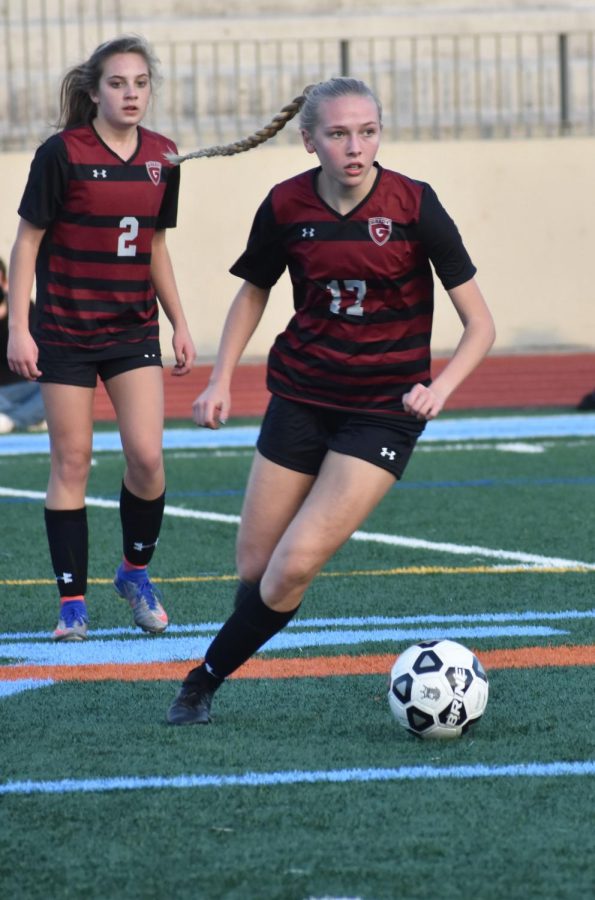 Senior and captain Lena Brown takes her space in the center of the field against North Atlanta. The girls team plays next on Friday, Feb. 8 against Columbus.

The girls soccer team experienced many changes since the end of last season. There’s a new head coach as well as a JV team for the first time in three years.

However, with change comes difficulty and necessary adaptation, which does not always come easy in soccer.

New head coach Hemal Patel brings energy and experience that could lead the Lady Knights to success and improvement in the 2019 season. Patel coached at Tri-Cities High School in Fulton County before moving to North Atlanta, and is currently a club coach at Inter Atlanta FC. He has set high goals for his first year at Grady.

“I never have low expectations,” Patel said. “The goal is to win state; that’s always the goal. Doesn’t matter if we have a weak team or a strong team.”

Although tryouts were Jan. 15-17, Patel said he has been watching this group of girls since November in preparation for the season. Because it’s his first year at Grady, he relies on the experience of the players to help him get the lay of the land.

“I’m first year;they’ve been here way longer than I have,” Patel said. “They’ve played in the program. They know what it’s about; they know the opponents; they know each other. I value that a lot.”

The value of experience can be second to none as the team attempts to go far in the State Championship tournament, and senior leadership will be crucial.

“We definitely have a lot of experience from playing, this is my third year,” senior Mia Wood said. “We know how high school can be different from club, so we have more experience to give [younger players] advice.”

Wood played for a Developmental Academy (DA) team at Concorde Fire last year, making her unavailable to play for Grady. With her return, the girls will look to draw on defensive leadership.

Not only does the girls’ team possess experience, but it also has plenty of youth. There were 16 freshmen at tryouts, and although the majority made the JV team, their qualities are not overlooked by the coaching staff.

“I think in any team, you need players that are experienced if you’re going to be successful,” Patel said. “Where the difference lies is the young ones. The young ones, depending on how good they are, can make a massive impact.”

With one freshmen, three seniors and plenty of juniors and sophomores in between, there is a strong combination of ages on the varsity team.

“I think we have a really good balance this year,” Patel said. “These are all things that are promising, and the fact that we have these seniors and juniors provides for a great blend and a challenging environment.”

The girls varsity team has a distinct advantage because they didn’t graduate any seniors last year, meaning they have all of the same impactful players of the 2018 season. However, senior leadership will be key this year, with many of the returning upperclassmen.

“If the older players stay focused and keep up the intensity, then it will increase the productivity of the practices,” senior and four-year player Lena Brown said.

Wood aims to make it to the Final Four in the State Championship tournament this year, and plans to lead the team toward that goal.

“I think we can definitely get there with just more practice and learning how to connect [as a team] the best we can,” Wood said.

A cohesive team could mean the difference between winning and losing, and the Lady Knights started building their connection on Jan. 22, the first day of practice.

“The team is always better if, like [coach] Ham was saying, you know the next player’s move, like you know them so well so you know where to put the ball and how to connect,” Brown said.

The introduction of the girls JV team will allow younger players to develop further and ease their transition from middle to high school soccer. It also leads to JV players challenging each other for a spot on varsity, which is something Patel wants.

Girls JV coach Sophia Zeis brings knowledge and a high-level mindset to the team because of her own days of playing for the Georgia Olympic Development Program (ODP) in high school and her plans to play Division 1 at Syracuse before a career ending injury. She has also held coaching positions at club teams Concorde Fire and Gwinnett Soccer Academy (GSA). Zeis encourages the development of her players to bring them to the next level.

“It’s definitely been a passion of mine to change the culture and environment of our training systems here and kind of bring in a European style and bring a more professional training atmosphere for these girls,” Zeis said. “My goal is to get them to carry their desires to play at the next level.”

Zeis expects quality from her JV players “on and off the pitch,” but thinks it is too early to project how the team’s season will go.

Overall, the new head coach, senior leadership and JV team all look to contribute to the 2019 season. In the varsity scrimmage on Feb. 1 against Westminster, the girls lost 3-0 at home. The team also lost to North Atlanta 2-1 in its first game on Feb. 4 after two halves of overtime.

“For me, it’s about development and being part of a team,” Patel told his team after the final night of tryouts. “All of you look good. I’m really, really excited.”