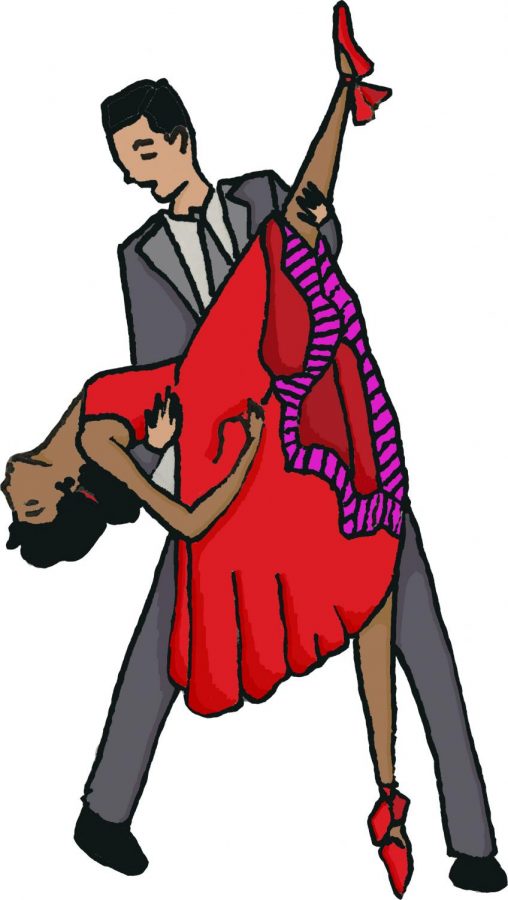 Tony and Maria, the main characters and protagonists in West Side Story, dance together.

“West Side Story” has made a huge impact on the world of musical theater since it first debuted in 1957. The drama department decided to take on this classic for the second time in its history.

This narrative delving into the lives of two young lovers kept apart by gang tension is taking on a new spin, with a reproduction directed by Advanced Placement U.S. History and musical theater teacher Lee Pope.

“It is my favorite show ever,” Pope said. “I have done it four times. The first time I did it was in my first year of college; I played Riff, then I’ve done Tony in a concert version in New York, and then I did a summer stock as Tony, and then I worked with Ms. [Lisa] Willoughby when she directed it when I first came here.”

He hopes to funnel his passion for the story into the drama department’s production, which will run March 21-24 in the Murray Theater.

“It is very near and dear to my heart,” Pope said. “I know the script inside and out, and I still cry every time I see it.”

In order to inspire the student body to try out for this show, art and technical theater teacher John Brandhorst coordinated a field trip for students in the arts department to see “West Side Story” performed at the Cobb Energy Center. That version of the show was an opera. Many students who performed in the fall musical, “A Chorus Line,” were invited to come.

“Seeing the actors on stage, dancing, singing and living in that world made me very excited to try out for the Grady production,” said Isabel Pruitt, one of the female leads in “A Chorus Line.” “It also made me realize the difficulty of the principal roles in the play.”

“West Side Story” is a tragic tale of love based on Romeo and Juliet featuring two leads.The female lead, Maria, a vibrant young lady who wishes for a better life, is a highly-coveted position and Pruitt is among those trying out for the part.

“I want to play Maria,” Pruitt said. “I have been listening to this musical for a lot of my life, and I’ve seen the movie a thousand times … I am taking voice lessons and working on the singing a lot. Now, I am starting to dive into acting and especially the accent of Maria.”

Besides just attracting some of Grady’s more seasoned performers, many less experienced students have been intrigued as well. Freshman Dylan Abernathy attended the field trip as well and has been compelled to try out.

“I was already super excited to do “West Side Story,” but [the opera performance] just gave me so many ideas for character choices to use in the audition process, and just overall inspired me,” Abernathy said.

Both students are excited about the chance to work with Pope on the renowned performance.

“He has a more personal approach and really likes to work one-on-one with his students,” Pruitt said.

Coming in with an outside perspective as a freshman, Abernathy has high regard for the Grady theater program.

“[The theater program] is definitely the best theater program I have worked with yet,” Abernathy said. “Everyone is so talented and excited about what they’re doing, which makes every production that much better.”

Pope has great anticipations for this show, and fully believes that the Grady theater students are capable of pulling it off.