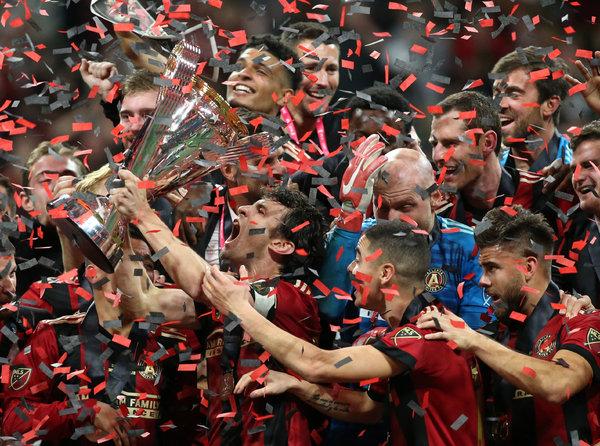 Atlanta United celebrate as champions of the MLS Cup. The five stripes won in the final game against Portland 2-0.

After a 23-year drought, the city of Atlanta can finally celebrate a national championship win as Atlanta United beat the Portland Timbers 2-0 on Dec. 8.

“It was really energizing, even though I wasn’t at my normal seats, it was a different view, and it was great to be at the final,” senior Lena Brown said, who plays on Grady’s girls soccer team and regularly attends United games at Mercedes Benz Stadium.

The bar was low  for Atlanta United when it was announced that soccer was coming to the Peach State in 2014, but the 5 stripes, United’s nickname, showed up in its inaugural season.

Martino lured South Americans to the club and brought in MLS veterans to mold United into what would become an MLS powerhouse, playing an entertaining, goal heavy style of soccer.

In its first season, Atlanta finished fourth in the Eastern Conference with 55 points, and headed into the playoffs in its first season becoming only the fourth team in MLS history to do so.

Paraguayan midfielder Miguel Almiron emerged as the team’s star finishing with 12  goals and 11 assists. Venezuelan Josef Martinez scored 19 goals in the 2017 season, even though he was injured for a large part of it.

Although Atlanta was eliminated by Columbus Crew in the first round, United set high expectations for 2018-19 season. Atlanta broke the MLS single game attendance record in 2017, a record which would be broken again in 2018, and moved from Bobby Dodd Stadium to the newly-constructed Mercedes Benz Stadium.

In the opening game of the 2018-19 season, Atlanta lost 4-0 to the Houston Dynamo, but the 5 stripes never looked back from there. United finished the season second in the Eastern Conference with 69 points, just 2 points behind the New York Red Bulls.

The stage was set for a clash between United and the Portland Timbers who upset the Number 1 seed, Sporting Kansas City, in the Western Conference.

Atlanta came into the game as a major favorite and showed why. Martinez added to his already incredible goal tally scoring his 35th of the season in the 39th minute putting, United up 1-0.

Late in the first half, it seemed like Portland would tie the game, but goalkeeper Brad Guzan was able to keep Atlanta in the game, making a huge save from a Portland header.

Early in the second half , United scored another goal, which would seal the championship for the five stripes. Franco Escobar, who had scored in the conference championship, finished off an assist from Martinez, putting United up 2-0.

“When the goals were scored, the stadium was louder than it’s ever been before, and after, with the awards ceremony, everyone was so excited,” said junior John Centner.

By the 80th minute, it seemed like the game was out of reach as United subbed off its two superstars, Almiron and Martinez, and fans began to celebrate.

For Atlanta United fans and Atlanta as a whole, the championship ends what some may call a curse, and others, a drought. In only its second season Atlanta United has done what the other sports teams of Atlanta have only done once, when the 1995 Braves won the world series.

“After only two seasons, winning the MLS Cup is amazing for the city,” said Centner.