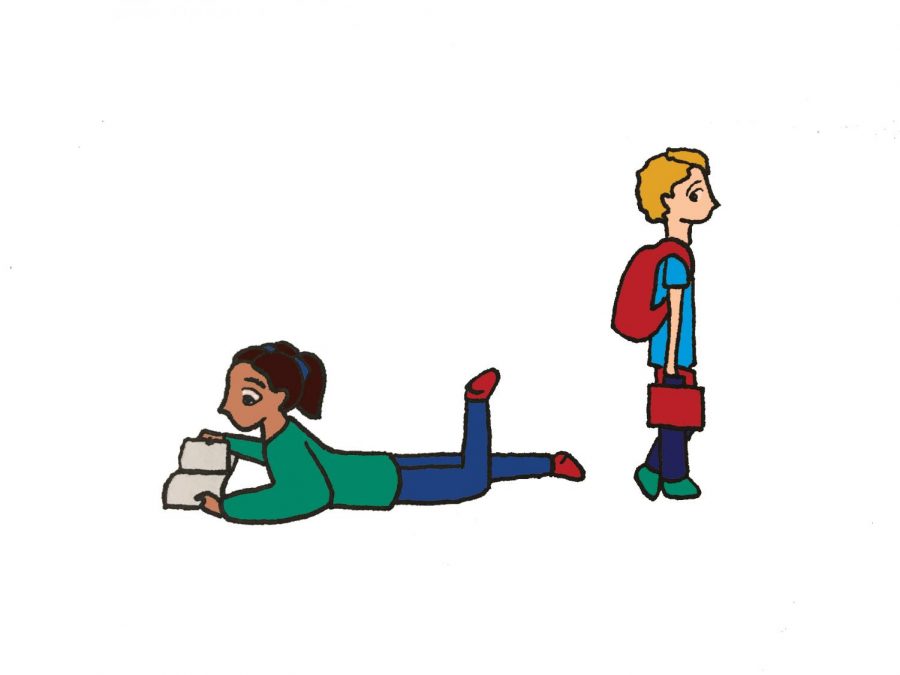 Many students experienced nontraditional schooling methods before coming to Grady.

While many students share the same elementary and middle school experience, coming from feeder schools such as Morningside and Mary Lin elementary schools, Centennial Academy Charter School and Inman Middle School, this is not the case for all.

Junior Royce Mann was unschooled, an education method that rejects conventional schooling and advocates learner-chosen activities as a primary means for learning, until he was nine or 10 years old. He then went to several homeschool co-ops before attending school for the first time at The Paideia School.

“The philosophy behind [unschooling] is that kids, if exposed to diverse aspects of life and society, will learn naturally and will pick up the skills that they need by following the interests they develop,” said Mann, in his first year at Grady and a member of the Southerner’s staff.   said.

For some, the concept of unschooling is difficult to understand. According to Bridget Bentz Sizer, a writer for PBS Parents, “Inspired by the teachings of John Holt (1923–1985), unschooling is a branch of homeschooling that promotes non-structured, child-led learning.”

Although unschooling is technically a type of homeschool, Mann does not believe the definition of homeschool accurately describes his early education experience.

“Homeschooling doesn’t fit it very well because what [my parents] tried to do and what I think they did pretty well was making sure that myself and my brother were out of the house a lot,” Mann said.

Some of these outings included going to museums, plays and traveling, since Mann’s family was not restricted by the standard school calendar.

Mann remembers the transition into a traditional school as easier than expected, at least at first.

“I don’t think it was too hard because I wasn’t really in a set pattern,” Mann said. “I wasn’t really used to one thing because unschooling could really be whatever me or my parents wanted to make of it, and I was used to things changing. It was sort of like another change in that way.”

However, Mann began to notice challenges after a while, particularly since it was the first time he had more than five hours of school a week.

“I think the hardest thing about it was having to adjust to that sustained schedule,” Mann said. “I think it was midway through my first year where I was like ‘oh my gosh I’ve been doing the same thing everyday for three months.’”

Junior Kiera McManus, like Mann, did not attend a traditional school before coming to Grady.

McManus attended an Arbor Montessori School from when she was three until eighth grade, before coming to Grady. The Montessori method of education, which Dr. Maria Montessori developed in the early 20th century, is a “child-centered educational approach based on scientific observations of children from birth to adulthood,” according to the American Montessori Society.

For McManus, the most notable change coming to a traditional high school was the much larger size.

“In middle school, there were 18 people in our grade,” McManus said. “It’s just a lot bigger of an environment.”

The Montessori method does not give students grades until middle school, which may seem like it would make for a difficult transition into the Grady school system. However, according to registrar Chinaester Holland, this is not necessarily the case.

Holland said that no matter the school a student is coming from, they will have some kind of grades or academic record that Grady can use to place the student in classes. The process is specific to the student and their families and is confidential.

McManus felt that her transition to Grady was, for the most part, smooth.

“It was easier than I expected, but it was understandably hard, I think,” McManus said.

McManus believes that coming from a nontraditional school has helped her in certain ways, but in general she doesn’t find it very noticable.

“It has helped in really random small stuff,” McManus said. “Like certain aspects of writing or reading that we learned at Arbor in a way that’s different than they may be learned at Inman.”

For Mann, he believes unschooling has given him a unique outlook on life. He said he doesn’t view school as being as much of a necessity as his peers do.