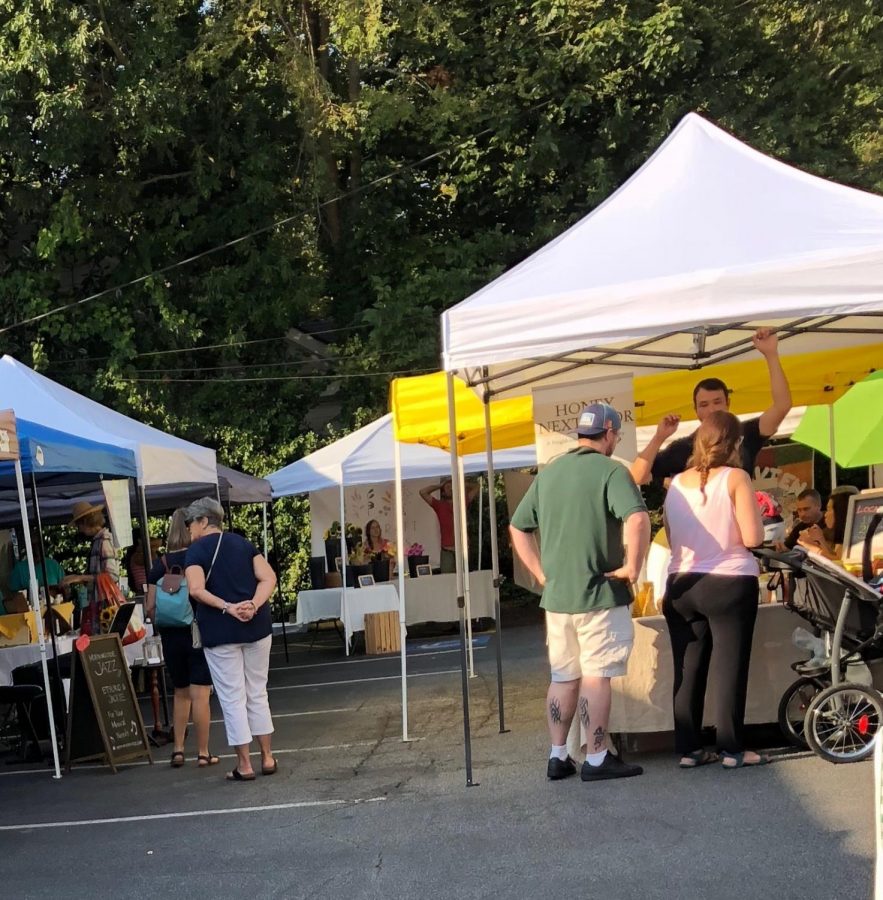 Shoppers browse for organic foods on an early fall morning during the weekly Morningside Farmers Market. The market opens every Saturday at 8 a.m.

At 8:00 a.m., when most of the neighborhood is still waking up, the Morningside Farmers Market is wide awake, the welcoming melody of Etsuko Tomeda’s piano floating through the air. Unlike most of Highland Avenue, empty with the exception of a few joggers and strollers, this short block across the street from Alon’s Bakery is alive and busy.

The Morningside Farmers Market attracts customers from all across Atlanta, as it is the only certified organic market in the city.

Wriston Jones, a regular customer since the market first opened in 1995, buys all of her food here. She also follows a strictly organic diet. The farmers market provides Jones with space where she can easily find food she feels comfortable putting in her body, without having to worry about pesticides or other chemicals.

“You can’t control what you breathe so you better start controlling what you’re eating because if you don’t you’re just gonna compound the toxins in your body and you’re gonna get sick,” Jones says.

Jones’s organic lifestyle, like many others, is made easier by this neighborhood farmers market and its interesting selection of local vendors. One of those vendors is a beekeeper named Brandon Tai. Tai created the company Honey Next Door, which is the only commercial beekeeping operation in the city. He uses farmers markets, like Morningside’s, as his sole means of distribution.

“I was in the energy business for a while, and then I was in the wine business, and I am only doing honey now,” Tai says. “If you want this kind of quality produce, it only works when you’re buying it locally and especially with honey, with its allergies and stuff, you want it the most local you can get.”

Tai feels that farmers markets, like Morningside’s, provide people like him and other small farmers a wonderful platform to spear awareness about their products. It also benefits the community by offering local, fresh produce free of the chemicals found in most inorganic food offered in larger grocery stores like Publix and Kroger.

“People here understand the difference between why you’re not buying something at Kroger or Target and versus getting something more wholesome,” Tai says. “You have to support the local people.”

Another vendor that recognizes the obvious differences buying from the Morningside Farmers Market versus the common grocery store is Christina (no last name given) from Cafe Campesino. Cafe Campesino is a coffee shop and vendor that sells coffee beans cultivated on small farms in South America.The shop was created with the goal of fair pay and getting money directly to hard working coffee farmers.

“Early to rise, picking the vegetables fresh, using your hands, you know using your two hands, it’s not like a large corporation that does things by machines, it’s all that person’s hard work and back breaking work,” Christina says .

Christina feels that all of these aspects that people can easily relate to, such as hard work done by hand, is lost when shopping at a grocery store, where there is no direct interaction with the person who made the food.

Vendors personally interacting with their customers adds to the warm sense of community. The Morningside Farmers Market itself is one small community where people gather every Saturday morning to meet new neighbors and eat good food. There is always a constant flow of families,and the vendors all call each other by their first name.

“People who come here are really chill, I mean, they’re listening to jazz,” says Parnas, the chef and owner of Talat Market, a Thai pop up. “They just want to have a relaxing morning with good people around and good food.”