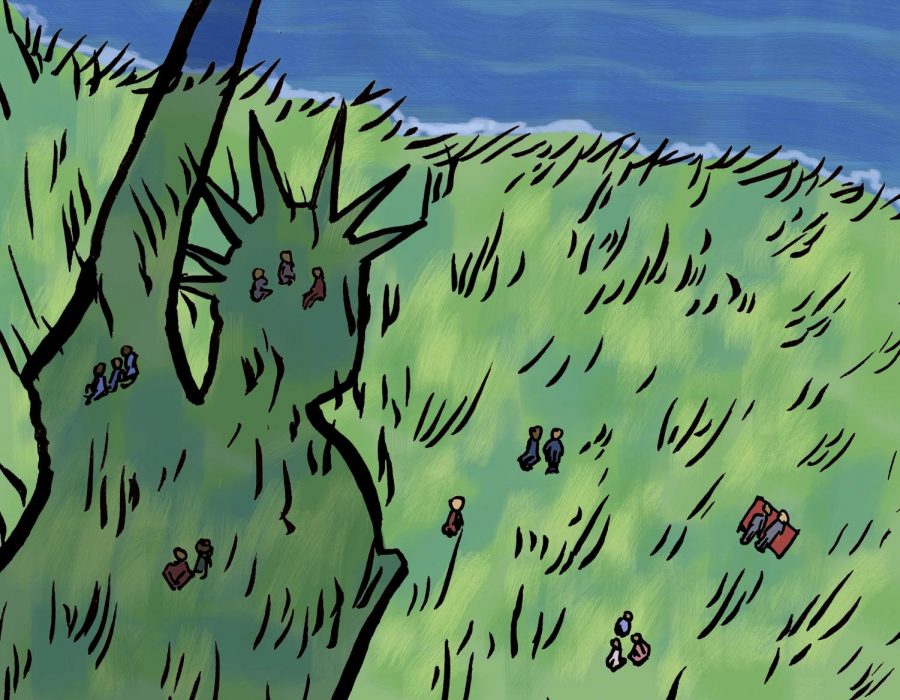 The Statue of Liberty is a symbol of how immigrants have shaped America. At Grady, many students are first-generation or second-generation immigrants.

Americans hear about immigration all the time. It’s in the news, in politics and on television; it’s in literature and in social studies classes. But some of Grady’s students are either immigrants themselves or children of immigrants, and for them, immigration is a deeply personal topic.

“Growing up having a different culture in my life was really beneficial for me, and I think that gave me a lot of empathy towards other people,” said sophomore Jamie Gray, whose mom is from Mexico.

Gray spoke both English and Spanish as a child, and influences from Mexican culture were present in her household as long as she can remember. She believes that the ethnic diversity in her family has made them more welcoming of religious diversity and the LGBTQ (lesbian, gay, bisexual, transgender, and queer) community.

“My mom is Christian, I’m an atheist, my sibling’s an atheist, my grandma’s Jewish,” Gray said. “It’s all over the place in beliefs and identities. Obviously, I’m trans and queer, and [my sibling] Luna’s queer, and my aunt is queer, and I think I was really fortunate to grow up in a household where we could all accept each other for that.”

Sophomore Nick Bizot is also the child of an immigrant; his mom emigrated from Germany to work in America. He believes that his close connection to Germany has had a definite positive impact on his life.

Senior Guianna Inoa Nuñez was born in the Dominican Republic, and her family moved to America when she was in fourth grade. When she came here, she didn’t speak any English, and the language barrier made her first few years in the U.S. difficult.

“All of my school life from fourth and fifth grade is silent,” Inoa Nuñez said. “I don’t remember any of the things they said because I didn’t understand it. All the things I heard and all the things I learned just don’t exist, except for the second half of fifth grade when it finally all clicked.”

Besides the language barrier, another stark difference between the Dominican Republic and America is their economies. Despite its share of political problems, the U.S. is one of the richest countries in the world. According to Inoa Nuñez, the Dominican Republic is a developing nation with an unstable and corrupt government.

“We’re all just fighting to get out,” Inoa Nuñez said. “My mom didn’t want to move here, but she said that it would’ve been selfish of her to hold us back from a better future, from education and rights.”

Inoa Nuñez’s Dominican background has helped her put her life in America into perspective. Things that most Americans take for granted may be seen as luxuries in countries such as the Dominican Republic.

“We always have food; we always have electricity; we always have water; the water comes out hot; we don’t have to boil water in order to not have a cold shower, and I feel like those are things we forget every day,” Inoa Nuñez said.

After overcoming a language barrier, Inoa Nuñez was now forced to grapple with a new issue: ethnic stereotypes. Immigrants, especially those of color, are subject to prejudice. This can manifest in different ways, from uncomfortable social expectations to legitimate racial profiling. Gray, who looks white, said that her family members with more Hispanic features are often mistreated because of their ethnicity.

“My sibling looks a lot more Mexican than I do, and they get treated way differently than I do,” Gray said. “People can be weird about it; people can have weird expectations of the way that we act, and I definitely think if you look white, you’re going to have an easier time doing things.”

Like Gray, Inoa Nuñez explained that many people find it difficult to empathize with immigrants’ experiences. Oftentimes, Inoa Nuñez feels as if she has to alter her personality to fit racial and ethnic stereotypes.

Harmful stereotypes about Hispanic immigrants are also perpetuated by the current U.S. administration. President Donald Trump has repeatedly criticized immigrants during rallies, press conferences and on social media, particularly Mexicans and immigrants of color or those from third-world countries.

Inoa Nuñez finds the president’s actions ironic. Ultimately, she said, “we all immigrated into this country; every single person here except for the Native Americans.” Every family has some sort of history of immigration, regardless of whether it was recently or not, and Inoa Nuñez believes that when people ignore this fact, it means that they are forgetting the struggle that their family once had to go through.

“[Policy] needs to be focused more on the people that are immigrating rather than the place they’re emigrating from,” Bizot said. “When you focus on the place, it discounts who these people are.”