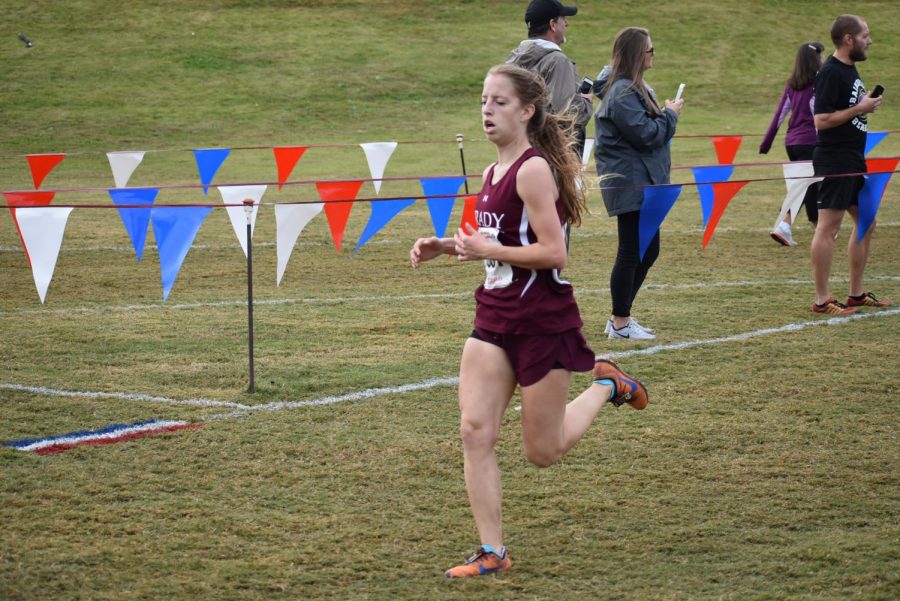 Senior Anna Tischer runs through the shoot into the finish at the state course in Carrollton. She placed second for Grady and 25th overall with a time of 21:16.59. This was Tischer's fourth and final state meet of her high school career.

The girls team won the Region 6AAAAA meet and the boys placed second, with the top five all running under 18-minutes, but falling short to Decatur. Both teams finished fifth at the State Class 5A meet for the second year in a row.

“I think we covered everything when it comes to training,” junior boys team captain Bram Mansbach said. “We were out there every morning and afternoon doing distance and speed, but I think next year, for sure, we are going to pick up the distance training especially and move on to other training like biking and working out in different ways.”

Even though the teams were successful, they were comprised mostly of younger runners. The girls team only had one senior, Anna Tischer, and the boys had none.

“This year was just a matter of developing the younger runners to make sure that we filled in for the girls who graduated, and I think we did well with that,” girls coach Jeff Cramer said.

“I knew it would be challenging to do well because the other runners are a lot older than me,” Spears said. “They have more years of experience, but I just learn off of them.”

Freshman Everett Schroeder placed first overall in the junior varsity race at region in 17:57.96 and became sixth man on the state team after beating several varsity times. At state, he finished 74th overall in 18:36.3.

“I felt good because I have gotten a lot better since last season, and it all came together in the meet.” Schroeder said. “I was hoping to make varsity for state but not expecting to. I was expecting to be just outside of it.”

Lindsay Schroeder, came in first for the girls team at state and 19th overall with a time of 20:46.06.

“Heck yeah [I am happy with my time],” Schroeder said. “State is a lot harder than region, but I only went 20 seconds slower so that was really good.”

After senior front runners Aidan Goldston and Isaiha Davis graduated last year, the boys team needed to improve to make up for the big losses.

“I feel like our team improved a lot this year. We lost two good runners last year, Aidan and Isaiha, and a lot of people stepped it up, and we realized that it was more of a team sport this year by pack running and going to practice every morning and afternoon and this showed at our competitions,” Mansbach said. “We were a lot closer together, and so when we finish as a team, it really helps with our mentality.”

The coaches were pleased with both teams’ results and the boys are looking to improve next season with no graduating seniors.

“If we finish in anything less than second, I am going to be disappointed,” boys coach and athletic director John Lambert said.

Once Tischer graduates in May, the girls team will look to its younger runners to fill the gap she left behind.

“It depends on whoever else comes in and how they — do whether they train over the summer and all those kinds of things so who knows,” Cramer said.