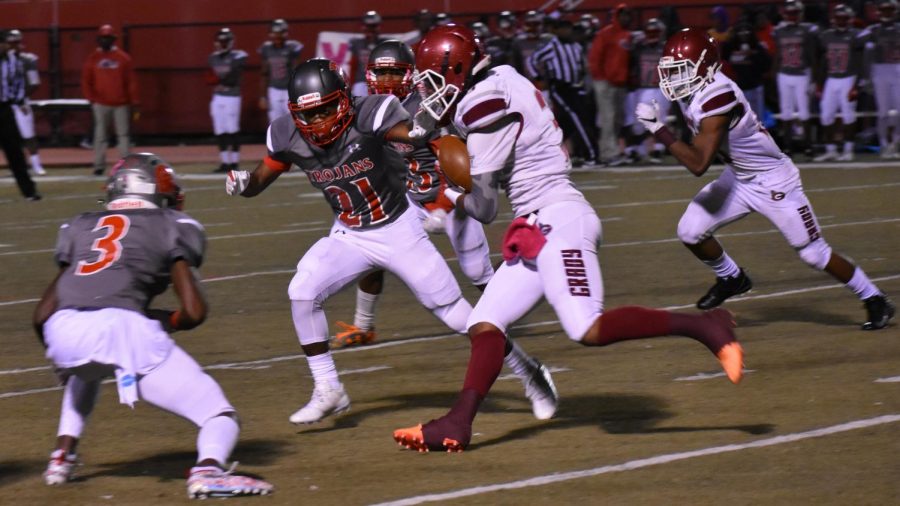 Senior quarterback Harris Clement runs for a short gain in the first quarter of Grady's last game against the Banneker Trojans on Nov 2. The Knights lost 45-7 putting their final record at 1-9.

Banneker used a spread option offense to amass nearly 300 yards on the ground to beat Grady 45-7 in a game between the first ranked team in region 6AAAAA and the last.

Led by freshman running back Jamill Williams, who reached 1,000 yards rushing on the season during the game, the Trojans run-based offense tore apart the Knights defense, scoring four touchdowns on the ground. The win gave Banneker the region title and left Grady at 1-9 to end the season. Grady last finished 1-9 during the 1976 and 1977 seasons.

“I think we played well, but we just weren’t able to make enough plays in the end,” Grady head coach Kevin Clark said.

After holding Grady to a three and out on the Knights’ first drive,  a good punt return gave the Trojans good field position. Banneker’s smash mouth offense showed why the Trojans were the best in the region as they continued to put the ball on the ground. After great running from Williams, running back Trevon Pope capped off a 7 play, 50-yard drive with a 15 yard touchdown. Banneker led 7-0 with 1:54 left in the first.

Another three and out gave the Trojans the ball back, and Banneker’s speed option put the Trojans in the red zone once again. However, three costly penalties pushed them out of scoring distance. Quarterback Nick Williams made up for the penalties completing two key passes that gave way to a 2-yard touchdown run from running back Gary Benton Jr. The Trojans led 14-0 with 8:40 left in the second quarter.

With 1:35 left in the half, Grady picked off Williams and return the ball to the 2-yard line putting the Knights in scoring position for the first time. On the first offensive play after the turnover, Grady senior quarterback Harris Clement punched the ball in from 2 yards out. The touchdown pulled Grady within a touchdown at 14-7 at the half.

“I expected us to compete just like we did in the first half, but I wanted us to do it for four quarters and not just two,” Clark said.

The Trojans came out full force in the second half as Williams broke a long touchdown run on their first drive for 55 yards, putting Banneker up 20-7 with 8:35 left in the third quarter. Banneker extended the lead throughout the half, and with many players playing on both sides of the ball, the Knights couldn’t keep up on both offense and defense.

“We ran out of momentum once the third quarter hit, and with all those guys going both ways, it hurt us and it wore us down,” Clark said.

Grady did show some sparks of life as junior quarterback Aquinas Stillwell connected with Clement, who doubles as quarterback and receiver, on a 40-yard strike along the sideline midway through the third quarter. However like many of their drives, the Knights couldn’t keep the momentum and gave the ball back to Banneker.

Banneker drove 78 yards in 10 plays. The Trojans scored again as Ashaad Baldwin went 8 yards and put the Trojans up 26-7.

Two Stillwell interceptions, one returned for a touchdown, cemented Grady’s tough second half. After the second interception, Williams capped off his night with a 2-yard run and gave the Trojans the 45-7 win and the Region 6AAAAA crown.

The Knights look to rebuild and work hard during the offseason, Clark said. The 1-9 season marks the second consecutive losing season for the Knights after not finishing below .500 for more than a decade.

“We need to get a little stronger during the offseason and make sure that guys are committed and showing up to practices,” Clark said.