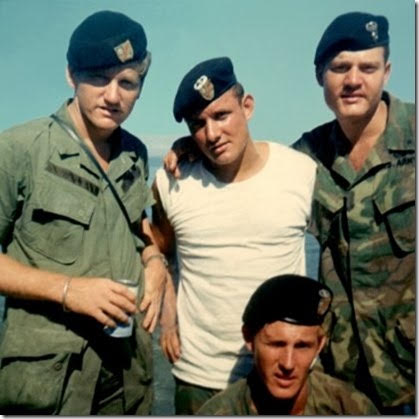 Sgt. Lloyd "Buzzy" Grimes (back left) stands with members of his Long Range Reconnaissance Patrol Dallas 17, including Randy White (back center), a few days before he was killed in action by a sniper in the Vietnam War on Sept. 25, 1970. He was 23 years old.

More than 50 years ago, Class of 1965 alum Lloyd H. “Buzzy” Grimes II spent afternoons throwing baseballs in Virginia-Highland’s Brookridge Park, now Orme Park. In the mornings, he walked through the neighborhood on his way to school. After classes, he ran track and pole vaulted.

Like many teenagers today, his mind was focused on school, sports, friends and love. At 15, Buzzy met his future wife, Marsha Grimes, with whom he would have two children.

After graduating from Grady, he enrolled in some college classes, then took a job. He loved his motorcycle and James Brown’s Rhythm and Blues album “Live at the Apollo.” In 1969, a few months after marrying Marsha, he received his draft notice from the U.S. Army for the Vietnam War. It was not a surprise.

Buzzy was a ranger, having attended necessary courses, and he continued to take military training classes in the U.S. for a year into his draft service. He became a sergeant, and in 1970, he traveled to Vietnam with the 3-506 Battalion. There, he joined a Long Range Reconnaissance Patrol named Dallas 17 and became a 101st Airborne Ranger.

“They would go out beyond American lines into enemy territory and pick out targets that they felt like needed to be taken out in order for the American troops to advance into certain areas,” Rusty Brooke, a Class of 1965 alum, said.

Buzzy was on a team of five soldiers. On the day he died,  their helicopter landed in a 1,000 square meter box in the middle of the jungle. From Marsha’s understanding, the soldiers formed a triangular formation as they walked, with Buzzy at the point. After some time, a sniper shot him.

Randy White was one of the soldiers in the patrol. He said he was about 50 meters away from Buzzy when he died and heard someone say, “Grimes is a bad hit. I think he’s dead.” There wasn’t much they could do.

Marsha received documentation verifying his death. At the time, she was 22 with a 2 month old baby and a 4-year-old. She didn’t know how extreme his role in Vietnam was as the letters he sent home didn’t speak of it, or were censored. He was buried in the Marietta National Cemetery in Cobb County.

For the class’s 50th reunion, about 50 friends, family members and graduates of Grady’s Class of 1965 gathered on the upper courtyard to dedicate a bench in honor of Buzzy. Its plaque reads, “SGT Lloyd “Buzzy” Grimes, KIA Vietnam 1970, Class of 1965.” Art teacher John Brandhorst directed the bench’s installation.

“It was as formal and as lovely and precise as any military memorial could be,” Brandhorst said.

JROTC members presented a formal flag ceremony. They passed the flag to Buzzy’s son Adam, who was present.

“I thought the memorial service was important for many reasons,” Brooke said. “One, it provided closure for our classmates, the ones who came to the service. They could do something physically by their presence in honoring the classmates who had served in Vietnam and Buzzy, who had died there.”

The Vietnam War, which the U.S. entered in 1965, was controversial from its beginning. Those who believed the war was necessary to fight communism clashed with those who saw it as the undignified killing of Vietnamese civilians.

In a matter of years, society changed entirely. Brooke noticed it in “dress, language, everything.” Protests broke out, and Marsha participated in them.

“It was a nasty affair, Vietnam,” Marsha said. “Nobody came out a winner.”

She fought for civil rights, too — a cause which Buzzy also supported. Once, the two shook hands with Atlanta civil rights leader Martin Luther King, Jr. at the Purple Peacock nightclub in downtown Atlanta.

“He was fearless,” Marsha said. “He thought people were people, and everybody deserved a fair chance.”

Buzzy’s life could have followed a different path; he could have come home to his awaiting family. But he didn’t, and years later, he is remembered, always, whether by those visiting the Vietnam War memorial in Washington, D.C., or by those sitting on the bench dedicated to him at Grady.