Another mass shooting: how and when will it end? 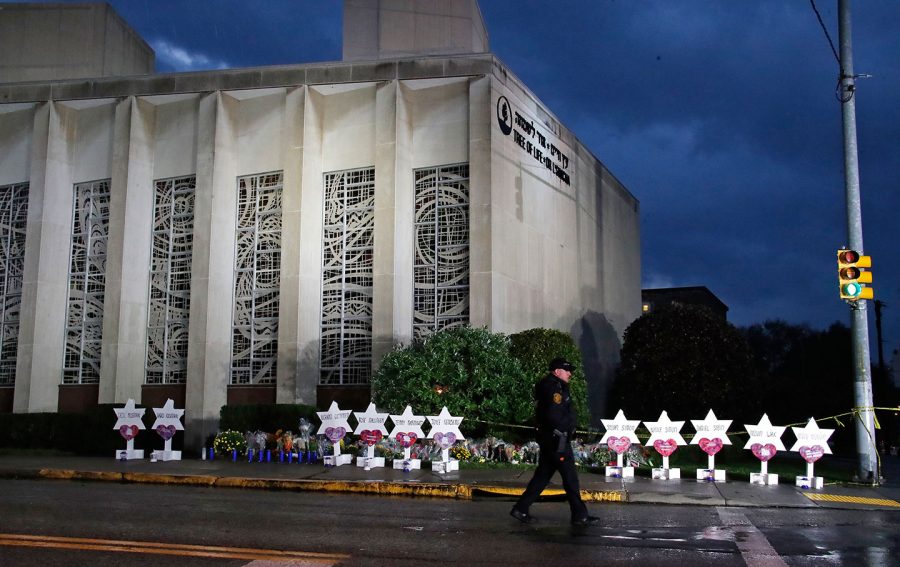 A memorial in Pittsburgh at the Tree of Life synagogue.

At Grady, as far as I know, I am one of six observant Jewish students in the 12th grade. There is often confusion at my school about Judaism. There will be jokes about how winter break is called “Christmas Break,” remarks about a sensitive topic, the Holocaust, and puzzlement why I have to miss school certain days of the school year.

If anyone asks, I am happy to clarify and answer any questions. I know at my school, there isn’t anti semitism, but just an overall misunderstanding of the history and religion as a whole.

Through it all, there has often been a feeling I have to shield my religion in certain circumstances, in case there are people out there who see me as different or who have something personally against my religion. The Oct. 27 Pittsburgh shooting was not only an attack on the Tree of Life synagogue, but an attack on all Jewish people when the perpetrator shouted “All Jews must die” while opening fire, killing eleven.

I am proud to be Jewish, but it is clear to me in public, you have to be careful. I don’t leave the house in a shirt with a big Jewish star on it, for example. Synagogues are widely known as  “havens” just as churches or mosques are. They are there for the purpose of allowing anyone in who wants or needs a place to think, pray, and seek guidance and advice. There is now the difficult position of balancing helping those in need, keeping the doors figuratively and physically open, while having necessary security protection, locks and guards in place in light of recent events.

In the Talmud it states, “One who destroys a single life, is as though one has destroyed an entire world.” Just as school shootings devastate the entire community, so do hate crimes, such as this. I try to wrap my head around why someone would do this and what would cause them to commit such a devastating and monstrous act, but I draw a blank. I don’t understand why.

Originally, upon hearing the news, I was angry, as if the world was against “us.” With time, it isn’t the world, but one individual or a few who have a deep hatred towards the Jewish people. Moving forward, all I can think of is the ounce of good that can come out of this tragedy. A tragedy, of this magnitude, has the power to bring people together and prove we are stronger than hate. It is clear the world is a good place because Pittsburgh and the Tree of Life have received so much love and support in the days following, even though thoughts and prayers will never make the aftermath any easier.

In the past year, there were bomb threats against dozens of Jewish community centers nationwide, but no one could have foreseen something this extreme taking place. The perpetrator posted on a social media site against the HIAS, a Jewish refugee resettlement agency, which stands for Hebrew Immigrant Aid Society, but still no one could have predicted he would act on these feelings.

I hope, even though we live in Atlanta, 684 miles from Pittsburgh, we still reach out and think about what has happened, rather than carrying on with our lives. We can’t continue this cycle of feeling anger, mourning, and then just moving on. If we don’t want to continue reading about these tragedies in the paper and on the news, everyone has to do something to make a change.