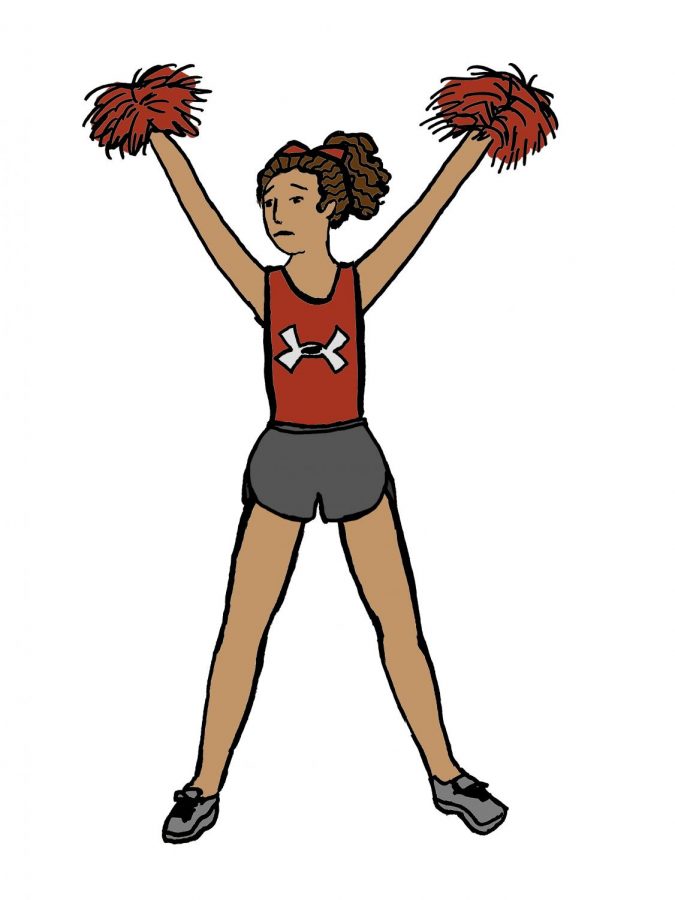 Satirical depiction of a Grady cheerleader in an Under Armour cheer uniform.

The cheerleaders’ cheeks blushed from embarrassment as the opposing team laughed at them. They tried to pull their shirts down, but the baggy fabric still stuck out like a sore thumb. Their coach, however, did not care if the cheer squad looked ridiculous; she only cared that the Nike logos on their shorts weren’t visible.

The popular athletic gear company Under Armour has recently become a sponsor of all Atlanta Public Schools’ athletic teams. The sponsorship will provide teams with Under Armour gear, but, in the meantime, student-athletes can’t be seen in any other clothing brands. Students caught wearing other athletic apparel will be cut from their sports team, face other disciplinary action and will have their other branded uniforms torn up and burned.

This new policy, however, was implemented before all teams got their uniforms and gear. That’s why the cheerleading team was forced to warm-up with their shorts on inside-out.

“It was so uncomfortable,” sophomore cheerleader Lilly Barnard said. “The shorts have built-in underwear; they obviously weren’t made to be reversible. Now I have chafe marks on the insides of my legs from the elastic of the underwear.”

That is only one example of the disturbances caused by the policy change; there have been many others.

“I missed practice on Friday morning last week because I had an early morning orthodontist appointment, and I didn’t think it would be a big deal,” James Hender, a senior on the cross country team, said. “But the next day, we had a big meet and our coach didn’t bring the new uniforms and I couldn’t compete because I hadn’t gotten mine. I might have been able to qualify for state at that meet.”

There have been some speculations as to why APS has enforced the sponsorship’s new rules so quickly and strictly.

“My friends and I think this change is being made because of the whole burning and cutting of Nike products thing,” junior cheerleader Amanda Hoover said. “Maybe APS is just worried about our safety.”

Hoover was referencing Nike’s new endorsement of Colin Kaepernick, a former quarterback for the San Francisco 49ers who gained attention for kneeling during the National Anthem, and how it has created protests of Nike products.

“The Under Armour sponsorship is great and all; I’m just a little concerned with what it means for my son and his team,” Mike Keller, parent of a boy on the soccer team, said. “A lot of the guys have Nike cleats, and the sponsorship isn’t going to pay to buy new cleats for all of them. Some of the boys can afford to just buy new shoes, but that’s not a luxury everyone on the team has.”

This concern has been taken up with APS board members, and hopefully, there will be an answer and a solution soon.

“I think this sponsorship is going to be a really good thing,” Michelle Harvon, an APS board member, said. “We just have to work out a few kinks.”