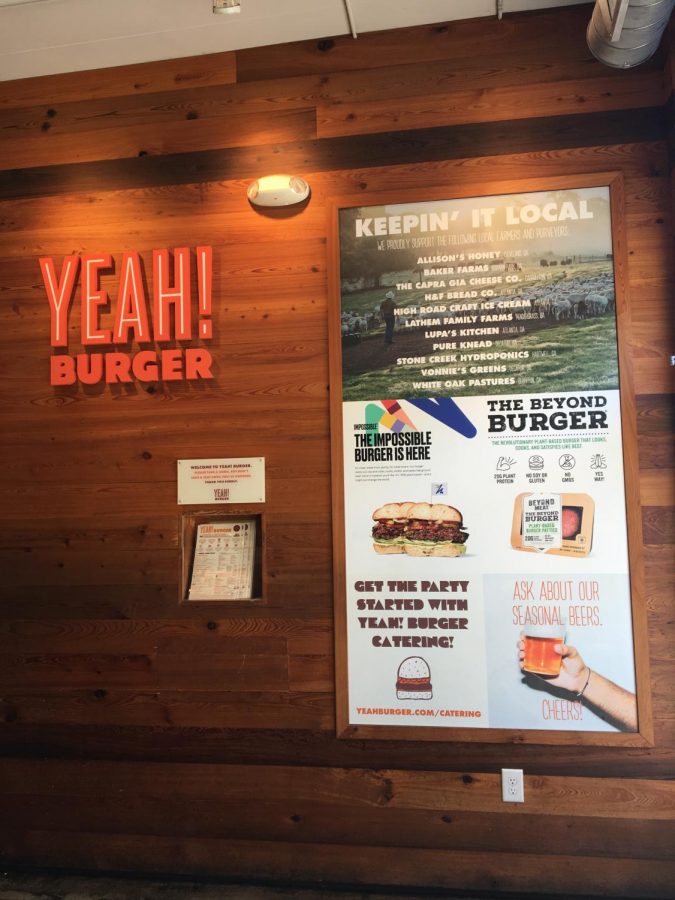 Walking through the front doors of Yeah! Burger in the Virginia Highlands, a poster advertising the Impossible Burger broadcasts its existence on the menu.

Once deemed impossible, a burger that tastes like meat without the use of animal products, is now possible, with the Impossible Burger.

“No animal, no compromise” and “it’s just plants doing the impossible” are a few slogans the Impossible Foods company uses to describe itself. The company’s mission, to make meat solely made of plants, so that humans can eat meat as long as they want while saving the planet, has sparked intrigue in not only huge investors like Bill Gates and Google ventures but also local restaurants around Atlanta.

Impossible Foods first released the burger in 2016 after spending five years researching and cultivating a plant-based burger that perfectly replicates a meat burger. The burger is now being sold in more than 1,000 restaurants across the United States, including Yeah! Burger in the Virginia Highlands and Grindhouse Killer Burgers on Piedmont Avenue.

Grindhouse’s burger joint in Atlanta was the first restaurant to sell the Impossible Burger in Georgia and was soon being served in all five of Grindhouse’s Georgia locations. Although the Impossible Burger is not available in grocery stores or online, the company hopes to enter into retail as it grows. Meanwhile, the number of restaurants selling the burger across the nation is increasing rapidly.

At the beginning of 2018, Impossible Foods partnered with the nation’s largest food distributor, DOT, to make it as easy as possible for restaurants to obtain the Impossible Burger. This could potentially mean schools and other food outlets could offer the burger, including Grady. The only thing slowing the process is the FDA’s approval of the burger and its key ingredient, leghemoglobin(heme). Since heme, a substance found in the roots of soybeans and then fermented with genetically engineered yeast, has not been consumed by humans before this point and raises a potential allergen concern, the FDA has been reluctant to approve the burger.

The burger can still be sold in restaurants because it has not been proven harmful to consume; its popularity and minimal negative reviews across the nation shows the Impossible Burger is opening many peoples eyes to the possibility of life without eating meat.

According to the research firm GlobalData, the number of U.S. consumers claiming to be vegan rose from 1 percent in 2014 to 6 percent in 2017. Veganism has become a trend on the rise at Grady as well. It is becoming easier and easier to convert to being vegan as new products like the Impossible Burger are coming out.

Not only does the Impossible Foods company claim their meat “delivers all the flavor, aroma and beefiness of meat from cows” but that it will save the planet. By choosing to eat an Impossible burger over a meat burger, 75 square feet of land, one half tub of bath water, and 18 miles of emissions in a car is saved according to Impossible Food’s website.

As the Impossible Burger starts to be served in more restaurants across the United States and possibly grocery stores and school cafeterias too, the Atlanta community and Grady itself may see the effects of this new higher level of non-meat foods.