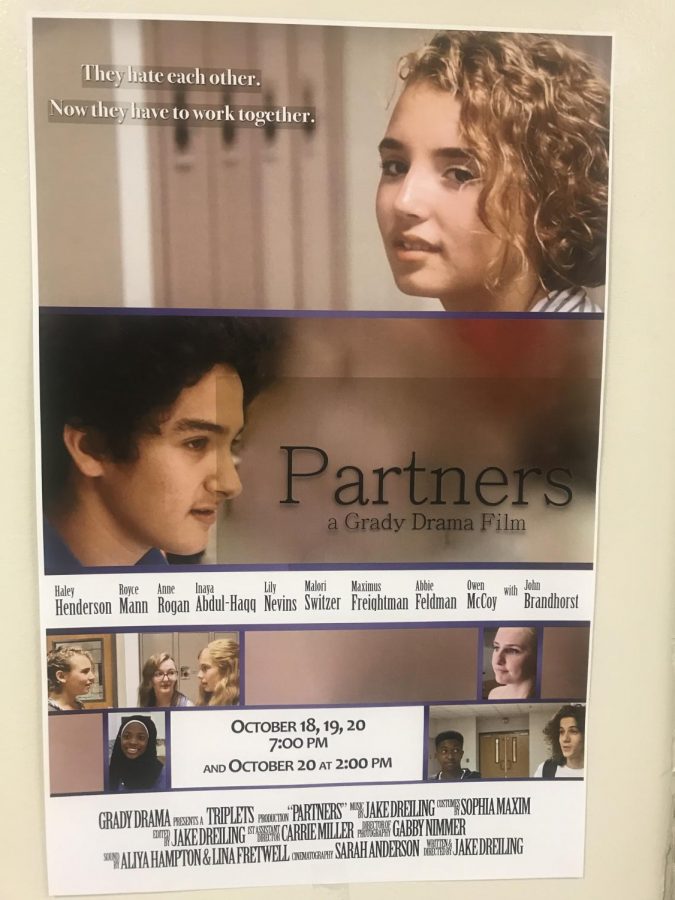 Movie posters advertising the Grady film 'Partners' lined the Grady halls on the week leading up to the shows.

“Partners” was intriguing from the first frame. It opened with Moonglow Tanner (Haley Henderson) standing in a hallway alone and the lighting dramatically changing.

This film follows the lives of Moonglow Tanner and Carter Ryan (Royce Mann) after they are assigned as partners for a collaborative project in art class. Moon hates Carter because he is a player who disrespects women, but they have to put their differences aside to get the project done.

Sure, “Partners” had aspects of a cliche high school narrative. There was a hallway confrontation that ended with Moon storming off, love interests and couples, and a stereotypical mean girl, Bianca Johnson (Lily Nevins), who perfected the eye-roll. However, “Partners” looked at the typical high school story from a different perspective. The metaphor between Carter and Moon’s friendship and the art that they were working on together was tastefully executed and added color to the story.

Additionally, Moon is a member of the LGBTQ+ community, which adds a unique angle to the story. In the film, she has a crush on Ashley Williams (Inaya Abdul-Haqq) and has a nervous, flirty encounter with her. It’s refreshing to see something that’s unlike the typical trope of a girl fantasizing about a guy.

The acting seemed forced at times, but overall each actor did a good job at making their character compelling. Henderson did an incredible job with Moon. She showed emotional depth and connectivity with the character that enhanced her performance. Mann did an outstanding job portraying the frustrations of trying to live up to the high school standard. Through his acting, he showed that there is more to a person than meets the eye.

The cinematography was artistically well done, with a contrast between shots that kept the audience’s attention, and the film style suited the plot very well. There was a nice change of scenery within the Grady campus, which gave the viewer a look into what actually goes on during the high school day.

However, some small aspects made “Partners” different from the average high school experience. It was unrealistic how Moon went from hating Carter to telling him things she hasn’t even told her best friends, simply because they worked together on a project for art class. It was a short film so a sped-up timeline was to be expected, but it would have helped the plot if we saw more tension and build up between Carter and Moon before they decided to open up to each other. On a minor note, the Grady halls are typically much busier than what appears in “Partners”, so it would have been more accurate if they had more extras.

Overall, you should definitely go see “Partners”. It was invigorating to see a high school film with actual high school students as cast and crew. There is a well-balanced mix of serious and funny moments that will keep you entertained. All in all, “Partners” was a captivating film, especially for a high school production.