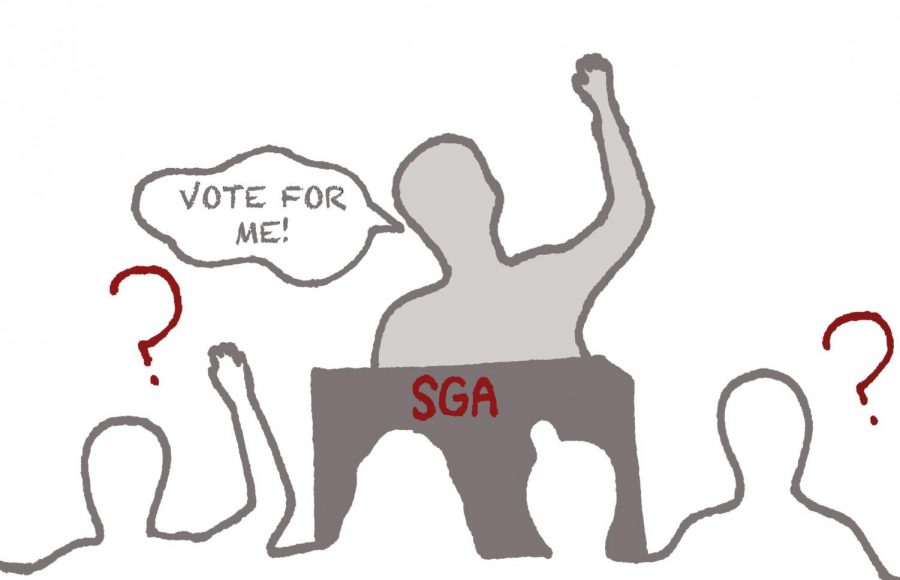 Students are often unaware of what each SGA candidate stands for.

Although most Grady students are too young to vote in the midterm elections, they still have voting opportunities through the Student Government Association.

Knowledge about who the candidates are, their roles in government, their stances on issues and the changes they support is a key aspect of voting in a state or national race for a governor, legislator or the president. These points should also be known to voters in high school SGA campaigns, but at Grady, these basic “must knows” are unknown.

What do they do?

“I most definitely think there needs to be more awareness,” senior and SGA Executive Vice President Kendal Evans said. “People see it as just having a title, but it’s more than that. SGA helps to decide events. Sometimes, we even have to make decisions for the school. Making people aware of the duties of SGA actually encourages people to participate, and it can help to push others who want to run in future years.”

There also may be a lack of interest in participating in Grady’s student government. This year, nine SGA representatives ran unopposed, and the juniors were the only grade level able to fill all of the officer positions. Within the SGA, there is an executive president, executive vice president and executive secretary who are in charge of the entire student body. Each grade has a president, vice president, treasurer, parliamentarian and secretary.

“I was disappointed that I was the only 9th grader to run for student government,” 9th Grade Class President Aaliyah Rapping said. “I feel like maybe people in my grade don’t understand what SGA is due to lack of student government exposure.”

The SGA is in charge of helping plan Homecoming, pep rallies, school fundraisers, class trips and other school-wide activities and events, such as Black History Month and Career Day.

“Their main responsibility is being a voice for their student body,” SGA sponsor Brooke Ramey said. “Whatever the students are voicing their concerns for, it is their responsibility to make note of that and try to find a solution.”

“Teachers could talk about it, posters could be put up explaining what they do, or they could use advisement to let students know their plans,” Kohanowich said. “It is really not that hard; I just don’t know why it hasn’t been done yet.”

Although the elected members of the SGA change year after year, one trend remains constant. In past years, black females have made up the majority of the SGA. According to Evans, out of the 13 members of the SGA this year, there are about nine black members, three white members, and one Hispanic member, underrepresenting white and male students in the general school population. Only two of those 13 members are male.

“At Grady, we like to think of ourselves as diverse, so we would probably expect the student government to reflect the makeup of the student body,” said senior Harry Suazo.

“I think that it is actually a wonderful thing to see so many black females running and getting the positions that are in charge of basically controlling and helping a whole grade because we often don’t see black female leaders in office for the actual government for the country,” junior Lila Chiles said.

“There was a very diverse number of applicants, but they just did not follow through with submitting their actual application,” Ramey said. “This was a year that we had the most diverse students to inquire, get applications, but however, not as many of them followed through.”

Racial homogeneity exists outside of the SGA in other extracurriculars as well.

Currently, voting for the SGA representatives is an online process. Ballots are submitted on Google surveys linked to the school’s website. Some students think the process is inconvenient and opt out of voting as a result. According to Ramey, around 300 to 400 students voted out of the school’s 1,386 students.

“I feel like it was more accessible to vote at Woodward than it is at Grady,” said junior Jordan Tucker, who switched schools from Woodward Academy, which is a private school in College Park, this year. “It is harder to vote at Grady because you do not have a school email and the ballot is not emailed to you.”

“I think that having it online makes it harder for people to vote because if you don’t have a phone or you don’t feel like typing the link in[then you won’t vote],” Hadley said.

This year voting was attached to students’ school IDs, restricting students to only one vote. However, there are still problems with students voting for other grades’ representatives. Students sometimes vote for candidates without knowing who they are.

Chiles thinks students should only be allowed to vote for their grade’s representatives.

“That way, it is less of a ‘who knows more people in other grades that can vote for them’ thing and more of a true process where the people in the grade actually know the candidates and their strengths and weaknesses,” Chiles said.

There are also concerns about whether students vote based on their like or dislike of the person instead of competence.

“If more people actually talked about why they should be voted for and have specific and good reasons, I know that would help a lot,” junior Vidhya Osinuga said.

No election speeches or debates occur. The main form of campaigning manifests in candidates plastering the school’s halls and staircases with posters advertising themselves. The majority of students do not know what each candidate stands for or plans to do during the year.

“The fact that you do not have to give a speech really means that the only reason people would vote for you is if they know you, so it is like 100 percent a popularity contest,” Hadley said.

This “popularity contest” involves no knowledge of the changes each candidate hopes to initiate, leaving some students with a feeling that their vote is meaningless.

“Let’s say that [speeches] become a popular idea that kids would like to see,” Dawson said. “Then we take that into consideration for the next year and slowly begin to change. If it is a popularity contest, moving away from that [and] moving towards academics or matters that students are talking about.”