Life as a twin: Palaian’s inside perspective 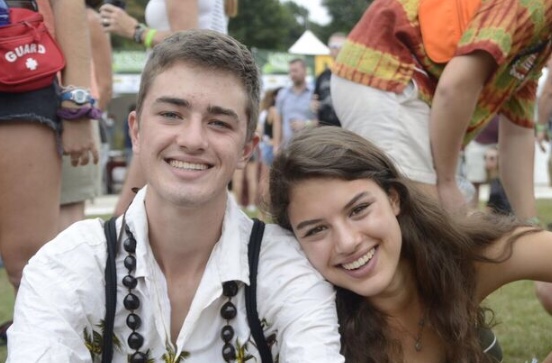 TWINNING: Jack and Kaitlin Palaian display their twin bond at Music Midtown this past September.

Don’t get me wrong; I love my brother Jack. Our two opposite personalities complement each other, but having to see one person every day can be hard for any relationship.

First, I would like to clarify a few things. Jack and I are fraternal twins. Fraternal twins are not identical, so we look nothing alike. “Are you identical?” is one of the first things people ask when you tell them you are a twin. That and “What is it like being a twin?” How am I supposed to answer that question when I do not know anything different? “What is it like NOT being a twin?” is what I often choose to retort.

I would also like to clarify that twin telepathy is not real. We cannot read each other’s thoughts, nor feel each other’s pain. Jack is his own person, and I have no idea what is going on in his mind.

Once, our friends in fifth grade who were performing in a synchronized swimming act at our school’s talent show wanted Jack and me to hold the tarp for them because of our supposed ‘twin telepathy.’ They thought that we would be able to ‘send messages’ to one another about when the tarp should be moved up and down.

Contrary to that, there are times, in class especially, where a funny or odd comment is made, and my brother and I will exchange looks across the room. We both know exactly what the other is thinking. But again, instances like these happen in any relationship where one person spends too much time with another.

As for having classes together, it is interesting. Classes consist of fun moments but also more harsh interactions. Weirdly enough, sometimes we barely acknowledge each other in class. Our interactions are dependent on our moods.

Sometimes, we do get irritated with one another. Our clashing personalities are often the cause of frequent eye rolls and sarcastic comments. Jack is way more outgoing and talkative in class. I, on the other hand, am more reserved. It also does not help that we are competitive people. Admittedly, Jack will be right in an argument 90 percent of the time, but I do my best not to let him know it.

I think it is unfair to compare twins. Jack and I have different interests and completely different skill sets. To compare the two of us in any of those skill sets would be inconsiderate. I have no idea how to play ultimate frisbee, nor do I have the ability to run a sub 18-minute 5K, or the mind to quickly comprehend and memorize information. We often feel pressure to be better than the other, and that should not be the case.

As for the question “Who was born first?” all it does is make the older twin feel superior. Jack definitely holds his slight seniority over my head. Because of a complicated, freaky fast delivery, Jack is about 30 seconds ‘superior’ to me, and it is often brought up with a comment about

“When I was your age …,” where he proceeds to tell me what he was doing 30 seconds before. It makes no sense because likely he will be doing the same thing as me within that time frame. I can imagine that this is the case for most twins, and in the end, it should not matter. It is only annoying for the second born. For all the younger twins out there, I understand your pain, trust me.

Jack and I have a unique connection most people will not understand. We do not have twin telepathy, nor do we look identical. We have differing interests that make us who we are. Although having a twin can often be annoying, I would not have it any other way.