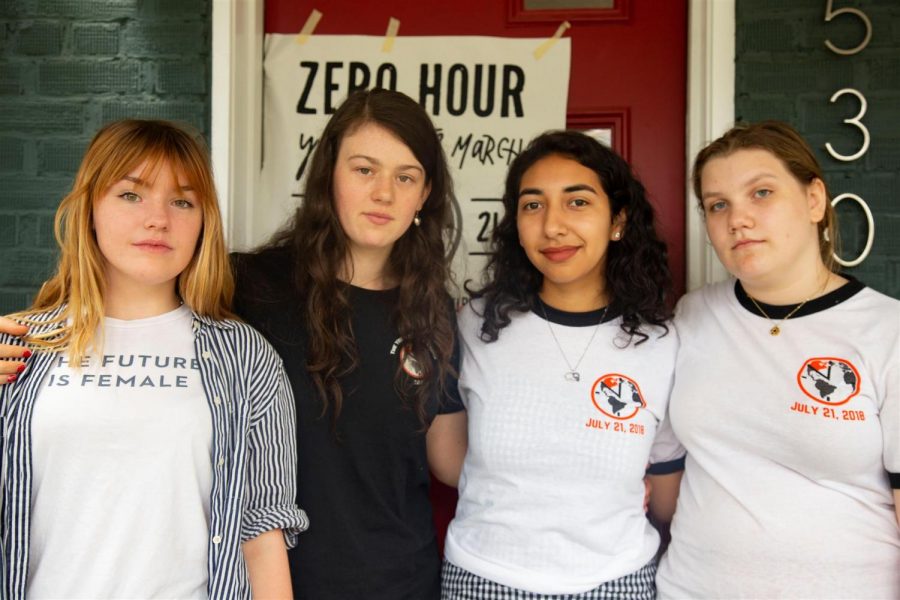 Esme Rice (left) stands with other members of the Zero Hour team. (Courtesy of Greenpeace)

Senior Esme Rice has always been interested in environmental activism. Two summers ago, she attended the Climate Reality Leadership Corps in Seattle, led by Al Gore. Out of the 800 people invited, only 12 of them were youth.

Rice and the other youth lamented the small amount of young people. They decided to create an organization solely for youth, run by youth, to encourage activism among the younger population. Their idea became the organization Zero Hour.

“We called it ‘Zero Hour’ to emphasize the urgency of what we’re doing.” Rice said. “We’re already seeing the effects of climate change. We wanted people to realize that we’re out of time.”

Rice’s initial idea for the group was to lead a march for climate change in Atlanta. However, they wanted to make their movement national, so they chose Washington, D.C.

“We wanted to create a movement for elected officials to see how much of us there are who care about [the environment].” Rice said. “How we’re growing up in this environment, and ‘if you’re not going to do anything about it, we are.’ I think a march is a good idea to show who’s leading the movement, to show who really cares, and to show how powerful we can be.”

“When I looked into what Esme was doing, and I looked into Zero Hour, I realized I can do something to make a difference,” Fazenbaker said. “Zero Hour shows that young people can do other things than vote to help.”

Though the Atlanta march was smaller than many sister marches, it attracted attention. The route took marchers past many attractions in Centennial Olympic Park.

“I wish more people had come,” Fazenbaker said. “But a lot of people asked me what we were doing and asked to take pictures, so it was good to spread the word. I feel like we raised awareness to the people around us.”

Sophomore Abby Edlein also attended the march. With previous experience in advocacy like the  “March for Our Lives” movement against gun violence earlier this year, she credits her interest in activism to Atlanta’s culture.

“Atlanta is an incredible city where movements are started and supported, so there’s no reason for me not to be involved,” Edlein said. “I went to Springdale Park for elementary school, the first ‘green’ school in APS. Recycling and saving the Earth was really important there, and it stuck with me.”

Both Fazenbaker and Edlein discovered the organization and march through social media. As a youth organization, Zero Hour puts emphasis on tech savviness and connecting to people through various social media platforms.

“We got so much attention online for [the marches], which is really important for any movement,” Rice said. “We are very active online, which I think sets us apart. That’s what people pay the most attention to now. Online is where people can learn about you the most.”

For the past year, Zero Hour had been preparing for these marches. Now the organization is in the middle of its “town hall initiative,” which focuses on outreach to interested young people and encouraging them to attend their town halls and speak to their elected officials.