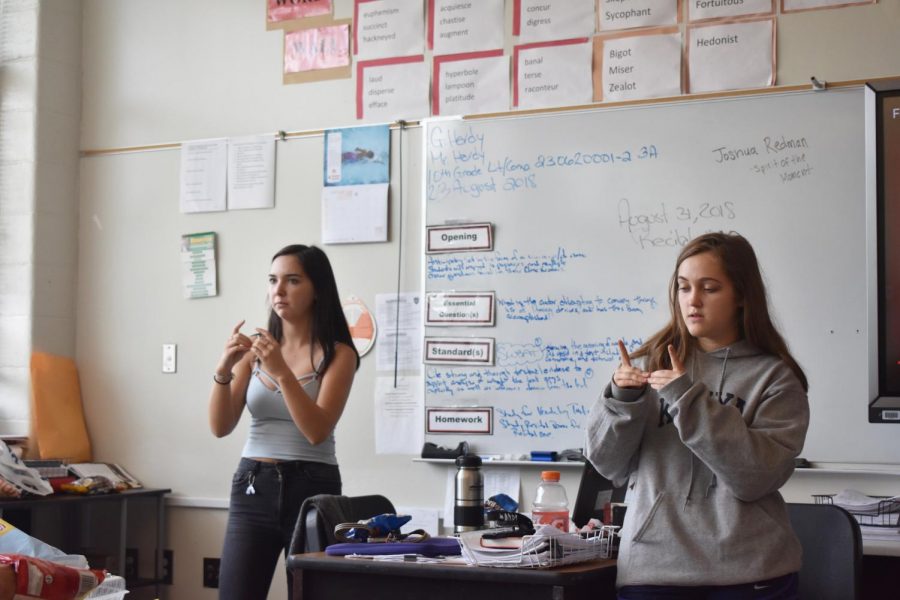 In order to start a club at Grady, a student must fill out a form explaining the club’s purpose, get a sponsor and 10 other people to sign the form. The prospective group must also get the principal’s approval.  Once finishing approval process, Lawson promoted the club with flyers advertising an interest meeting.

“When you’re starting a club, I’ve realized that it’s a little more of a waiting game than I thought there would be,” Lawson said. “And then you have to be promoted and say the right things. And then I’ve been creating a master calendar. Since we’re an educational club, I think that there’s a little more planning that goes into it.”

“I got involved because my friends and I previously were talking about creating a club, and I have always wanted to learn sign language, so I thought it was a great idea,” Schulz said. “It was around the end of May last year when Liah mentioned about starting a club and she had many ideas. When she mentioned the idea about sign language, I thought it was a great idea, and it just stuck.”

The club’s sponsor is ninth grade literature teacher Gary Hardy. He will help with the club every other meeting, as the club meets every Thursday. As the sponsor, his main role is ensuring there is a safe place for the club to meet and that the club follows all rules.

“I’ve really enjoyed what I’ve experienced so far,” Hardy said. “I think the girls [Lawson, Schulz, and Bransford] are doing a really great job. They’re engaging everyone, and the students that are learning seem really invested, and we’re all learning from each other.”

Healthcare teacher Leola McNeill will also assist. She has been signing for deaf members of her church for over 30 years and currently teaches deaf Sunday school. She will learn as well, since she only knows British Sign Language (BSL) and the club uses (ASL). BSL, according to McNeill, is less concise than ASL.

“I want to improve my sign language, and they’re bringing in people who actually do it at the college level,” McNeill said. “I’m really excited that they brought sign language here. I was telling my deaf Sunday school class that we have a club. You have clubs for everything else, but this is the first time I’ve seen a club for the deaf. They were very excited about it.”

Georgia State student teacher Judith Emerson, who studies sign language, will be an additional club leader. Lawson thinks the format of the meetings will change throughout the year as people become more experienced with sign language. At the first meeting on Aug. 16. , students learned the ASL alphabet and other basics, such as signs for foods.

“We are a brand-new club, and we’re a student-run club, so there could be a lot of faults and inconsistencies at first that we’re going to work out,” Lawson said. “I think it’ll be a great club and I’m super excited about it and I think that other people will be too.”