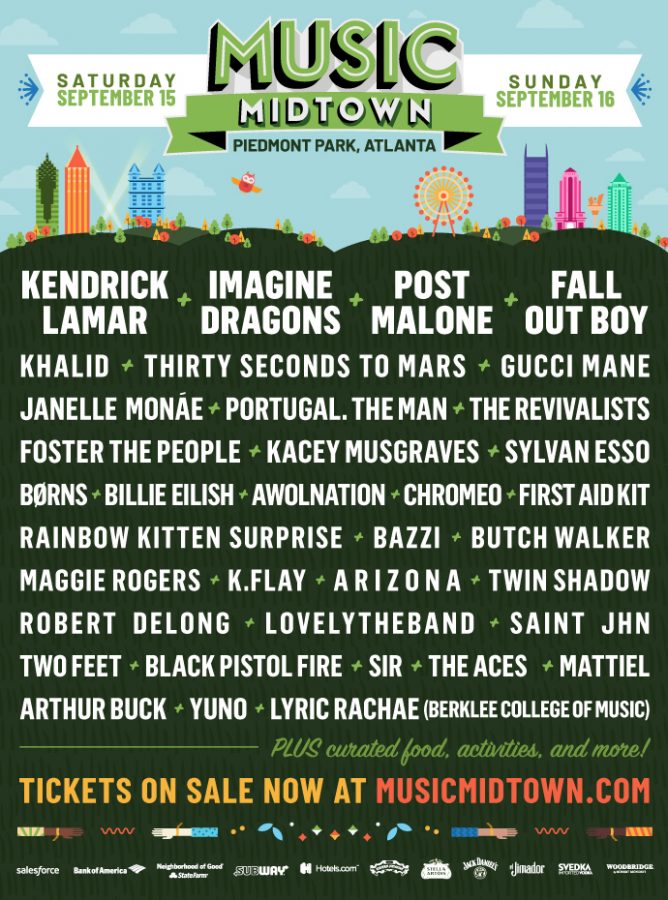 Music Midtown returns to Piedmont Park on Sept. 15-16. Here is the line-up and a preview of some of the acts coming this year.

20-year-old singer Khalid rose to popularity in 2017 after the release of his debut album, “American Teen”. Since then, he has collaborated with artists such as Kendrick Lamar, Logic, Lorde, SZA and Post Malone. He was also featured in the “Black Panther” soundtrack.

In 2015, a tour bus crash left the George Lewis Jr., the musician behind Twin Shadow, in need of hand surgery. Lewis recovered, and is now creating new music in his signature synth-pop style. Lewis’s music tackles themes such as relationship issues, masculinity and identity. His new album, “Caer,” was released this year.

The Swedish band is made up of two sisters, Klara and Johanna Soderberg. In 2008 the sisters rose to international fame after their YouTube video cover of Fleet Foxes’ song “Tiger Mountain Peasant Song” went viral. Since then, the folk music duo has become universally recognized.

The 16-year-old American singer-songwriter became well-known when her debut single “Ocean Eyes” went viral on SoundCloud in 2016. Billie and her brother, Finneas O’Connell, co-write her music, such as singles “Six Feet Under” and “Copycat.” Eilish released her album “Don’t Smile at Me” in 2017 and produced singles for the “13 Reasons Why” soundtrack.

Go to sleep early and rest up, you are going to be exhausted after the first day
Shower after
DRINK WATER, you need to stay hydrated; bring water with you

Bring a Portable charger
Music Midtown has bad reception, so try to send all important texts before you arrive

Stay hydrated because you’ll get more dehydrated than you think
Keep your phone next to you at all times, phones are commonly stolen
Go around and see different bands, immerse yourself in the experience
Be safe and smart
Take refresher breaks when you have the time
Remember to eat
Stick with people you know; pick a meeting point for you and your friends.
Have fun!