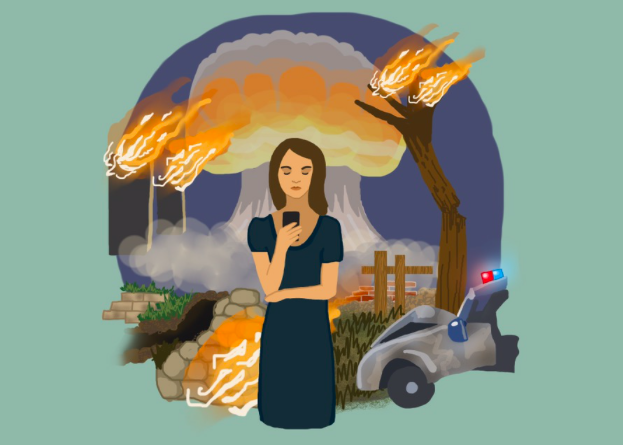 A girl is distracted by her phone as chaos ensues around her.

Before the bell rings for second period, junior Emily Schulz slides her phone into the pocket of a repurposed shoe hanger in her English class. As other students file in, they do the same, placing their devices in their assigned pocket.

Giving up one’s phone is now required in AP Literature teacher Lisa Willoughby’s classes. After noticing their distracting capabilities over the last few years, she finally decided to try out “something different.” Her policy seeks to keep students focused.

“I think it’s an itch that students and adults can’t not scratch,” Willoughby said. “It’s so demanding; it’s become so much a part of our lives, that when that ping happens, when that notification comes up, it’s just overwhelming, the need that kids feel to check it.”

Willoughby is not the only teacher with such a policy. Some teachers choose to collect phones before assessments. Others have an “I see it, I take it” policy. Math teacher Carrie Rowe has her students place their phones in their backpacks, which are kept against the wall of the classroom for the period.

According to the Atlanta Public Schools student handbook, the use of cell phones is prohibited for “all students at all times” during the school day. Principal Dr. Betsy Bockman adapts this rule to allow for phone use during lunch and for “instructional purposes.” Prohibiting them the rest of the day is challenging, but necessary.

“Some kids can handle it, and some can’t,” Dr. Bockman said.

Instead of taking notes or listening to lectures, smartphones allow students to disappear into their “own bubble,” Lee Pope, history and theater teacher, said. Some use them to watch Netflix, scroll through Instagram, or play the video game “Fortnite.”

“I think to some extent, they’re breeding a culture, in general, that needs constant entertainment,” said Willoughby, who has taught at Grady for 34 years. “Students are not as good as they once were at being self-directed.”

Research shows that overuse of phones can result in symptoms similar to addictions recognized by the American Psychological Association. An addiction is defined as a “chronic disease” that causes people to abuse a substance or behavior.

“I think that in terms of school, my phone does negatively affect me because I use my phone a lot in class when I should be paying attention,” senior Nell Krop said.

Cheating is also made easier with smartphones. Group chats, often created with the app GroupMe, can disperse test questions and homework answers to hundreds of students almost immediately. They are also used to research information and answers discreetly during tests and quizzes.

“I have been burned every which way with kids using phones to cheat,” Willoughby said.

Social media, which many teens access regularly with their phones, presents another problem. It makes it difficult for them to disconnect from their school life.

“Kids can’t ever escape it,” Willoughby said. “They take that bullying and drama with them everywhere they go, and I worry about the impact that has on young people and their mental health.”

Junior Mia Prausnitz-Weinbaum spent last semester at Outdoor Academy, a wilderness boarding school in the Pisgah Forest, where she lived without a phone for five months. The experience was a positive one, made better by being without a phone, she said.

“You just didn’t need it,” Prausnitz-Weinbaum said. “If you needed to look something up, you just asked someone or looked in a book. Everyone you wanted to talk to was right next to you anyway.”

But her experience was unique. In the regular world, people are expected to stay connected, and phones are needed to do so. They are useful for staying in touch with friends via social media, keeping up to date with the news, researching information and for school work with apps like Google Classroom.

“The negatives and how they impact learning are just things we need to work on,” music teacher Kevin Hill said. “Ultimately, the cell phone is an amazing tool.”