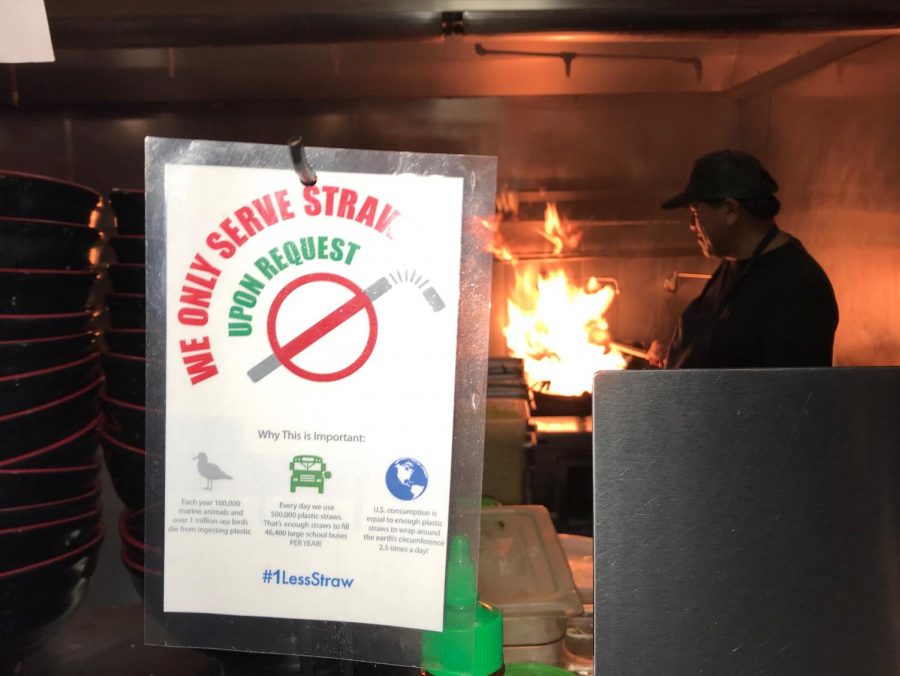 At Doc Chey’s Noodle House, junior Caroline Garvey serves a family drinks. She instinctively reaches into her pocket and lays out straws on the table. Garvey hesitates on her way back to the kitchen, recognizing her mistake. She immediately apologizes, quickly swiping up the straws.

Garvey has been trying to break this habit, which wasn’t problematic until just recently. Now, Doc Chey’s waiters can only serve paper straws, and only upon request.

Ever since a video taken by marine biologist Christine Figgener went viral last year on Youtube of a sea turtle with a straw stuck in its nose that had to be surgically removed, people have become more aware of the negative impact of straws in our oceans.

According to For a Strawless Ocean Organization, straws get into the ocean from waste being left on beaches and trash cans being blown over. Gutters and storm drains lead to the ocean, meaning all straws and plastic waste in our streets following that path end up there as well.

In response to public pressure, cities and businesses are banning or limiting the use of plastic straws. According to the New York Times, the hospitality industry is realizing that these single-use products probably damage the environment more than they are worth in convenience. NPR reported that organizations such as Starbucks, Ikea, and even the country of Scotland are all banning or phasing out plastic straws, suggesting that this is the beginning to an international movement.

Restaurants throughout Grady’s district, such as Osteria, Fritti, Doc Chey’s, Goin’ Coastal, and MetroFresh are joining in the national straw ban efforts.

Each has their own approach. Osteria, Doc Chey’s, and Goin’ Coastal only serve customers straws upon request, while Fritti has shifted to biodegradable, paper straws.

Mitchell Anderson, founder and owner of MetroFresh, is a long-time advocate for restaurant sustainability.

“I have hated using straws for years,” Anderson said. “I never understand why someone who gets a glass of water needs a straw.”

Restaurants are changing their business practices to make other changes as well. Some restaurants such as MetroFresh compost their organic waste, which is an expensive option but keeps some garbage out of the landfill. Anderson estimates that composting costs the business over $3,000 per year. Although it’s not profitable, he feels it’s worth it.

“I am more than happy to do what I can to help the environment,” Anderson said. “So overall, I don’t feel like there is a net negative effect on the business. In some ways, there is a positive impact on customer loyalty and appreciation.”

Some restaurants have adopted more environmentally-friendly to-go boxes. They are trying to switch from materials such as styrofoam to compostable containers when possible. However, Anderson said the convenience and cheap price of plastic flatware is tempting. The simplest solution might be sticking with regular silverware, but there is a higher cost associated with washing dishes and frequent to-go orders make disposable flatware much more convenient.

Although it is more work and money for restaurants, customers have had a positive response to this environmental-friendly movement. Garvey thinks this movement is beneficial.

“I think a lot of people have only really given positive feedback,” Garvey said. “Customers are more excited and proud of what we are doing than anything else.”

Garvey has not had a customer complain about the straws. In fact, some customers have brought in their own metal straws to use instead of paper straws offered by Doc Chey’s.

Junior Kasey Bandrowski, who works at Fritti, notices some customers are doing the same thing.

“I don’t think switching to paper straws will negatively affect our business in any way,” Bandrowski said. “Instead, people are more appreciative that we are making an effort to save the environment.”

“This is definitely just a beginning step to fix pollution in our environment,” Miller said. “There’s so much more we could be doing, but straws are just the first step.”

For Anderson, it’s all about helping the environment and leaving behind as little waste as possible.

“I believe every step is important,” Anderson said. “Every time we think about not using straws, plastic grocery bags, or recycling, we’re making a difference. By focusing on smaller issues on which you can have an impact, you are participating in a much larger solution to a much larger problem.”