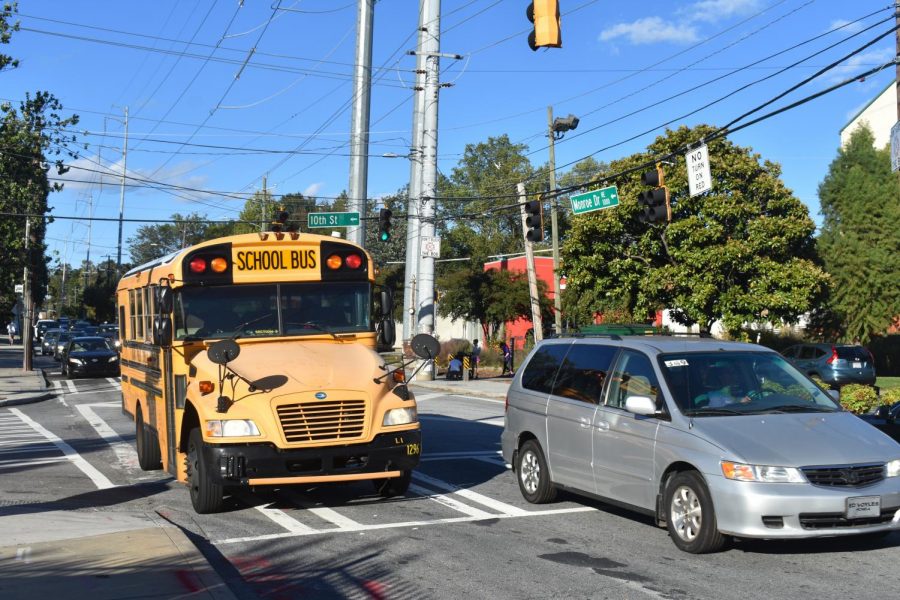 The traffic on 10th and Monroe has proven hazardous for students walking to and from school.

Every day at 3:30 p.m., after the chime of the bell, students swarm out of Grady. Some make their way to their cars, while others bike or walk.

Grady is fortunate to be within close proximity to walkable and bikeable infrastructures such as Piedmont Park, the Beltline, and the Tenth Street bike lanes, but accessibility to all of these locations is limited by the difficulty of to crossing Tenth Street.

At 8:30 a.m. on an average weekday, Tenth Street processes about 1100 cars per hour. Later in the afternoon, at around 3:30 p.m., the count is a bit lower at just under 1,000 cars an hour. Because of the traffic, many Grady students find it more convenient to jaywalk across Tenth to access Piedmont Park and the bike lane, rather than encounter the notoriously long, safer, signals at Monroe and Charles Allen.

This endangers students and causes a disturbance in car traffic along Tenth Street and around the exit of the Grady parking lot.

The High-Intensity Activated Crosswalk Beacon, or the HAWK, is a pedestrian signal system that allows pedestrians to activate a traffic signal, stopping traffic and allowing them to cross safely. HAWKs have been popping up all over Atlanta, including Buford Highway, Monroe Drive, up and down the Beltline and, notably, up Tenth Street.

In 2016, freshman Alexia Hyneman lost her life after being hit by a car while riding her bike across Monroe and Tenth. The driver of the car said that she darted into traffic and he didn’t see her. A HAWK could prevent accidents like these by increasing the visibility of pedestrians and bikers as well as preventing students from jaywalking.