Proposed Monroe and 10th development shut down by city 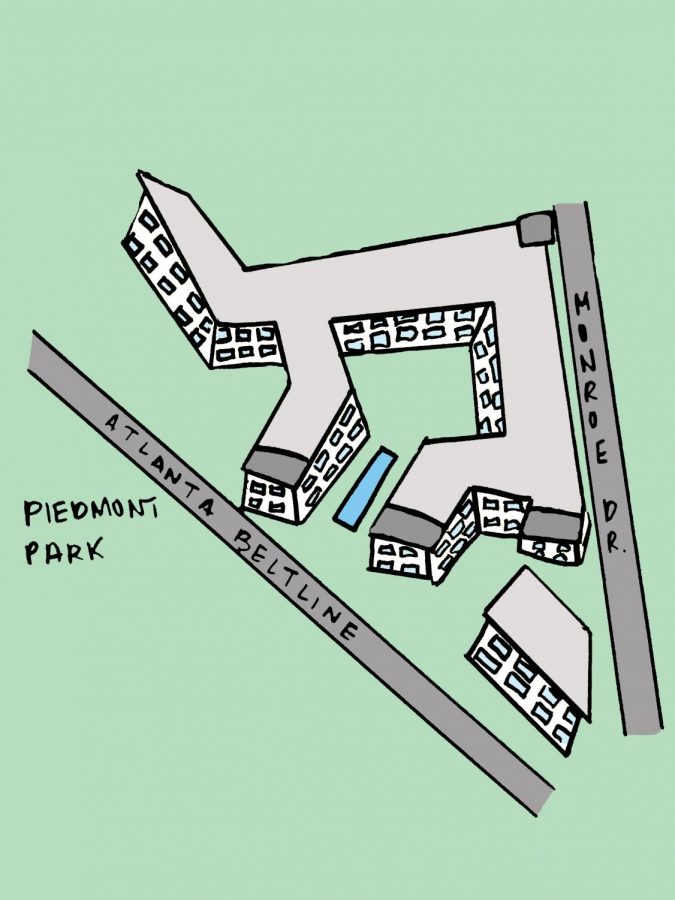 A rendering of the proposed development. The development would of been between the Atlanta Beltline and Monroe Dr., next to Piedmont Park.

The blaring sound of skidding tires against the street is  typical for Grady students who regularly cross the intersection of Monroe Drive and 10th Street. This busy intersection is a dangerous game for many. Due to this concern, among others, a proposed multi-story development at the corner of this intersection is put on hold  by the city.

The project ceased to continue on July 4 when the Atlanta BeltLine stopped selling the land to Fuqua Development, the company in charge of the project. Many community members and organizations opposed the project, which would have included apartments, a hotel, shops and a grocery store. One opposer was APS District 3 representative Michelle Olympiadis.

“While it is great to have amenities on the BeltLine, this project was very large and included an apartment high rise and boutique hotel in its plans,” Olympiadis said. “While the developer believed there would be little impact to the community and schools, we know that apartments in the Grady cluster are coveted places for families wanting to attend Grady schools and that many road calming initiatives have been implemented at 10th and Monroe to manage the current vehicle and pedestrian congestion.”

The 10th Street and Monroe Drive intersection feeds into the BeltLine, where students often bike and walk to school. Students who walk to school cross the street here and students who drive to school are at the light waiting to turn on this street. This is not to mention the numerous amount of people traveling up and down 10th St. to get to work. Sophomore MacKenzie York sees this every day while walking to and from school.

“Crossing the 10th Street and Monroe crosswalk is dangerous even if you are paying attention,” York said. “From my experience, it is much more chaotic at the end of the day, when drivers are impatient and exhausted. Adding this development would have brought a lot more disruptions to the flow of traffic, thus making it harder to cross the crosswalk.”

The development also brought up many environmental concerns due to its close proximity to Piedmont Park, one of the city’s largest green spaces. Grady environmental science teacher, Elizabeth Yale, recognized this potential problem, and last year spent six weeks with her students researching the impacts of a development this large.

“Right now, on average, there are about 14,000 cars that drive by 10th St. a day, and they [Fuqua Developments] were looking to put a parking garage to house almost 1,000 cars,” Yale said. “It would of been a significant increase in air pollution, noise pollution, and even just the construction part of it. There is a environmental impact of taking out part of our green space, trees, and animals. Piedmont Park has 115 different species of trees, so I think we need to make an effort to preserve them.”

Additionally, the apartments in the development would have brought more students to Grady, which is already crowded.

“The increased density would need to be addressed from all aspects – roads, pedestrians, the BeltLine,” Olympiadis said. “The potential for increased student enrollment in the Grady cluster and its many schools that are currently over capacity would directly impact us.”

The project was opposed by many, but for Fuqua Developments, the goal was to benefit the community by adding amenities to the Atlanta BeltLine. They even complied with city concerns of affordable housing, so the plans included 30% affordable housing, and was approved by the city of Atlanta. When the city abruptly halted the sale of land, Fuqua was “shocked and stunned”. However, the consensus was that the project was not the right fit.

“It’s always important to understand development in the areas you represent and throughout the city and metro area,” Olympiadis said. “You want to make sure that the community’s voice is being heard and that consensus is being built to move the right work forward.”

While the intentions for this project were good, the community and the city agreed that it was not the best for the area. As Yale said, “the benefits would have not outweighed the negative.”