The Southerner’s response to attacks on the news media 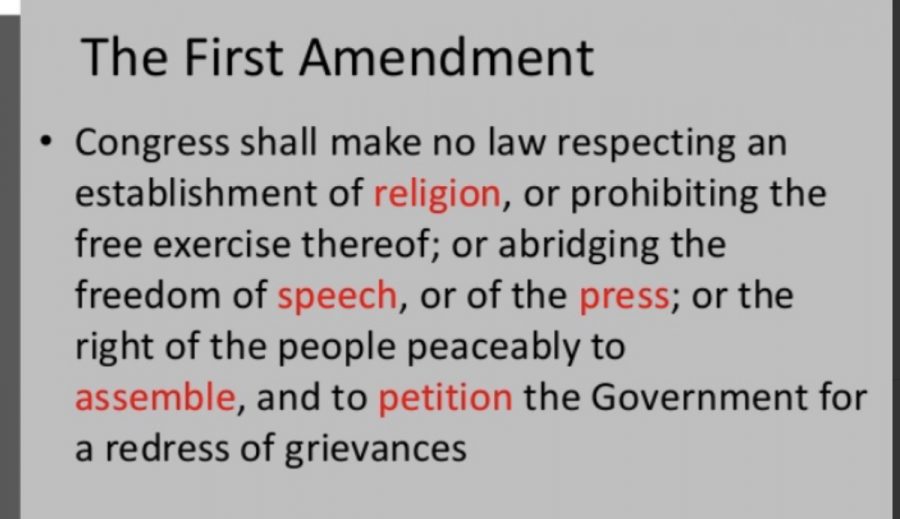 The First Amendment of the U.S. Constitution.

In accordance with the Boston Globe’s proposal, the Southerner is taking part in a coordinated editorial response to the ongoing attacks on the press by President Donald Trump.

A cognizant nation capable of making intelligent decisions begins with unlimited access to honest information by way of the press. In the democratic system of holding the government accountable for its actions, the ability to access independent news outlets is critical to the integrity of our nation. News outlets are the only way individuals can be exposed to the status of the government. With the President of the United States publicly discrediting the idea of the free press, these foundational necessities are compromised.

President Trump is quoted saying, “It is frankly disgusting the way the press is able to write whatever they want to write,” and he has referred to the press as reporting “fake news” and as “the enemy of the people.”

Controversial news is not the enemy of the people. All stories that are relevant to the people need to be reported on, regardless of how they are perceived by each individual.

Unbiased reporting is not the enemy of the people. Most journalists strive to deliver the news to consumers free of personal opinions and viewpoints, and the President’s attempts to suppress facts  are a direct way of manipulating the views of the population.

Investigative journalism is not the enemy of the people. The freedom of the press is necessary due to its ability to criticize and oppose the actions of high-profile figures.

Those who denounce the integrity of writers are the enemy of the people. When someone with a national presence intentionally cripples the honest reputation of all journalists, then trust is difficult to restore.

Those who silence political viewpoints are the enemy of the people. Every political stance is relevant and necessary to assemble a democracy.

Those who condemn the truth are the enemy of the people. By shaming the entire journalism sector, individuals can create a sense of fear and distrust between the people and the journalists.

Even at Grady High School, there is a disconnect between the student body and the writers of the school newspaper. The newspaper is not seen by all students as a legitimate source of news, and President Trump has become a catalyst for a severe distrust of the press that could potentially spread to the high school level. The power of student-generated media must not be overlooked, especially since it represents a voice that otherwise may not be heard.

We the people hold the power in the political system only if we are informed enough to make intelligent decisions and take well-versed stances. The media is a vital presence in the people’s ability to hold the government accountable. The existence of the press is the only applicable method for the people of the United States to live in the free nation everyone so desires.