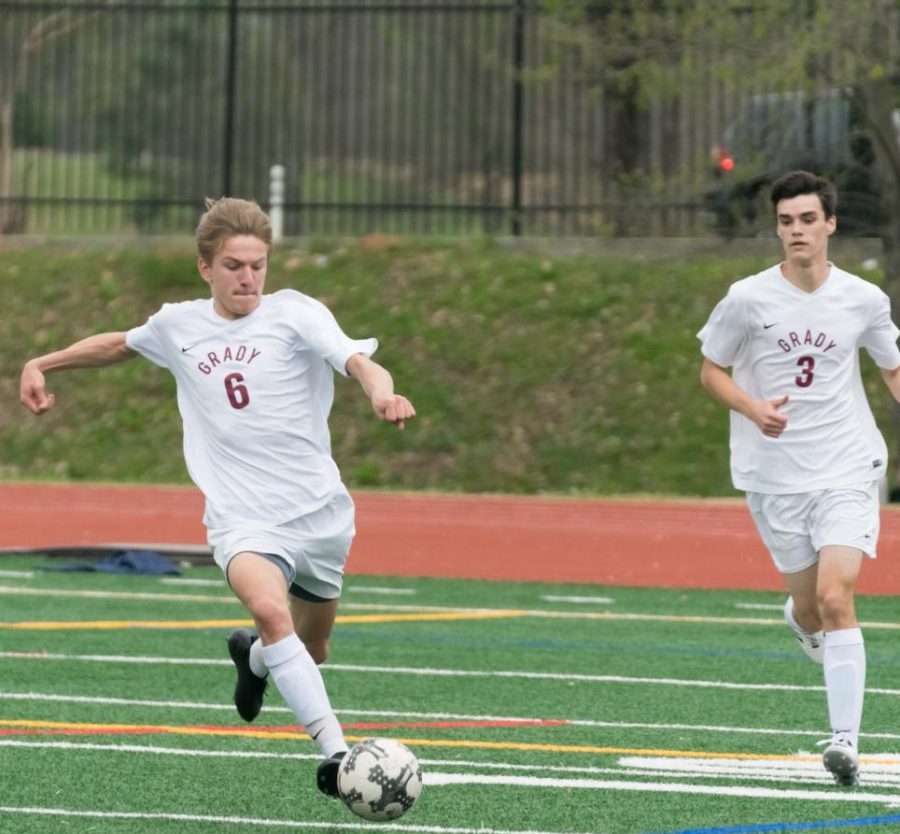 The Grady boys soccer team finished 5-2 in the region, qualifying for fourth place and a spot in the state tournament.

After a series of mercy rule victories early in region play to start 6-0-2 with a No. 8 ranking in Class 5A by MaxPreps, the Knights lost 4-1 to North Springs after senior goalkeeper Jack Hudson was handed an early red card for a slide tackle in the box. Grady then lost to No. 2 Decatur 13-12 in penalties after an extra time thriller in which Decatur scored early in extra time but junior defender Nicho Cucchi equalized the score at 1-1 on a last-minute header to force penalties.

The red card might have changed the course of two games, as Hudson was sidelined in the game against Decatur due to it, but players are determined to not let one play ruin an otherwise smooth-sailing season.

“We won’t let one call change our season,” senior captain Caleb Weinstock said. “We will rebound.”

After these two losses, Grady was tied with Lithia Springs for the fourth and final playoff spot, making the last two region games ever so crucial. Coaches pushed a message of confidence to the team heading into its final region games.

“The [last] two [region] games are critical to us securing a spot in the state tournament,” coach Nikolai Curtis said. “The team knew that if we lost we’re looking at possibly not making the playoffs. Second, is understanding that they have the ability to win these games. We are clearly one of the top teams in the state, but our production is not reflecting that statement. I believe they were pushing each other to make sure we end up with a spot in the tournament as it would be a major letdown for them personally.”

Grady went through a similar situation last year, as they finished fourth in the region for the final playoff spot before a run to the semifinals. Curtis believes this experience helps the team in their similar scenario this year.

“Last year’s placement helped us because the players understand the pressure that they are now facing this week,” Curtis said. “They handled it well last year. We were also aware of what needed to be done to secure a spot in the playoffs.”

The Knights traveled west on I-20 to Lithia Springs on Mar. 26 and won 4-0 to break the tie in the standings and secure a playoff spot.

“It was tough at some points of the qualification. Everything became hard for us,” senior midfielder Mateo Garcia said. “We suffered some losses that cost a lot, but we had enough talent and passion to face it and we made it.”

After this victory, Grady kept its momentum with a 1-0 win against Riverwood on Mar. 29 to secure a fourth place finish in the region. With region play over, players focused on the postseason.

“Now we have to focus in the next few weeks to achieve our goal,” Garcia said.

After region play concluded, Grady faced Lakeside, Druid Hills and Carrollton. The game against Lakeside ended in a 0-0 draw after the lights went out late in the first half and could not be turned back on. As this was a non-region game, a makeup game will not happen. In the state tournament the Knights will face Cross Keys, which is 15-1 overall and 7-0 in their region.

“We know the playoffs are going to be hard,” Garcia said. “The teams are all pretty good but we have all that we need to win the state championship.”