‘Love Simon’ offers a teen perspective on coming out 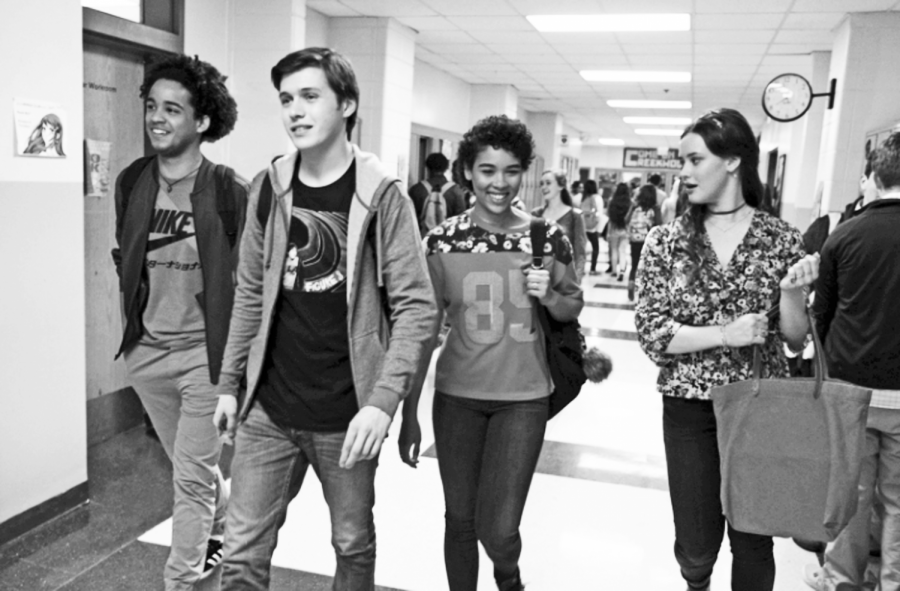 When does one come out as heterosexual?

That’s one of the questions the new film “Love, Simon” asks viewers to consider after showing a montage of straight teenagers revealing their sexualities to their families. Why do only gay people have to declare their sexualities?

Filmed within Grady’s walls and stadium (though the outdoor shots were filmed at Atlanta International School), “Love, Simon” follows the senior year of the main character, Simon (Nick Robinson), and his struggle to come out as gay. It’s not so much that he is afraid of coming out as he is annoyed at the need to do so. However, everything changes when he falls in love with an anonymous classmate who came out online under the pseudonym “Blue.” Another student, Martin (Logan Miller), uses this information to blackmail Simon into setting him up with his friend. The film is based on the book “Simon vs. the Homo Sapiens Agenda” by Becky Albertalli.

“Love, Simon” is notable for the fact that it’s one of the first movies that features gay characters without the backdrop of some overarching struggle that affects the LGBTQ community. The majority of films with gay lead characters are masked by the AIDS struggle or the fight for gay rights. Don’t get me wrong — those movies are extremely important — but if Hollywood only portrays homosexual relationships as fraught with some sort of conflict, they will never be normalized as the same romance that heterosexual couples experience in the eyes of the audience.

2017’s “Call Me by Your Name” achieved portraying gay love simply as that, love — not a societal conflict, but in indie-drama form. “Love, Simon” does in the form of a wide-appealing romantic-comedy. Simon tells us this in the film, “I’m done living in a world where I don’t get to be who I am. I deserve a great love story.” “Love, Simon” is welcoming a new age of Hollywood where rom-coms will speak to more than just Ryan Gosling lovers and white, heterosexual couples.

“Love, Simon” takes place in an idyllic, upper middle class neighborhood reminiscent of the Morningside area (it was filmed in a similar neighborhood in Atlanta). Simon’s parents are liberal-minded, accepting and supportive of him. Yet, even in this almost perfect lifestyle, coming out still isn’t easy. It’s an important reminder that even in a relatively accepting community like Midtown Atlanta, revealing his your sexuality to the world is still a challenge for Simon.

The movie also touches on how often times, all gay men are assumed to have more traditionally feminine interests and mannerisms, which makes it harder for a less stereotypical gay man like Simon to come out. Simon tells us, “I’m just like you,” in the first few minutes of the film. That’s true. He acts and looks and dresses like every other heterosexual boy in the school. The one openly homosexual boy in his school is more reminiscent of the stereotype of gay men.

Part of why Simon is hesitant to come out is that he doesn’t want people to assume his personality and interests are different because of his sexuality (as shown in a particularly funny montage in the film). In this way, “Love, Simon” reminds its audience that by associating homosexuality with acting one way or another, we make it harder for people to come out.

Though at times it feels slightly cheesy, as all rom-coms do, “Love, Simon” is powered by sensitive performances and stellar comic relief. Some of the characters could have been more developed, including Leah (Katherine Langford), Simon’s best friend who had an unfinished character arc, but the power of Simon’s character makes it a movie I’m glad to see join the list of classic teen movies.

When I saw “Love, Simon” in theaters, the room was filled with gay couples in their 30s and 40s. This is the love story they never got to see in their high school years. Hopefully, Hollywood will follow this film’s footsteps and give all audiences the love stories they deserve.