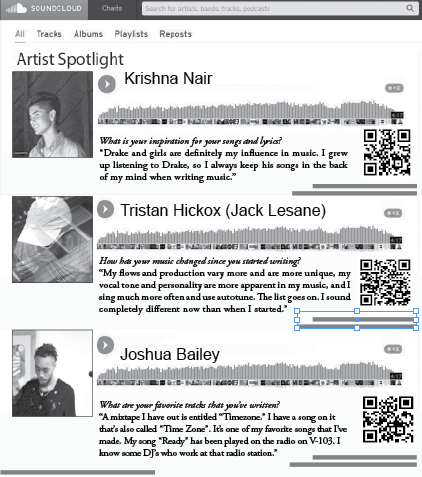 In our day and age, technology is the platform not only used to communicate words and ideas, but to share talents, media and entertainment.

Multiple students in each grade at Grady are well known on the SoundCloud app, where they can record, produce and upload their own music for anyone who has the app. These students have used their ability to reach listeners through a love for the art and possibly setting the path for a future career.

“My motivation for starting music was seeing the pleasure and joy music provides to people,” sophomore Krishna Nair said. “Drake was definitely my inspiration. He provides a range of emotion that I hope to create with my music.”

Nair has been rapping for three years, and currently uses the name Kn2Fly for his music. Senior Tristan Hickox, who goes by “Jack Lesane” in the music world, has been rapping  more years than Nair, uses social media to share his music with a variety of  audiences. Inspired by Tupac, Young Thug and many others, Hickox originally started writing and rapping when his dog passed away about five years ago.

“I use a distribution service to get my music on all platforms and promote using as many types of social media as possible,” Hickox said. “I also have live shows and try to have promotions here and there, along with word of mouth.”

Nair said he has yet to try promotional companies, but contemplates the idea of it for the future. Both Nair and Hickox are motivated to make music, and they thrive on the reactions of listeners and people who appreciate the message they are sharing through music.

“I like the attention rapping brings to my persona,” Nair said. “It brings me pride when someone quotes a Kn2Fly lyric, or tells me they have heard my latest track.”

Hickox also enjoys the attention, but loves the act of producing music and the entire process as a whole.

“My favorite thing about rapping is probably just the feeling I get when I come up with a clever metaphor or rhyme, or when I’m in the booth freestyling and just start going off,” Hickox said. It’s like, for a brief second, you’re on the top of the world and nothing else matters. There’s a lot of special little moments like that during the creative process, not to mention live shows.”

Hickox said he appreciates having a musical following, but recognizes his music is not for everyone.

“Having people listen to me is kind of surreal. It’s a struggle getting people to open their mind, but when you do, it’s an amazing feeling,” Hickox added.  “There’s nothing more rewarding than seeing someone with a genuine love for your art.”

Joshua Bailey, another Grady senior who has been on the rap scene for multiple years, has a large following on SoundCloud and strives for as many live performances as possible just as Hickox and Nair do. Bailey tries his best to deliver a “positive and intellectual message” in his music, as he notes that his approach to life and music are the same.

Bailey had his first live performance at Center Stage in Midtown, and did the rest with the Sofarsounds organization.

“One of Joshua’s songs motivated me when I listened to it,” senior Aaron Burras said. “It talks about always being ready, and this year I think that applies to a lot of us and we always need to be ready when we’re going on to the next stage of our lives.”

Like many fanciful artists, Bailey strives to create conversation.

“I want people to listen,” Bailey said. “There’s a quote that I’m thinking of, it says ‘Music expresses what has to be said and what you can’t be taught, or something like that. I guess it’s a way that I express myself.”

Bailey derives this call to communicate from influential singers throughout history and genres.

All three young musicians hope to have rap as a constant in their future plans.

“As artists, we really do have to dedicate ourselves and put all of our time into perfecting our crafts, so when people appreciate it, it really means something to us. Or at least it means a lot to me,” Hickox said.