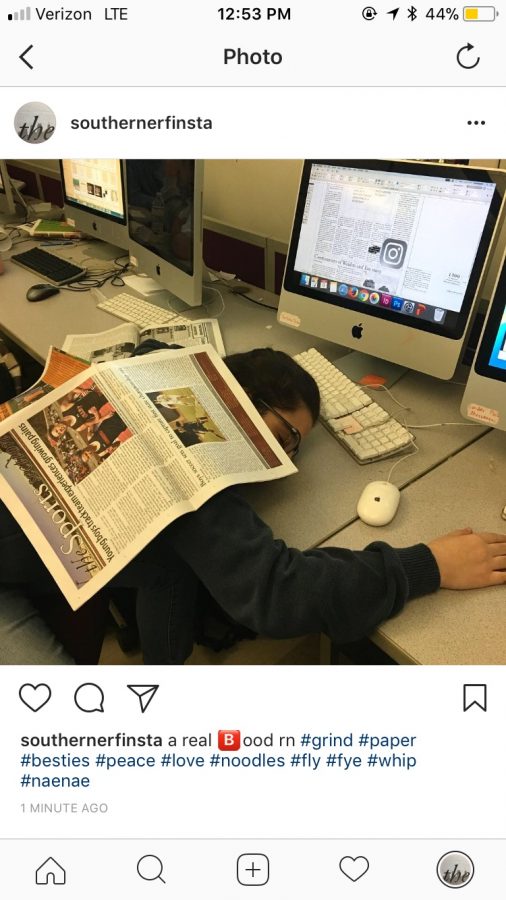 KEEPING UP WITH MULTIPLE IDENTITIES: Because teenagers feel pressured to maintain a certain image or reputation on Instagram, they often make a second account dubbed a "finsta," short for a "fake-instagram."

You’ve scrolled through it. You’ve double tapped, left a comment, saved to a collection. You’ve probably posted a picture here and there. Most American teens are familiar with the social media app Instagram, which allows users to share pictures for the public to see. But some act as more than the average user, taking the platform to a new level. Sophomore Hailey Larkins is in this category.

“I was like, ‘I have a problem,’” Larkins said laughingly, describing her reaction when she discovered she’d spent quite an excessive amount of time on the app a certain week.

For Larkins, Instagram isn’t just a way to share experiences or selfies with her friends. It’s her hobby. She puts time and effort into each and every post she shares. That means planning a picture, editing it with one of her six different editing apps and complementing it with a witty caption.

“It’s kind of a cool platform where you can just express yourself artistically,” Larkins said.

Larkins was inspired by the many bloggers and models on the platform who spend time curating the perfect “feed,” the ever-updating string of pictures shared by a user. But she was also influenced by her friend, sophomore Camisha Smith, who developed an interest in social media through her church’s advertising team.

“It started becoming a hobby where I would find other people’s pictures and get inspired by it, and I would either try to recreate it or figure out how I could make it my own,” Smith said.

“She was saying how in high school she was bullied and how she felt like life was horrible, so she would express herself through creative things,” Larkins said. “She decided to do Instagram and to start a YouTube channel, and it helped her get through that hard time.”

But not all users send positive messages, according to Larkins. Hundreds of golden, seemingly clear-skinned, uber-thin models flood the platform, enforcing unrealistic ideals for how young women should look.

“Some of these [editing] apps can make you look entirely different than how you actually look,” Larkins said. “It’s just like how fashion magazines and fashion models — how they used to be super skinny and girls would look at it and ask, ‘Why don’t I look like that? Why are they so skinny and I’m not?’”

Junior Margo Lyman, who has three Instagram accounts, one with more than 1,300 followers, notices this pattern as well. She also points out that such pressure doesn’t just affect girls, but boys, too.

“It’s the same as at school,” freshman Nicholas Kamel said. “You have an image of yourself to maintain, and that’s not necessarily a bad thing.”

Despite this fact, the platform has seen the rise of a counterculture, one which praises the unique individual.

“There are a lot of people on Instagram that are like, ‘This is the standard of beauty,’” Smith said. “But it’s also a whole side of Instagram where it’s evolving to ‘Be you, be unique.’”

Another side of Instagram revokes the idea of a pretty and pristine profile altogether and instead focuses on humor, often to be shared only with one’s closest friends. Finstas, or “fake Instagrams,” serve this purpose.

“I think there is a lot of pressure on main accounts for that, and I think that’s the reason that people really like their finstas,” Lyman said.

Lyman started @_h2_ho, a finsta where she shares memes, pictures and videos about people drinking water, calling herself  “a serious advocate for hydration.”

According to Lyman, Snapchat is similarly relaxed, because posts disappear after 24 hours and users have no way of viewing comments or likes on others’ posts.

For some, Instagram is just a waste of time. Senior Dhruv Mehra deleted his account sophomore year when he realized he was “wasting so much time just looking at random endless content” and only got it back recently, after finishing his college applications. Kamel said he felt as if time wasn’t passing when he scrolled through the app.

But for Smith, the prospect of a career is at the end of all their time spent on Instagram. Smith developed an interest in graphic design and social media. Larkins is interested as well but thinks it may be unrealistic as a career choice.

“There are probably hundreds of thousands of girls like me who want to have a career in social media, and probably only half of them —less than that — are going to actually make it,” Larkins said.

Regardless, Instagram remains a way for people all over the globe to stay connected and discover people and ideas that exist throughout the world.

“But that’s why I also like social media,” Larkins said. “Because it’s such a big form that really anyone can have a following, as long as people have interest in what you’re doing.”