the Southerner Online • May 5, 2018 • https://thesoutherneronline.com/66751/lifestyle/ellerton-pushes-students-athletes-to-work-hard/ 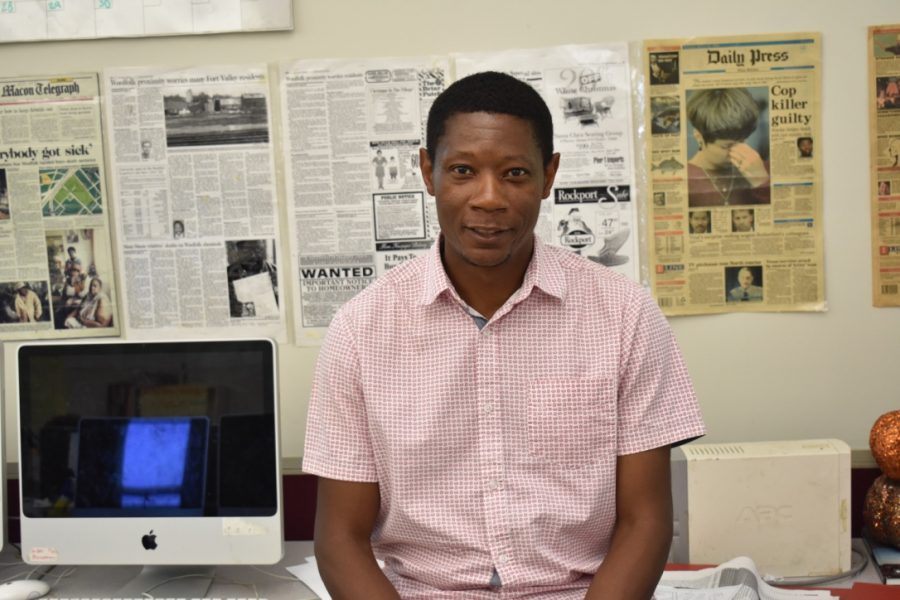 IN HIS ELEMENT: Journalism adviser Del Ellerton sits in the journalism classroom surrounded by examples of newspapers from his years of experience as a writer. Ellerton was a writer for the Macon Telegraph, the Daily Press, the Atlanta Journal-Constitution and Bloomberg News for 10 years.

Hard work and discipline were something Grady’s journalism teacher and track coach Delbert Ellerton learned at an early age.

“I grew up initially in Mississippi,” Ellerton said. “We really didn’t have anything. I stayed with my grandparents up until I was third grade. My granddad basically worked in the fields in the summer driving tractors. Even as kids, a lot of times, we were working in the fields, with the grown folks, for $15 a day out there in the hot sun from the moment the sun was up in the morning to when it was dark in the afternoon. So for me, hard work has always been ingrained in me.”

That’s the same kind of work ethic and attention to detail Ellerton has tried to get from his students and athletes.

“The whole thing about [coaching] track and teaching journalism and the work that you do — it’s tangible, and it’s making a real difference for other people,” Ellerton said. “That’s the most gratifying thing about it all.”

However, it hasn’t come easily.

Ellerton, a 1987 Grady graduate, is one of the hardest-working teachers at the school, according to many of his students. Two weeks each month, he’s at the school until 10 p.m. working on the publications.

Sitting behind a tall Mac computer everyday while his students type articles or work on pages of the newspaper, Ellerton meticulously looks through each story and photograph to be published, striking through words or penning suggestions in his recognizable red ink. Throughout the class, his students come up to him, asking for advice on their writing or for an alternative perspective for newspaper design elements.

Later in his day, Ellerton makes the short trek from his classroom on the E100 hall into Grady Stadium. Since 2004, Ellerton has been the boy’s track and field head coach and has guided the team to win four straight region championships, six city championships and runner-up and two third-place finishes for the state championship.

“He pours himself into what he loves, journalism and track, and is willing to quietly work at it year after year to get excellence from the students he advises or coaches,” said Riki Bolster, a former adviser to the Southerner and Elleton’s journalism teacher at Grady.

Ellerton has been passionate about track and journalism most of his life. As a student at Grady, Ellerton was in the communications magnet program and ran track all four years, played football his freshman, sophomore and senior years and ran cross country his junior year.

“He was a leader in the fact that he was a vocal leader who’s kind of soft-spoken,” said Bobby Brewington, Ellerton’s track coach at Grady. “He’d express his mind, now don’t get me wrong, in certain groups, smaller groups. He was the sort of person that lead by example.”

In his senior year, Ellerton had a severe hamstring injury, but qualified for the state championships in the 300 meter hurdles. As an athlete, Ellerton struggled with the team’s atmosphere and lack of motivation among his peer athletes.

“I don’t think the mentality was a winning mentality,” Ellerton said. “It is like, you go and you participate, but it wasn’t like they were expecting to win. It was a culture, that as an athlete, I really wanted to try to fix, if I could. You can’t, as one person, get everybody to buy into that.”

When Ellerton graduated Grady, he attended Paine College in Augusta, Ga. where he had a scholarship to run track, but left the night of his first day there because of the deaths of his 17-year-old brother and 22-year-old cousin. Ellerton, who also had a scholarship offer from Morehouse, then attended Howard University in Washington, D.C. but transferred after a semester to UGA because of his family situation. He suffered from injuries during his sophomore year and ran for a limited period as a walk-on during his senior year.

Although he majored in finance, Ellerton created a newsletter for African-American students to voice their concerns, and he also briefly wrote for the UGA paper, the Red & Black.

“I realized there was a whole lot of power in the written word, and that kind of propelled me to decide a year after I graduated ‘I’m going to go to journalism school,” Ellerton said.

From 2003 to 2007, Ellerton taught English at Turner Middle School after leaving journalism. From 2007 to 2015, he taught literature and journalism at Mays High School before becoming Grady’s journalism teacher during the fall of 2015. He became Grady’s boys head coach his first year as a teacher at Turner.

“I was so happy that he was available because he would always stress to his athletes that education comes first,” said Douglas Slade, Grady’s athletic director from 1988 to 2012. “As athletic director, I demand that of the staff. Of course all of us want to win, but it’s all about getting students ready for life and making sure we are a difference in their lives. He just was just a joy to be around. When I had an opportunity to add him on the staff, it just made the staff that much better.”

In his time teaching and coaching, Ellerton has not only taught lessons to his students and athletes, but has also learned and grown himself.

“I’ve learned from teaching that you need to be patient,” Ellerton said. “It takes a while. Sometimes it looks like students may not be getting it, or they are struggling, but they’re there. They’re paying attention. So a lot of times for students, it just takes a while, but they are listening, and you are influencing them whether you know it or not.”

After maintaining a close friendship with Ellerton for the past few decades, Brewington has not only seen Ellerton’s dedication to his commitments, but also the compassion he has for those he works with.

“The thing that sets him apart from a lot of people is the fact that he is very caring,” Brewington said. “He may not let onto it sometimes, but he’s very caring about people, and he’ll go the extra mile, whether it’s for an athlete or co-worker or friend or relative.”

In addition to his coaching and advising recognitions, Ellerton still competes in the USA Track and Field (USATF) Masters division and finished third in the long jump at the USATF Masters National Championship and first in Georgia in 2015.

Former Grady student and runner Calvin Colquitt has witnessed Ellerton’s commitment as a coach and continues to see it as a friend today.

“Track season ends in May, [and] my phone started ringing in June,” Colquitt said. “[Ellerton] was talking about what the possibilities for next spring [were]. We [had] these conversations, and he picked through the school in other sports [to recruit athletes]. He’s full time, [and] he’s fully dedicated.”

Since running for Grady in 1999 and 2000, Colquitt has noticed improvements in Ellerton’s coaching, citing a focus on a more comprehensive strategy that incorporates all track and field events to maximize points scored.

Grady boys track and field assistant coach Joshua Washington also ran for Ellerton at Grady from 2003-07 and admires his depth of knowledge in the sport.

“He just knows so much about the sport, and he knows so much about every individual event that you sometimes just simply have to be a sponge and soak in all the information and the knowledge that he has about track and field,” Washington said. “That has helped me as a coach, and that has helped me as I compete, as well, to make sure I’m always positioning myself to be the best athlete. A lot of that knowledge has come from [Ellerton].”

Similar to Ellerton’s athletes, his journalism students have recognized his passion and affinity for the subject.

“I saw his attention to detail,” said former Managing Editor and 2017 Grady Graduate Allie Schneider. “He was always very particular about how the newspaper went out. It can be annoying sometimes when you’re a high school student, and you don’t like being told ‘Go fix that one little mistake.’ You had printed that page like ten different times, and it’s like, ‘Isn’t it good enough?’ Once the paper comes out, you realize how much that matters.”

Southerner staffers have also admired specific journalistic skills that Ellerton tries to implement in the publication.

“He’s taught me when to fight for a story and when to let it go,” senior Katie Earles, co-Editor-in-Chief, said. “He’s encouraged us to be creative with design and layouts so we can have the aesthetic advantage of a news-magazine, while keeping the benefits of a newspaper.”

Senior Olivia Podber, co-Editor-in-Chief, has not only learned more about media publications but improved her leadership skills and personal integrity.

“Through the many hours each week I spend in the journalism room working on compiling the paper under Mr. Ellerton’s guidance, I’ve learned how to operate The Southerner like a ‘real newspaper,’” Podber said. “Mr. Ellerton has taught me how to become a leader, not only on the paper, but in other facets of my life, as well. He has taught me how to hold myself and others accountable, how to plan and execute a vision and how to feel confident in my own ideas.”

While some students and athletes can feel intimidated by Ellerton’s seriousness, Podber finds his dedication and humor to be desirable qualities that make him a successful leader.

“Mr. Ellerton is a teacher who effortlessly combines humor with sincerity, constantly asking about updates on the paper but in a comedic tone,” Podber said. “He doesn’t take himself too seriously, which is a quality I think most teachers and advisers lack, but one I genuinely respect in him. He is the most dedicated person on The Southerner staff, working until the last minute to ensure the paper prints without errors.”

On the field and in class, Ellerton strives to create a culture of excellence and often focuses on every detail to ensure perfection.

“Coach Ellerton doesn’t go easy on us and doesn’t unnecessarily boost our egos, so we always have improvement in mind,” said senior distance runner Aidan Goldston. “He also carefully plans out who is able to contribute to what [on] the team. That planning has gotten us four region championships in a row since I’ve been on the team and was especially critical in our last one.”