the Southerner Online • May 15, 2018 • https://thesoutherneronline.com/66737/sports/young-girls-soccer-team-makes-playoff-run/ 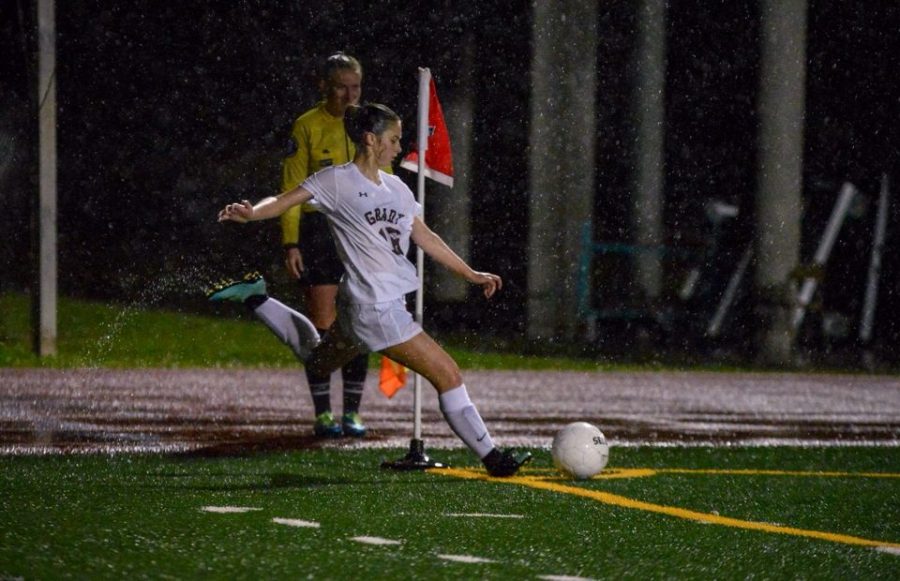 BRINGING ON THE STORM: Freshman defender Isabel Pruitt prepares to take a corner in a rainy game against Riverwood. The girls ended with a 1-0 loss to Carrollton in the playoffs.

The girls soccer team’s season was full of ups and very few downs this year, as it finished with a 12-4-2 record.

What began looking like a rebuilding year, with a team composed largely of underclassmen and not a single senior, turned into a very impressive season in the Region 6AAAA. Junior captain Anna Tischer was hopeful from the beginning of the year, expecting a strong season for the girls.

“I knew that it was going to be a good season because a lot of the freshmen were on highly-ranked club teams,” Tischer said. “We made it pretty far in school playoffs last season and had only lost three seniors, so, I knew that with the large amount of freshmen soccer players coming into Grady, we were going to do well this season, too.”

After tying their first game of the season 1-1 against North Atlanta, the girls won seven out of their next eight, including wins over Woodward, Pace, and Paideia. The initial expectations for the young team were high, with hopes for a deep playoff run.

With a new head coach, after former coach Rodney Thomas left to be come athletic director at Decatur, the girls had to adopt a new style of play to find success with a relatively new lineup. This season the most emphasis was on passing. Coaches Rich Bennett and Shalea Niles put a heavy emphasis on the importance of team play, and the results showed on the field.

“[Teamwork] was even more important; the team bonded really well,” Bennett said. “My philosophy was no individuals, so everyone really had to come together.”

As the girls developed better team chemistry, their games became increasingly dominant, allowing the team to win four games by the mercy rule. The girls faced a slight bump in the road however, as the team was plagued with injuries.

With a record of 6-2 in their region, junior captain Lena Brown had high hopes heading into the playoffs.

“I thought the chemistry was very good  from us heading into the playoffs,” Brown said.

In the next round of the playoffs, the girls faced  Carrollton, a  No. 1 seed. The Knights’ deep run hopes were cut short when the team lost 1-0. Though the season may have ended earlier than the team hoped next season semms promising.

With no seniors on the roster, the team could remain nearly identical next season. Tischer expressed her sadness for not going further in the playoffs, but has high hopes for next season.

“It was definitely disappointing that we didn’t make it as far as last year,” Tischer said, “But since we have no seniors on the team, no players are leaving, so the team is only going to grow bigger and better next year.”