the Southerner Online • May 20, 2018 • https://thesoutherneronline.com/66711/news/herrera-inducted-into-national-debate-hall-of-fame/ 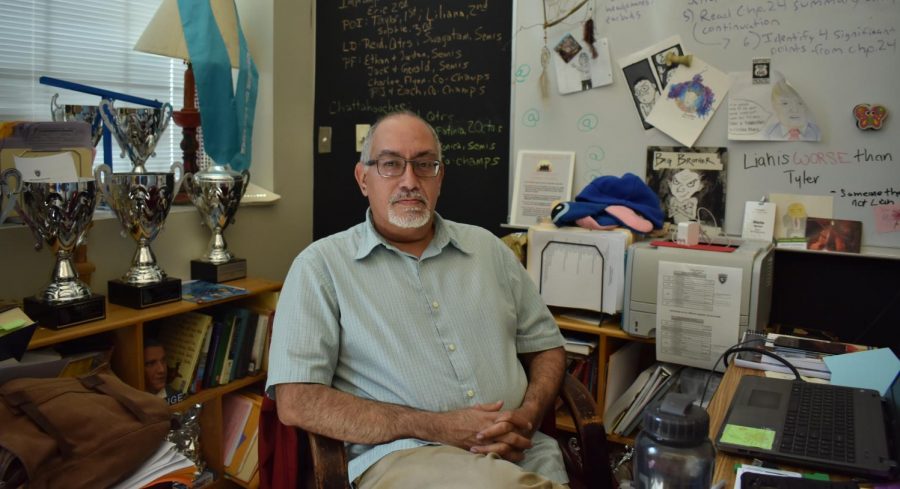 Mario Lorenzo Herrera sits in his iconic third floor classroom filled in view of hundreds of trophies and awards the debate team has won under his care.

When Mario Lorenzo Herrera envisioned his future, he never ‘in a million years’ would have seen himself teaching at a high school. However, since 2005, he has been an integral part of Grady where he also coaches speech and debate. His impact has not only been felt at Grady, but throughout the country, as he has recently been inducted into National Speech and Debate Association Hall of Fame, which only five coaches are inducted into each year.

Herrera grew up in Albuquerque, New Mexico where his father worked in human resources and employment contracts with the Bureau of Indian Affairs, and his mother managed a greeting card store. He never had an interest in school work until he joined his high school’s speech and debate team.

“I was failing English and my English teacher also happened to be the debate coach, and he was like ‘you know this would probably help your grade and you like to argue a lot,’ ” Herrera said. “And, so I went to a couple of meetings and there were a group of people, four young women, who competed on the team who kind of welcomed me and also kind of challenged me to be the best I could be.”

After high school, Herrera attended the University of New Mexico (UNM) for one year before going on to work in health care, specifically in nursing homes and rehab facilities. Throughout his career in healthcare, Herrera was coaching speech and debate wherever he could.

In 1997, the unexpected passing of Herrera’s mother changed the course of his career.

“My mom’s death encouraged me to become a teacher. She wanted to be a teacher, and I interrupted that. My mom and dad met in college, and then, all of a sudden I was on the way, so they dropped out of college and never went back,” Herrera said.

After deciding he wanted to become a teacher, Herrera went back to University of New Mexico as a secondary education major. Throughout college, Herrera remained involved in speech and debate.

He coached at a nearby high school and put together an invitational tournament, the Logo Invitational, with Trey Smith, who nominated Herrera as a hall of fame inductee.

“When I began working as an assistant coach while in college, Mario became a mentor and a friend,” Smith said. “Together, we organized a large debate tournament at the University of New Mexico, which was the largest tournament in the Southwest for many years.”

Herrera graduated from UNM in May of 2005 and was connected with Lisa Willoughby, who was the only speech and debate coach at Grady at the time, in looking for a job. In August of 2005, Herrera began his teaching career at Grady. He first taught oral and written communication and speech and forensics, and he then started teaching journalism in 2009.

He quickly fit in to the Grady community and has made a name for himself among not only students, but also the teachers.

“He’s our voice; he questions directives that are given,” said Susan Salvesen, who teaches civics and has known Herrera since 2006. “He tries to represent all of the staff in a way that will benefit everybody.”

While Herrera has loved teaching at Grady, one of his greatest joys is coaching the speech and debate team.

“My proudest moment was when one of my students, Taylor Walker, won ‘Student of the Year’ for National Speech and Debate Association in 2011,” Herrera said. “Twenty eleven was a very, very successful and competitive year. At that point, I was also still dealing with the loss of my dad, who died in 2008. So, there was this confluence of emotion, and I still keep in touch with Taylor, Lucas Bailey, who was also in the class, coaches for the team. The proudest was Taylor.”

This moment was credited in Trey Smith’s recommendation for Herrera as the next NSDA Hall of Fame inductee. Herrera has also served as president of the state debate associations of both New Mexico and Georgia. He has mentored students and coaches and has earned the title of ‘Coach of the Year’ multiple times.

“Mario’s ability to build large debate programs at public high schools was definitely an inspiration to my career. Our activity tends to be dominated by wealthier, private schools, but Mario demonstrated that success could be found in any circumstance,” Smith said. “He also encourages his students to think outside the box and is constantly pushing the envelope creatively … His mentorship of coaches and students has resulted in thousands of lives being forever altered.”

Herrera’s coaching style is driven by his passion for debate and, according to fellow teachers, motivates his students to succeed. According to Herrera, the most important thing in debate is to make people think. He tries to make sure his students are challenged.

“We have the name, the Jesters, because the jesters are the only people in the king’s court that could speak truth to power,” said Herrera. “I see it every day at school, and when they graduate, students are doing things that are changing the world, I’m glad that I get to witness it.”

Herrera never thought he would end up at a high school, but his journey here has been a largely successful one. However, according to Herrera, it’s not over yet.

“Debate led me here, and I don’t know where it’s going to lead me next. I, in a million years, would have never thought that my name would come up in the Hall of Fame,” said Herrera. “It’s cool that I get to meet coaches every year all over the country, and they are just so gracious and smart, competitive, and kind. They have helped me to become the coach that I want to be, and they are all hall of fame coaches.”