the Southerner Online • May 21, 2018 • https://thesoutherneronline.com/66685/lifestyle/locker-use-at-grady-higher-than-students-perceive/

Locker use at Grady higher than students perceive 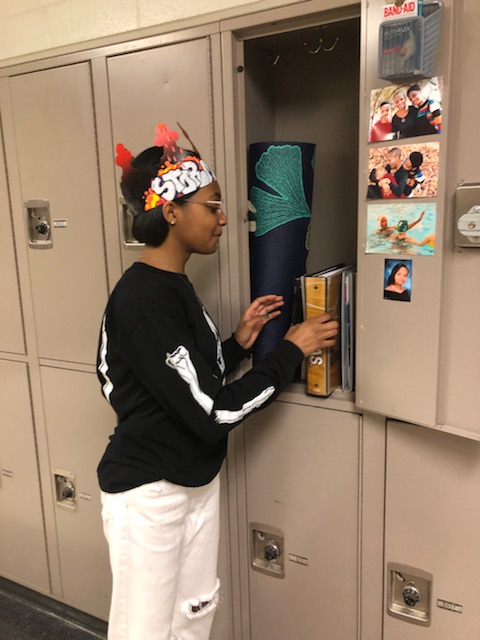 Junior Storm Wright gets books our of her locker. She is one of the few upperclassmen who utilize the lockers.

Students at Grady are not required to have a locker. In fact, many decide not pay the $5 and instead carry their things in their backpack. Although some students wonder why the lockers are present in the first place, others believe that the load of heavy textbooks and binders call for their use

At the beginning of each year, students are given the option of having a locker at a $5 fee that goes towards maintaining the lockers and changing the locks, according to assistant principal, Dr. David Propst.

Propst is in charge or managing the lockers and says that more of them are being used than students think.

However many students would estimate the number of in-use lockers to be much lower.

“I honestly never see people using their lockers,” said junior Colleen Miller. “I don’t think I would have enough time to go to a locker between classes. I only know of a couple people who do.”

However several teachers have concerns about students carrying textbooks to and from school everyday. Latin teacher Amy Leonard said she has had issues with students not bringing in textbooks because they don’t want to carry them.

“I rarely give homework from the textbook so it would make sense to just keep it in a locker,” said Leonard.

Junior Storm Wright uses a locker regularly because she plays a sport.

“I don’t like carrying around my bag all day,” said Wright. “Also I have a bad back so I can’t have all my stuff in my backpack.”

Junior Lily Muscarella believes the perceived lack of use when it comes to lockers is due to juniors and seniors keeping their things in their car.

“I remember wanting a locker last year because I didn’t have a car to keep my books in,” said Muscarella.

At some schools having a locker is required. At Decatur High School students are technically not allowed to carry backpack and must get their books during the 5 minute class transition.