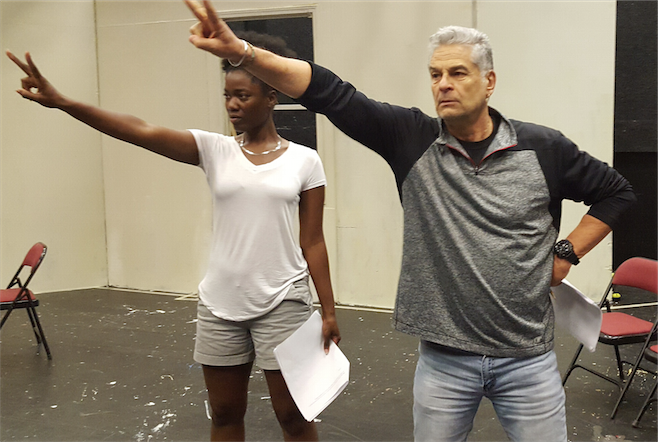 Ronalda Thomas (left) and Clayton Landey (right) rehearse at a past workshop.

A day and a half can fly by pretty quickly, but not when you’re writing and performing a play that didn’t exist hours before. And that’s just what students and actors do during the Grady Playmakers Workshop, which celebrates its tenth anniversary this month.

“It was that kind of feeling of it’ll never work, it’ll never work, and then all of a sudden it comes together at the last second,” alumnus Megan Cramer, one of the workshop’s founders, said of its early years. “It’s magical.”

Cramer started the program with Riki Bolster, founder of the Grady Writing Center and a former Southerner adviser for two decades. At the time, Cramer was living in New York and working with the 52nd Street Project, which brings theatre to underprivileged elementary, middle, and high school students in Hell’s Kitchen in Manhattan.

“When I heard about it, we sat and had breakfast or whatever and cooked up a way that she could do this here, for a short time,” Bolster said. “And it’s really short, within 26 hours each kid has written a one act, two character play.”

Applying the project to Grady’s workshop, Cramer encourages students to “tap into their 10 year-old selves” as they create.

“We just have so much fun in that imaginative creative space where we’re able to make something happen really quickly and efficiently,” Cramer said.

From the program’s first year to its tenth, not much has changed. More people participate, performances take place in the Black Box theatre instead of the auditorium, and it’s more efficient. But it is fundamentally the same.

It begins on a Friday afternoon. Students warm up, brainstorm ideas, and write a monologue. The next day, the plays are finished, rehearsed by volunteer actors and directors, and performed.

Mari Chiles, Grady alumnus who participated three years in a row, was “super nervous” her first time, but ended up enjoying the process.

For Bolster and Cramer, certain plays stood out over the years. Bolster remembers one about a self-dooming scientist and another about two men at their 75th high school reunion.

“At one point one of them has a heart attack,” Bolster said. “And the guy says, ‘well, I guess I don’t have to come to these any more!’”

Both remember Avanti Lemons’ play about a man and a refrigerator. The man was obsessed with magnets and stuck so many on the refrigerator that it eventually couldn’t be opened. The refrigerator, played by an actor, delivered monologues about how the man only saw her from the outside and couldn’t nourish her from the inside.

“I was like, ‘Yes! I’ve been that refrigerator! Let’s go!’” Cramer said. “I just wanted to have a feminist rally afterwards. It was so powerful.”

According to Cramer and Bolster, the volunteer actors are more than happy to participate. Bolster said they get “energized” by what students come up with. Clayton Landey, a local actor who will be volunteering for his fifth year, said he loves “watching the light bulbs go off.”

“As an actor it’s exciting because you just have to stand up and deliver,” Landey said. “You have no choice. You can’t get into your head. You can’t overthink.”

Cramer thinks it’s a different experience than most actors are used to, because they don’t have to worry about auditioning, reviews, or getting another gig. Instead, they get to go play.

The workshop shares similarities with Grady Drama’s Three Day Plays, in which students write, direct, and perform plays over the course of three afternoons and nights. But in the Three Day Plays, more than one student plays a role in creating the final performance.

“This [workshop] is just the playwright and their vision,” Bolster said.

For those still considering participating on April 20 and 21, Cramer encourages them to “just do it.” The only things required are an imagination and something to say.

Take Chiles, for example. She had never written a play before, and the task seemed daunting, but the experience changed her perspective.

“Whatever hesitation that you’re feeling, you should just let it go, because honestly you’re going to get something good out of it,” Chiles said.