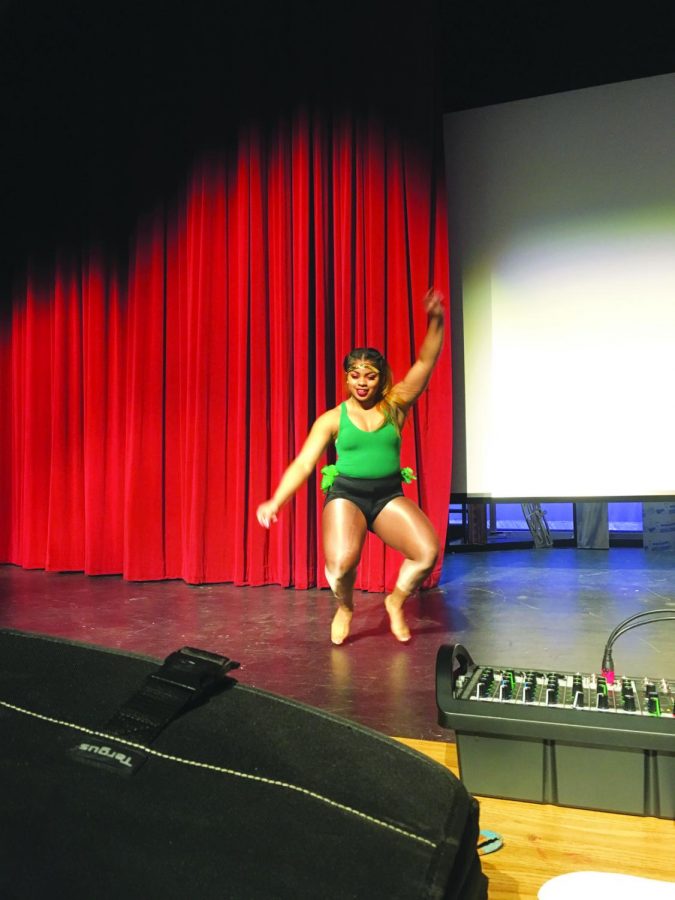 “With the performances, Grady students are able to connect [to Black History Month], especially with the spoken word,” said Executive Vice President and Miss 12th Grade Kamryn Boone. “They get to be able to express how they feel, and usually, that’s the hype of the performance, when they do the spoken word.”

This year’s program featured students from all grades, and the performances included original poetry, traditional African dances, powerful spoken word and a heartfelt song dedicated to two students’ father who was a victim of police brutality.

“This year, I was like, ‘I definitely want to be in it,’” junior Summer Dru said. “I feel like it’s important to not just show black history, but to promote it in a way, just to let everybody know that it is a thing.”

“I wrote the two pieces that were in [the program], and I decided it would be more powerful with more females, so I chose certain people to do them with who had strong speaking voices,” Dru said. “I just thought that that’s the best way that I could personally convey what I needed to say.”

Many students, including those participating in the program, were upset to find out that only freshmen and seniors would be guaranteed to see the performance due to advisement scheduling difficulties. Those grades saw the program in advisement on Feb. 28, but the rest of the grades could only see it during the evening program on Mar. 8.

“I believe that if you’re going to send a message of positivity the way the Black History Month program does, it shouldn’t be limited to a certain group,” said junior Jaylynn Glenn, who performed spoken word in the program with Dru. “You shouldn’t make it as though the opportunity isn’t there for a specific group of people because you want the message to get out there, and you don’t want it to be limited to a small section.”

Dru felt that the students who weren’t given the opportunity to see the program during the school day would have wanted to be able to be in attendance.

“They obviously care about it, and they want to see it because a lot of times, it has everything to do with their culture and their society,” Dru said. “It shouldn’t be something that’s a privilege, it should be something that’s guaranteed or even required.”

In addition to honoring Black History Month through the performance, the SGA included facts about famous African American historical figures in daily intercom announcements during February.

“Hearing the daily Black History Month facts, some students have told me they never knew about some of the people mentioned,” Executive President and Mr. Grady Aaron Burras said. “That means a lot because Black History isn’t taught regularly in curriculum.”

Burras noted that celebrating Black History Month is especially significant at Grady because of the diversity of the student body.

“I think it’s very important because Grady is such a melting pot, and representation matters,” Burras said. “This means a lot to the African American students especially, so it’s great that Grady allows us to go over and beyond some other schools.”

However, some students believe the school can do more to celebrate African American history.

“They did a performance after school last year, and I went with my mom, but they need to do more, like maybe put posters of historical people up around the school,” senior Ashia Hill said.

Hill recognizes that the celebration of Black History Month has improved during her time at Grady.

“We could be doing more, but I think the people who do the program really care by having the program in the first place,” Hill said. “I don’t remember having [the program] in ninth grade.”

In past years, other organizations in Grady’s student body have been involved in Black History Month celebrations and recognition.

Members of SGA and Royal Court wanted the entire student body to be involved in the Black History Month festivities.

“We want to make sure that the students really understand that it is Black History Month, and they are a part [of the celebration],” Boone said. “We want all different types of races and ethnicities to be a part of this, so it’s not just African Americans. We want everyone to feel a part because we are diverse, and we are a community, and we want it to stay like that.”

While many Grady students actively celebrate and recognize Black History Month, Glenn recognizes that it’s necessary to get the entire student body involved to remind them why the month is important.

“Sometimes, you forget that some things still are occurring, and even with things that have occurred, people forget about that later,” Glenn said. “It becomes like a ‘life still goes on’ type of thing, but sometimes, you have to be reminded of things that still need to be fixed even though life goes on.”

Celebrating Black History Month has always been significant to the Grady community, but Boone argues that recognizing this honorary month is more important now than ever.

“With everything going around socially in our community and also in the world, we don’t really sit down and recognize all of the achievements that African Americans have done and the history that we’ve had in our past,” Boone said. “Being able to focus on that for a month is really amazing.”